For decades, big alarm monitoring companies such as ADT have dominated the home security market by offering huge upfront savings on professional alarm installation and then charging high fees as part of a multiyear contract for professional monitoring services.  Due to the necessity of installing equipment, the high cost of monitoring, and the long-term contracts, wealthy homeowners historically represented the overwhelming majority of home security customers.  Meanwhile, the alarm companies completely ignored young, lower income renters living in less safe neighborhoods.  This inconsistency led to the 2006 founding of SimpliSafe, a company looking to capture the rental security system market with new technology and a new business model.

SimpliSafe’s founder, Chad Laurans, a Harvard graduate, first decided to attack the home security market after burglars robbed several of his friend’s apartments while they were in college [1].  He looked at the $17.5bn in 2006 home security sales [2] and the fact that approximately 37% [3] of Americans rented their homes and saw an opportunity to apply new technology to a stodgy industry.

SimpliSafe’s competitive advantage stems from the ease of installing a wireless system using adhesive tape and then easily transporting the system upon moving.  Unlike traditional players, SimpliSafe charges full price upfront for equipment (starting at $230) that is easy to install and then charges more reasonable fees ($15/month and no contract) for professional monthly monitoring [4].

The equipment consists of a series of different types of sensors connected via a wireless network and a command center that links to professional monitoring services through a provided cellular link.  The product resonates even more with its target audience by not requiring a landline, something many Millennials have never had as adults.  Customers can easily add or subtract sensors to the system and the sensors have different functions, such as motion detection, glass breakage, and smoke detection.  Upgrading to a higher monitoring service for $25/month allows customers to remotely program the alarm using a cell phone.

Figure 1. Market share for self-installed alarm systems, such as SimpliSafe’s, is expected to grow significantly over the next 20 years [5]

Security researcher Andrew Zonenberg rocked SimpliSafe’s world in February 2016 by publishing a blog post detailing how a person with a second SimpliSafe system, a microcontroller board, and rudimentary coding skills could bypass the SimpliSafe system [6].  The equipment, purchased for $250, combined with C Language code, allowed him to capture the frequency used to disarm the alarm system and then parrot it back using his equipment (could be replicated with equipment valued at $50) [7].  Unfortunately for SimpliSafe, multiple mainstream media sources picked up the story, delivering a strong reputational blow to the company.

It turns out that SimpliSafe is not the only security system to succumb to this threat as ADT was also caught using unencrypted signals in its wireless offering [7].  While the Internet of Things presents many enticing opportunities, it also makes all involved systems vulnerable to hacking attacks. 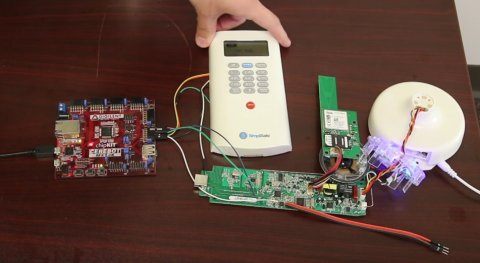 SimpliSafe’s response to this threat was weak at best.  The company posted a blog article dismissing Zonenberg’s findings as unrealistic and pointing out all the ways in which SimpliSafe is immune to traditional burglar’s methods that were completely unrelated to Zonenberg’s claims [8].  This tone-deaf response didn’t address SimpliSafe’s fatal flaw- the company failed to design its hardware to receive routine firmware updates.  Consequently, the company is unable to provide a software update and is virtually helpless to solve the problem.

As companies continue to innovate in the digital transformation space, they must ensure that they can continually update their products with software patches.  Companies like Tesla are already doing this, allowing existing owners to benefit from software updates [9].

SimpliSafe should respond by sending each of its current subscribers a USB flash drive loaded with firmware to address the security threat.  Like other Internet of Things providers, SimpliSafe should design future hardware to allow wireless software updates that can address new threats.  While this post points to a specific issue at a small company, all Internet of Things companies will have to harden their defenses against bad actors.

[8] “Our Commitment to Your Security,” http://simplisafe.com/forum/customer-support-forum/installing-and-using-simplisafe/our-commitment-to-your-securi, accessed November 2016.

Note: The author gained much of the knowledge provided in this blog post as a former customer.

The Ever Expanding Reach of Blockchain