Tesla is a company with highly effective business and operating models that have jointly contributed to the spectacular success of the company since its founding by Elon Musk in 2003. Tesla’s 2012 introduction of the Model S revolutionized the auto industry by creating an electric vehicle with a 240 mile range (compared with a 93 mile range for its next competitor). When Tesla unveiled the Model X, the world’s first electric SUV, in September 2015, the company had already amassed a waiting list of 20,000 prospective buyers.

Since its 2010 initial public offering, Tesla’s stock price has performed commensurate with its success, increasing from $17 per share at its IPO to $291 per share at its all-time high and $236 today.  Tesla was only able to achieve this level of success due to the strategic alignment of its business and operating models.

Tesla’s business model is to design, develop and manufacture high-performance electric vehicles.  Tesla’s core capabilities that allow it to deliver on this business model are its powertrain intellectual property and its significant in-house design & engineering team.

Tesla’s core intellectual property is contained within its electric powertrain and its ability to design a vehicle which capitalizes on the uniqueness of an electric powertrain. Tesla’s in-house design & engineering team redesigned the industry-standard chassis and heating & cooling systems as well as built low voltage electrical systems that significantly reduced the load on the vehicle battery pack, thereby maximizing the mileage range of the vehicle. Tesla specifically hired team members with competencies in computer aided design and crash test simulations, which significantly reduced the product development time of new models, and in light-weight materials, a very important characteristic to maximize mileage range in electric vehicles.

Tesla’s business model is supported by its operating model that transforms the firm’s assets (labor, intellectual property, capitalized assets, and final products) into valuable products through its sales and distribution network, low inventory maintenance system, and a widespread network of supercharger stations that are free for use by Tesla customers.

Tesla markets and sells its cars directly to consumers through an international network of company- owned stores and galleries. This enables Tesla to offer a premium customer experience while achieving operating efficiencies and capturing sales and service revenues that traditional auto manufacturers do not enjoy in the traditional franchised auto dealership model.

Tesla carries a limited inventory of vehicles at its stores and galleries and Tesla customers typically customize their vehicle when they place their order. Once the customer has selected the vehicle specifications and entered into a purchase agreement, Tesla requires a $2,500 payment to begin production, which is used to fund working capital and plan factory production.

Finally, to remove a barrier to the broader adoption of electric vehicles, Tesla has installed a vast network of superchargers throughout North America, Europe and Asia for the fast charging of Tesla vehicles for use by Tesla customers.

Specific features of the operating model that create and sustain a competitive advantage are Tesla’s network of sales and service centers and Tesla’s network of supercharger stations.  Given the entrenched franchised dealership model prevalent with all of Tesla’s competitors, it would be difficult for them to replicate the company-controlled superior customer service levels and low inventory levels achieved by Tesla. Similarly, a significant capital outlay would be required for competitors to develop a supercharger network that could rival Tesla’s 380 (and growing) supercharger centers along the country’s well-traveled highways.

Tesla’s business model has also been able to leverage Tesla’s operating model for its benefit. Tesla’s preordering and prepayment system helps Tesla fund the working capital requirements of the business and better align its production with demand for maximum utilization and efficiency. 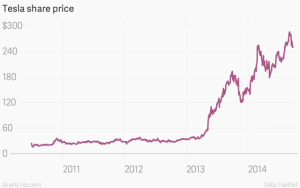 By anyone’s standards, the implications to performance of Tesla’s symbiotic business model and operating model have been phenomenal. Tesla developed and introduced an industry-defining high performance electric vehicle with long range and recharging flexibility that offers improved energy efficiency as well as reduced cost of ownership through reduced fuel and maintenance costs. Tesla’s Model S has won several awards, including the prestigious Motor Trend Car of the Year for 2013. Surveys by Consumer Reports gave Model S the highest customer satisfaction score of any car in the world in 2013 and gave Tesla Service the best overall satisfaction rating in the entire automotive industry in 2015.

Ready to purchase a Tesla for yourself? Get in line.