What’s the deal with climate change?

Coffee is a very fussy plant! In fact, the Arabica coffee varietal, which makes up about 70% of global coffee production, flourishes only in areas with a very narrow temperature range—64-70 degrees Fahrenheit to be exact—and prefers an altitude of approximately 3,000 to 6,000 feet above sea level1. As little as one-half degree changes in temperature or changes in rainfall patterns to dramatically decrease harvest yields and overall product quality2. One-to-two degree rises in temperature are even more disastrous as coffee pests, such as coffee rust and coffee borer beetles, will run rampant and further diminish product yields2.

As of today, there are 27 million acres of land across the globe which are tenable for coffee farming; however, recent reports suggest that climate change is expected to cut this area in half by 2050, putting major pressure on global coffee supply2. Further, farmers in these coffee-growing countries lack the resources to adapt to issues caused by climate change on their own.  Alarmingly, many are instead choosing to abandon coffee farming completely3.

As a result, many consider global climate change to be the most critical threat for the coffee industry in coming decades. As the global leader in coffee retail sales, Starbucks will be majorly impacted by the effects of climate change on coffee supply.

What’s Starbucks doing about it?

Understanding the gravity of this risk to its business, Starbucks has put together a robust plan to address climate change. Exhibit 1 shows the typical coffee supply chain which consists of three phases: Cultivation/Processing, Roasting/Packaging, and Consumption4. Starbucks has established initiatives across these phases of its supply chain to both mitigate and adapt its business to the climate change challenge. 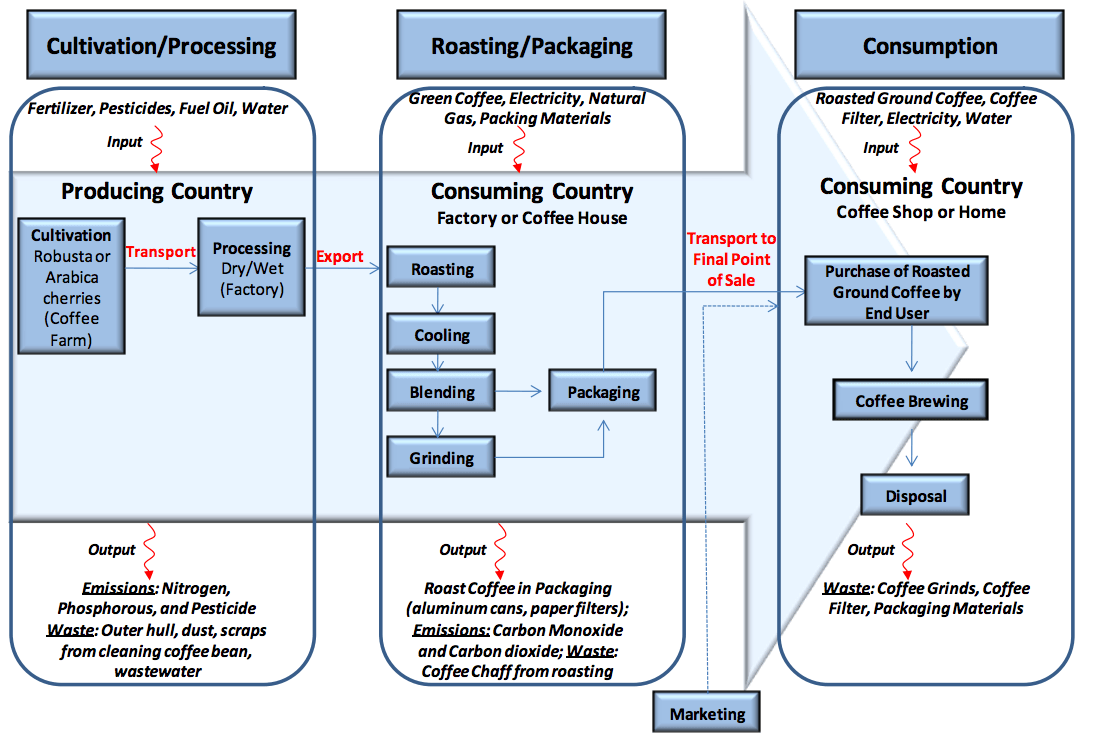 In the short-term, Starbucks has introduced measures to mitigate its contributions to climate change by decreasing its carbon footprint, or the total set of greenhouse gas emissions created from the coffee lifecycle. Specifically, Starbucks has chosen to focus on the most carbon-intensive aspect of its supply chain, the Consumption phase, which typically amounts to approximately 46% of the total emissions generated throughout coffee’s lifecycle (see Exhibit B6). Much of the carbon emissions generated in the Consumption phase are attributed to electricity usage associated with brewing coffee5. In response, Starbucks has implemented an initiative to reduce energy usage through the installation of Energy Management Systems in 6,000 of its stores6. Starbucks has also invested in Green-E certified Renewable Energy Certificates to both encourage the continued development of renewable energy sources and to offset 100% of its US and Canadian stores’ fossil-fuel energy usage6.

To address long-term effects of climate change, Starbucks has focused on the Cultivation/Processing phase of its supply chain. Specifically, Starbucks has implemented a supplier relationship management system called Coffee and Farmer Equity (C.A.F.E.) Practices to help its farmers better adapt to issues caused by climate change. This program, in combination with building nine farmer support centers and financing $50 million in farmer loans, provides farmers with the guidance and resources to adapt their farms more proactively in the face of climate change7.

Beyond this, Starbucks has also started to advocate for clean energy policy, becoming a founding member of the Business for Innovative Climate and Energy Policy, with the goal to promote widespread adoption of clean energy usage6. Ultimately, changes that are implemented through clean energy policy adoption will help Starbucks by setting a higher standard for other companies, so other companies share the responsibility and costs associated with driving sustainable practices.

Will Starbucks’s plan be enough?

While Starbucks has done much already to address its risks associated with climate change, it could do more. In the short-term, Starbucks could more aggressively address challenges in the Cultivation/Processing phase of its supply chain through vertical integration. By acquiring and operating its own coffee farms, Starbucks would have more control to implement best practices and would be nimbler to adapt to climate issues as they come. In the long-term, Starbucks could better address challenges associated with the fragile nature of the coffee plant itself. By investing in product innovation, such as creating new varietals of coffee that are less fragile in the face of changing weather conditions and pests, Starbucks could better position its business in the continued challenge of changing weather patterns.

Reflecting on Starbucks’s plan regarding climate change, I wonder about the transportation aspects of Starbucks’s supply chain: should Starbucks look closer at its logistics departments? Exhibit B gives us an idea of how carbon intensive this part of the process can be for the industry in general, but I wonder if Starbucks has opportunity to improve in this aspect of its supply chain through closer examination.

Collaborative Robots as a hedge against Isolationism

NIKE: Is it the Sustainability Transformation of the Decade?

Student comments on Starbucks: Saving Our Coffee from the Threat of Climate Change