The impact of climate change on Starbucks

Imagine a world without your daily cup of Starbucks coffee.

This nightmare scenario could one day become a reality, as increasing levels of atmospheric greenhouse gasses begin to impact Starbucks and the rest of the coffee industry. Rising temperatures are leading to an increase in pests (e.g., coffee berry borer) and invasive fungi (e.g., coffee leaf rust) that contribute to lower overall crop yields. [1] Additionally, warmer weather and inconsistencies in rainfall patterns are expected to limit where coffee can be grown going forward. By 2050, the total area suitable for coffee production is projected to decrease by up to 50%. [2] Finally, for the coffee connoisseurs, even a half-degree-Celsius change in temperature can have noticeable effects on the flavor and aroma of their coffee. [3] 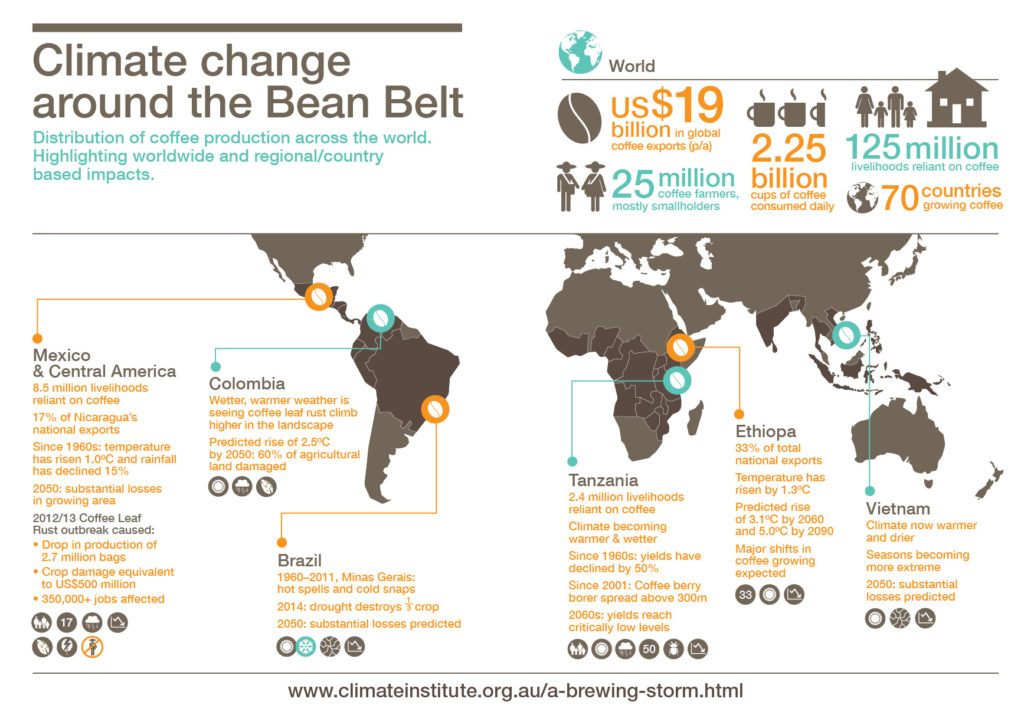 Some of these risks are already beginning to materialize. In 2014, for example, drought periods coupled with erratic rainfall in Brazil (the producer of about one-third of the world’s coffee) resulted in spikes in Arabica coffee bean prices. Farmers in countries such as Guatemala and India have had similar experiences in recent years. In the short-term, production shortfalls may result in increased raw material costs for Starbucks. However, the longer-term implications of climate change are what should really worry the Seattle-based company. With roughly 2.25 billion cups of coffee consumed globally each day and rising demand across Asia and Africa, Starbucks must ensure a more sustainable coffee ecosystem. [3]

So what has Starbucks done?

Despite its traditional role as a roaster and consumer-facing retailer, Starbucks has begun to move further down the value chain in order to bring innovative and sustainable practices directly to coffee farmers. In 2004, Starbucks launched its first Farmer Support Center. Here, and across the four other centers that have opened since then, Starbucks provides farmers with training in soil management, field-crop production, and milling processes—all important factors in improving yield, as suitable farmland becomes more limited. [4]

Furthermore, Starbucks is innovating on the coffee bean itself. In 2013, Starbucks purchased its first-ever farm and launched the Global Agronomy Research & Development Center in Costa Rica. One of the main purposes of this facility is to cultivate new disease-resistant coffee beans that will grow more effectively in harsher climate conditions. [5] In 2015, Starbucks released five new rust-resistant coffee tree hybrids through its research and donated thousands of seedlings to the Costa Rican Coffee Institute, which will assist with the commercialization of the new hybrids. [6]

Finally, Starbucks continues to utilize its corporate resources to provide direct financial support to farmers. Today, most of the world’s 25 million coffee farmers are smallholders with 3-to-5 acre plots. [3] Recognizing such dynamics, Starbucks issued the first-ever U.S. Corporate Sustainability Bond in 2016. The company will use the proceeds from its $500M offering to enhance its sustainability programs around coffee supply chain management and provide farmers with short and long-term loans made through the Starbucks Global Farmers Fund.

What additional steps can Starbucks take?

Starbucks has a responsibility to continue to tackle climate change through corporate-wide sustainability projects, such as accelerating the LEED certification process of its buildings, educating consumers on energy conservation, and reducing store waste. On a more strategic level, while maintaining its firm commitment to coffee farmers, Starbucks should also consider further diversifying its product portfolio. Acquisitions of non-coffee brands such as Teavana and Evolution Fresh allow Starbucks to hedge against the risks surrounding the coffee industry.

In order to specifically ensure the sustainability of its coffee supply chain in the long-term, however, the single most important thing Starbucks must do is take a firmer stance against deforestation—both for itself and its farmers. With rising temperatures, coffee farmers will inevitably look to move further upslope in search of better farming conditions. Because tropical forests currently make up 60% of the landscapes with climate amenable for coffee production, experts believe that this upslope migration could accelerate deforestation. [7] By collaborating with farmers and shifting their focus to sustainable practices that increase yield, Starbucks can limit some of this deforestation.

In recent years, Starbucks has been criticized for its weak procurement policies around wood, paper products, and palm oil. These raw materials are large drivers of deforestation, and Starbucks itself received a score of 10 (out of 100) in 2015 for its limited use of deforestation-free palm oil. [8] While the company has recently stated to the public its commitment to pursuing a zero-deforestation policy, many are critical of Starbucks’ lack of specificity. In order to have credibility and success in holding the entire coffee value chain to high standards around sustainability, Starbucks must first refine some of its own internal procurement policies. (780 words)

Are partisan politics and crony capitalism to blame for the decline of the coal industry?

Ship Happens! How the U.S. Navy is adapting to and fighting climate change.

Student comments on Starbucks: Impact of Climate Change on Your Daily Cup of Coffee