On April 17, 2017, Suniva, a solar panel manufacturer based in Georgia, filed for bankruptcy. Just nine days later, the company filed a Section 201 trade case petition, citing the importation of cheap solar panels from China as the reason for its failure. SolarWorld, another U.S.-based panel manufacturer, joined the petition, arguing that the flood of imported solar panels significantly harmed the domestic market. [1] The companies requested a 74 cents/watt floor price for imported solar panels, which is approximately 61% more than the average price of panels at the end of 2016 and more than twice as much as the forecasted price in 2017 (Figure 1). [2] The petition was sent to the U.S. International Trade Commission (ITC), which unanimously agreed that significant damage was caused by the importation of foreign solar panels. The ITC issued three recommended solutions, including a 35% import tariff. On November 14, 2017, the case was handed over to President Trump, who has 60 days to make a decision. [3] 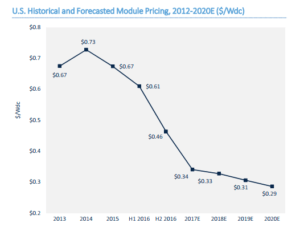 The Impact of Closing Our Borders

While Suniva and SolarWorld claim that their proposed import tariff will protect the domestic manufacturing industry, this isolationist move will hurt the U.S. solar installation industry. These installation companies pitch to homeowners using fragile return on investment calculations, which rely heavily on declining panel prices to show short payback periods for customers. This trade case would result in a sharp increase in equipment prices, which would make systems unaffordable for the majority of homeowners across the country.

The leading solar installer, with almost 26% of the U.S. residential solar market in 2016, is SolarCity, which was acquired by Tesla in November 2016. [4] The acquisition was deemed by several analysts as a bailout, given SolarCity’s high cash burn rate. [5] At the time, SolarCity’s core product was the residential solar lease. With a solar lease, the homeowner allows SolarCity to install panels on his/her roof at no cost to the homeowner. Subsequently, the homeowner pays a flat monthly rate to SolarCity in exchange for electricity over a 20-year term. Under this financing model, SolarCity was burning large amounts of cash to pay upfront for their customers’ solar equipment. This model was unsustainable, provoking SolarCity to start offering a loan product, through which customers owned their system and paid a third-party financier for the loan over time. Loans have gained popularity due to the falling prices of hardware, which makes it more economic for homeowners to own their systems. However, with the proposed import tariffs, Tesla will have to revert to its cash intensive lease product.

Preparing for a Cloudy Future

Since the acquisition of SolarCity, Tesla has made significant changes to the solar business model. Luckily, some of these have set the company up for success relative to other companies in the face of the proposed import tariff. In August 2017, Tesla started production of solar cells from its Gigafactory in New York. They also announced a doubling of their target capacity from this factory, from 1 GW to 2 GW per year, although the factory won’t even reach its 1 GW capacity until 2019. [6] Tesla’s domestic solar panel production will allow the company to avoid import taxes established through this trade petition.

While this is a significant competitive advantage for Tesla, the ramp up of the factory has been slow. Accelerating this ramp must be a focus for the company in the short term to quickly grab market share from installers that lack domestic manufacturing capacity. In the long term, Tesla should make investments to drive greater capacity increases at their Gigafactory beyond 2 GW. Furthermore, Tesla has announced that a significant portion of the factory’s initial capacity will be dedicated to the production of a new “solar roof” product, which replaces the shingles of a roof with glass solar tiles (see Figure 2). Although this is attractive technology, it costs more than double the cost of regular panels on a per watt basis. [7] Like Tesla’s first electric vehicles, this is a product for the wealthiest Americans, not for the mass market. If import tariffs are imposed, Tesla should shift focus back to their less expensive, traditional solar panel product for greater market penetration. 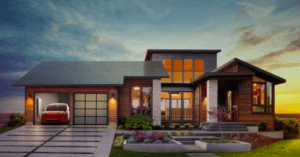 Last year, SolarCity/Tesla announced new services for utility-scale projects. [9] Utility-scale systems cost significantly less than residential-scale systems on a per watt basis, which means utility projects are more exposed to increases in panel prices and are much less attractive under increased tariffs. As such, Tesla should stop investing in utility projects in preparation for the impending increase in isolationism.

Important questions remain: can Elon Musk do anything to convince Trump to consider installation jobs AND manufacturing jobs? Does Tesla stand to benefit more from increasing its market share or will they ultimately lose out as the solar market shrinks?

For Some, Finding A Match Is About Life And Death

Student comments on Solar Panel Import Taxes: The Death of Tesla and the U.S. Solar Industry?