The UNEP has cited the winter tourism industry – particularly the ski industry – as one of the most vulnerable industries to the impacts of climate change [1].

To name only a few examples of the effects of the global warming, ski area operators are experiencing decreasing areas of snow cover, less snowfall, melting glaciers, and shorter snow seasons. According to the Climate Change Report of the IPCC, the snow cover area in the Northern Hemisphere during March-April is expected to decrease every decade by 1-2% [2]. Simultaneously, the snow season is expected to be shortened by more than 5 days every decade [2].

These alarming figures become even more worrisome when considering the direct implications this can have on the ski industry. Exhibit 1 shows the effects of rising temperatures on the future natural snow-reliability of ski areas in the European alps [3]. Even if it would be possible to limit the global warming to 2° C (3.6° F) by 2050, the number of naturally snow-reliable ski areas would drop by 34% from 609 to 404 with Germany being the most sensitive of the countries in the European alps region (>80% drop) [3]. 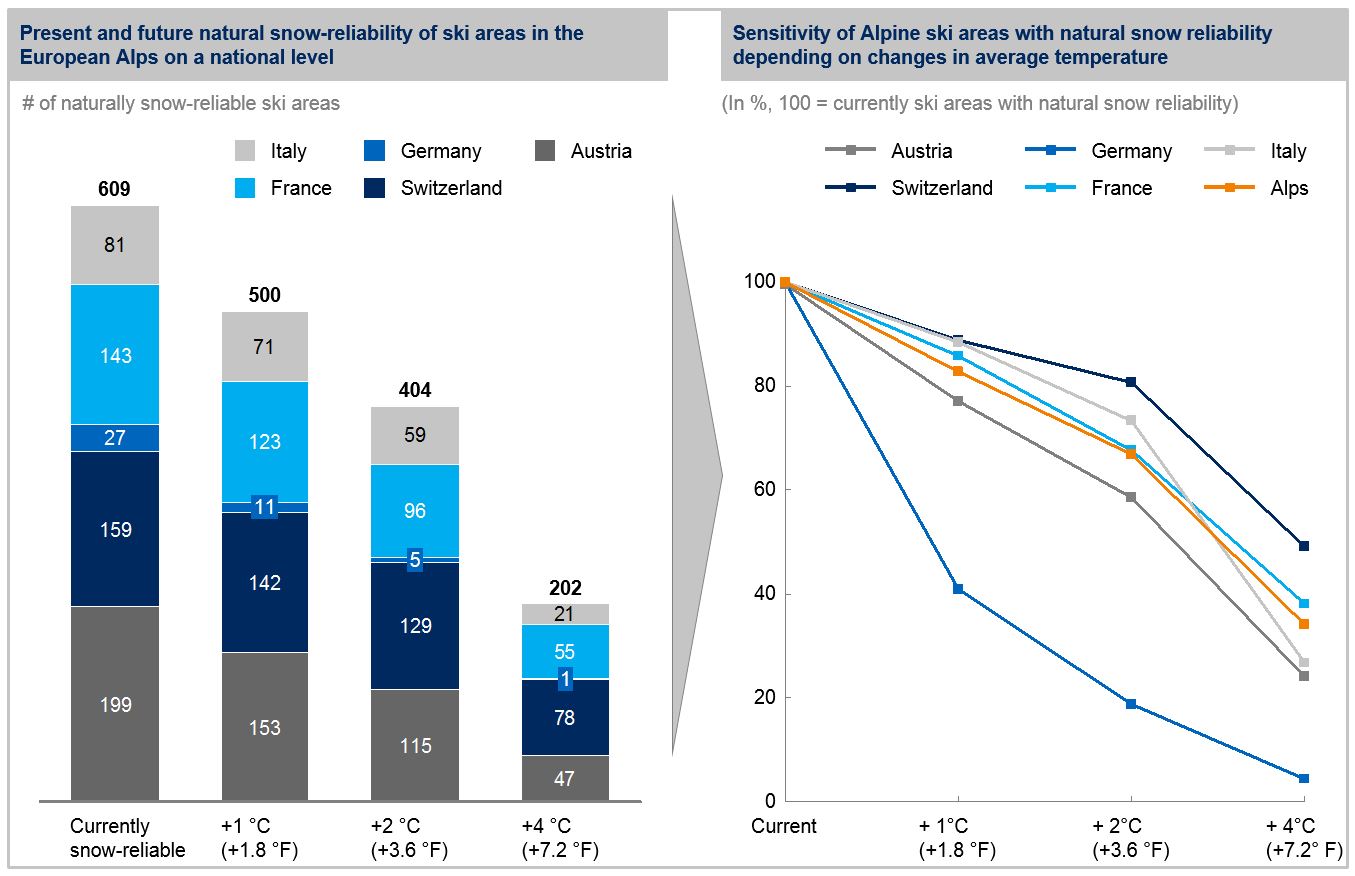 The outlook in the U.S. is unfortunately comparably drastic: “Without intervention, winter temperatures are projected to warm an additional 4 to 10 degrees Fahrenheit by the end of the century […]. Snow depths could decline in the west by 25 to 100 percent. The length of the snow season in the northeast will be cut in half.” [4]

The different adaptation measures can be subsumed under 3 main strategies, of which Whistler Blackcomb (WB) applies all of them. They are summarized below in Exhibit 2.

I. Maintain and protect current business

When remaining within the current business, ski area operators apply various technological measures to react to the developments initiated by climate change. The most familiar climate adaptation is the use of artificial snow machines. Although snowmaking can entail huge investment and operating costs (~US$ 600,000 investment costs + US$ 18,000-30,000 annual operating costs per kilometer of ski-slope [6]), economic benefits often outweigh the high costs by extending the average ski season by 55-120 days [7].

Other secondary adaptation measures include:

WB provides one of the most technologically advanced snowmaking systems with over US$ 60 million invested in >270 snow guns fed by 3 reservoirs and more than 40 employees working around the clock to oversee the snowmaking [9]. As climate change progresses, snowmaking machines are being installed in higher elevations. Just recently, WB has started to install machines on the Horstman Glacier at above 2,000 meters of elevation [10].

As one of the pioneers in operating ski areas in the Northern-American region, WB also recently started to deploy glacier blankets on the Horstman Glacier to improve summertime snow retention [11].

Some ski area operators choose to decrease their vulnerability to climate change by diversifying their revenue streams to areas that are not negatively affected by the global warming [5].

Also here, WB is reacting faster than many other ski area operators and has recently launched a US$ 345mn investment plan that includes an enormous indoor waterworld, biking & hiking trails, and luxury accommodation to diversify its revenue streams [12].

A different strategy is to reduce overall financial risks by either directly purchasing snow or temperature insurances or by merging/cooperating with other ski areas. This increases capital and marketing resources and significantly decreases vulnerabilities through regional diversification (ski conditions can vary significantly even at nearby ski regions).

Here again, WB became active early on by combining the Whistler area with the Blackcomb area through the Peak 2 Peak gondola to provide access between two ski areas without having to go down to the base where snow levels are much lower [11].
Additionally, WB just received a friendly takeover-offer from Vail Resorts over US$ 1.4bn that could further drive the consolidation of ski area operators.

Concluding, WB showcases how ski area operators can use adaptive measures to react to the expected drastic developments. If this however proves to be sufficient, is yet to be seen.

Student comments on Slippery slope: Climate change is melting away skiing business – how Whistler Blackcomb innovates to stay ahead of the slush