Infosys, the second largest outsourcing company in India’s $150bn IT services industry, was built on a simple trick: to make your company’s IT costs disappear! Behind the curtain, these functions reappear at a much lower cost in India; the issue however for western administrations is that IT jobs disappear with them. In the US, this job-disappearing-act has recently drawn ire from both sides of the aisle with Democratic Senator Chuck Schumer calling outsourcing companies “chop shops” and fellow-muggle Donald Trump pushing to levitate the minimum salary for  Infosys’ lifeline H1B visas from $60,000 to $130,000 – a move that ward off up to 95% of its would-be outsourcing immigrants [1]. This protectionist restriction would significantly stymie the ability of companies like Infosys to do business in their largest market. Meanwhile in Europe, major Infosys clients appear uneager to embark on transformational IT projects given the uncertainty of Brexit. Like the US, Britain has also raised the minimum salary for visas by 50% while british banks such as RBS have cancelled or postponed large contracts with Infosys in the wake of the referendum.

To be clear, the industry was facing secular decline before protectionism was in the cards. Big data analytics, A.I., Apps, Cloud Computing and the internet-of-things have conjured a new wave of tech that is changing the way that Infosys’ customers see their IT requirements. Why maintain data infrastructure in India when the cloud can do that cheaper? Why fork out for expensive tailored software when “there’s probably an app for that”? As Infosys’ ex-CEO Vishal Sikka recently incanted: “We will not survive if we remain in the constricted space of doing as we are told, depending solely on cost arbitrage. If we don’t [shape up] we will be made obsolete by a tidal wave of automation and technology-fuelled transformation that is almost upon us” [2]. There are signs that Infosys is already feeling the pain of commoditisation with recent deals won at ever lower margins. In addition, the company has chronically underinvested in R&D compared to western rivals such as Accenture, investing only 0.5% of revenues vs Accenture’s 2% [3]. 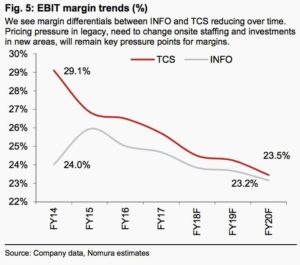 Does this all spell disaster?

Perhaps as if under a Trumpian hex, InfoSys announced plans to hire 10,000 American workers over the next two years rather than continuing to solely apparate workers from India. This strategy is unsustainable as it unwinds the entire business model of outsourcing to take advantage of salary arbitrage – for example, the typical IT Indian worker can expect to be paid $5,000 while their US counterparts can expect north of $100,000 [3]. However, long-term, it may be the only way to reverse the company’s bad juju by simultaneously buying plenty of time for the existing business to continue in Trump’s America and searching for the next potion to transform the business for the future. Like Infosys, other global firms such as Siemens and General Electric are ‘localising’ their supply chains, jobs and production. While Infosys’ direct competitors, TCS and Wipro, have handled the threat of protection differently by investing in ‘near-shore centers’ to serve their US clients from countries such as Mexico without visa restrictions.

Another anti-protectionist potion is for the business to become ‘intangible’ and compete directly with the host of new tech entrants. In this vein, Infosys has started a VC-like fund called Infosys Innovation Fund to work on big data, A.I. and cloud computing. Since inception, the fund acquired cloud management firm Cloudyn and drone-maker ideaForge as well as LP interests in several other VC firms [5]. In addition, Sikka brought on acquisition specialist Ritika Suri as well as a Google engineer Sudhir Jha to push Mana (not this author’s pun), the company’s artificial intelligence platform.

Alchemy – how can Infosys turn its business into gold

Infosys has made steps in the right direction both by localising the business and expanding into new tech products, but it is unclear whether the steps taken thus far are simply slight-of-hand. Looking into the crystal ball, the company should now lay out an action plan that uses digitisation, A.I., big data and cloud computing to transmute the old business into the new. These technologies could allow the expensive new US workforce to focus on high value new products and relationships while also creating huge efficiencies in the existing Indian business. The company doesn’t need to be at the vanguard of technological breakthrough but it does need to be able to design and implement new-tech systems to their clients’ delight.  This emerging new-tech focused business will be less vulnerable to protectionist policies and will provide a shot at magical growth for years to come.

When the oldest industry collides with the newest trend

Student comments on Outsourcery: Will Infosys lose its magic?