With population growth and rapid urbanization in China, major cities are experiencing worse than ever traffic congestions and air pollution related to tank-to-wheel emissions. Use Shanghai as example, the number of cars registered in the city rose 13 percent last year to almost 2.5 million, compared to 2.2 percent growth in city’s road network.[1] Similar problem in other metropolitan areas resulted in tightening regulations from government such as limiting the number of new vehicle license issued annually, restricting weekday usages based on license plate numbers, promoting shared transportation and free government sponsored city bikes. Despite the growing car ownerships, bike remains a major way of transportations for Chinese. Moreover, with economic development, increased awareness in health and exercise in the past few years, cycling has become more popular again.

Applying the share-economy concept, a couple bike-share startups have emerged, with MoBike being one of them, and have raised a combined $200 million investment to fund future growth. Facing increasing competition from free city bikes funded by public sector[Figure1], is MoBike “growing” to make a difference? 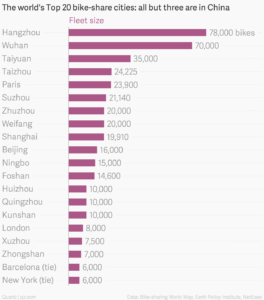 1.There are no bike pick up/drop off stations. MoBike allows you to locate any available MoBikes nearby, rent for just 1RMB ($0.15) per half hour, then drop the bike off wherever you like in the city, rather than search for a depot as with the government-run alternatives.

2.There are no keys. No more losing keys or carrying one in your pocket. With QR code on every bike, you can lock/unlock bikes with mobile device in seconds.

3. Theft prevention. In order to locate each bike at any location, each bike is equipped with a GPS, which also helps to find lost/stolen bikes. 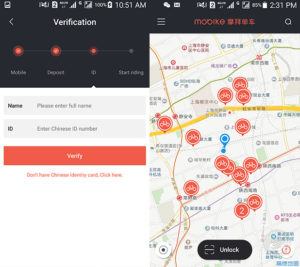 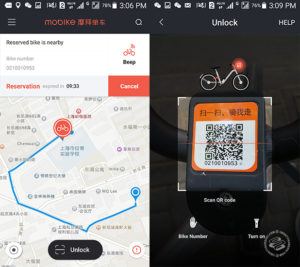 Besides these above differentiators, MoBike also considered potential causes to a bad customer experience. For example, when a customer located a nearby MoBike, walked over only to find it is broken, it will hurt the company image of being convenient and reliable. To prevent that from happening, the company decided to design and customize all their bikes to address these specific needs, requiring their bike manufacturer to provide extended quality warranty, to minimize cost resulted in broken bikes. Via customization, they also simplified bike design to the bare minimum, removed accessories such as racks and baskets, to avoid customers leaving trash on the bike and leaving bad customer experience to the subsequent riders.

Some people argue that sharing-economy could be on the opposite side of benefiting the environment[2]. The idea is that when people share resources, the cost lowers for individuals who consume the resources, and they end up use more of it. It is still early to proof how much emission is saved from people who shift vehicle usage to bikes, but hopefully the economy of scale in the bike sharing business will promote more people to give it a try.

Swept Away: Municipalities drowning in the flood

Student comments on MoBike – A Sharing Economy That Go Green