With US$4.3bn sales in 2016, supplies over 50 customers worldwide through 36 manufacturing plants in 16 countries. 90% of the Company’s sales were exported to the US, mainly to the Detroit giant-OEMs (GM, Ford, and FCA) under NAFTA’s free trade scheme. Uncertainty around the potential cancellation such agreement and the uncertain shape trade is made across between Mexico and the US crystalized as a concern for Nemak’s management since November 8th, 2016, date of the US Presidential Election, especially as investors reaction has already driven Nemak’s share price down ~60%2.

Even when Nemak exports autoparts (not assembled cars) to US OEMs under a Free On Board scheme (OEMs are responsible for transportation and logistics, including border taxes), assuming a full pass-through of higher prices to final customers are expected to lower the demand for new cars in the US market. Increased inventories are expected to force OEMs to reduce production by 3% due to NAFTA, according to HIS Markit (GM is expected to fall 18%; Ford 1%; FCA 7%). North America represents close to 60% of the Company’s sales. As September 30, 2017, Nemak has already lost ~1 million units of management expected reduction in production of 1.2 million units for 2017.3 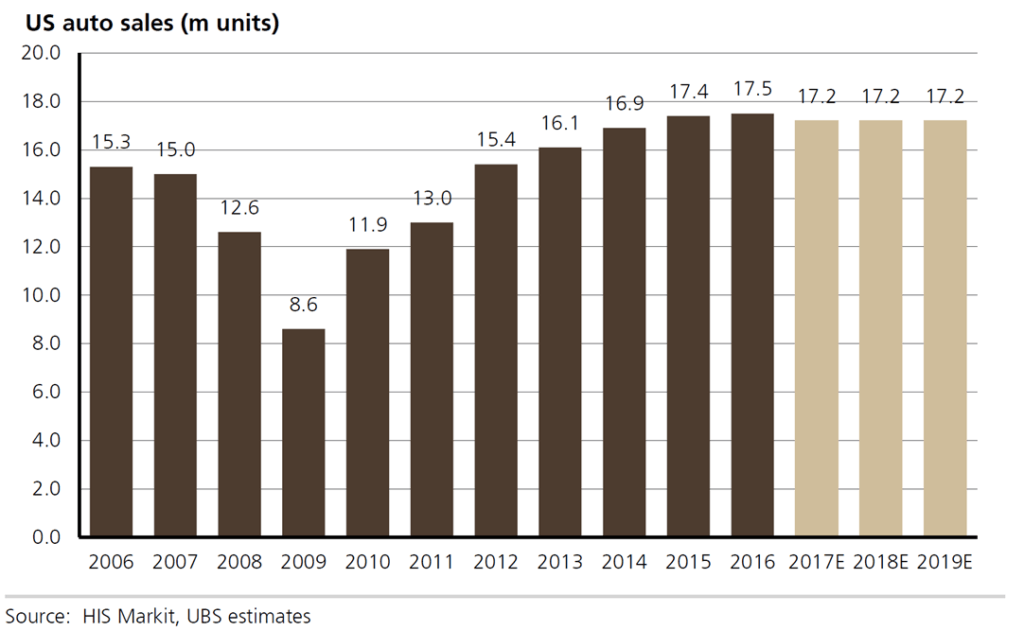 In response of the risks that NAFTA represents to the Mexican automotive industry, Nemak’s management has already implemented short term and medium-term strategies to successfully address its uncertain future.3

In the short-term – leveraging the company’s global footprint of production facilities, its strong relationships with European OEMs (and raising relationships with Asian OEMs), and its global leadership in the development and manufacturing of aluminum components –, the Company has undergone a company restructure under a “new global organization” to shift focus to OEMs in these regions and capture growth opportunities on the increasing demand for lightweight solutions for next generation of hybrids and full electric vehicle models. Looking to offset the potential reduction on the demand from the US market, Nemak appointed a new Vice President based in Europe that is responsible for strengthening the Company’s capabilities in these regions. This strategy has already shown results: so far Nemak had accumulated a book order of about US$280 million for electric and structural components.3

Targeting a medium-term objective to reach approximately US$1 billion in contracts in Europe and Asia by 2022, the company has planned a capacity and production lines expansion plan across these regions to support new program launches.3 Analysts expect this expansion strategy will require ~US$500m capex per year from 2018 to 2025 (including maintenance). Nemak expects to fund the expansion with internal cash flows, without compromising leverage and dividends.4

In addition to the Company’s management strategies to capture demand for capacity in Europe and Asia, and leveraging its strong financial position, I would recommend Nemak to remain vigilant of potential consolidation opportunities in the Mexican automotive industry. With a “firepower” of ~US$505 million for potential M&A – comprised by US$130 million in cash5 and potential additional leverage of US$375 million by increasing its leverage from target levels of 1.5x Debt/EBITDA by EoY 20173 to 2.0x (assuming a 2017E EBITDA of US$750 million6) – Nemak could acquire smaller and financially troubled players (affected by NAFTA renegotiation outcomes) with contracts to supply non-US based OEMs from Mexico. Analysts consider that non-US based OEMs such as Toyota, Mercedes Benz, BMX and Infinity, will keep sourcing components from Mexico, mainly benefiting from lower auto parts salaries (e.g. 88% lower than the US).1 In this way, Nemak could further protect its capacity and cash flows not only from its global but also from its local footprint.

Industry analysts are confident that a resilient Nemak is poised to offset the impact of potential border tax adjustments resulting from NAFTA renegotiations.1 However, should Nemak’s management assess potential reductions on global demand for producing lightweight components for hybrid and electric vehicles resulting from other countries deciding to follow Trump’s administration intent to relax the rules governing greenhouse gas emissions on new model cars produced between 2021 and 2025?7