Sparked by the industrial revolution, improvements in technology have driven dramatic increases in global per capita wealth. [1] The beneficiaries of across-the-board step changes in the quality of housing, healthcare, entertainment, communication, transportation, etc., today’s middle-class-citizens arguably live better than the royalty of the Middle Ages.

However, as economist Thomas Piketty argues in his book Capital in the Twenty First Century, the accelerating pace of technological innovation may have a pernicious, unintended consequence: growth in income inequality as workers are replaced with high return-on-investment machines. [2] Viewed pessimistically, technology could inadvertently lead to the permanent stratification of society into the socioeconomic elite that inherit vast wealth and workers that lack the capital and knowledge to catch-up.

Amidst these concerns, Knewton, a digital education company founded in 2008, is attempting to revolutionize one of society’s great democratizing forces—broad access to a high-quality education.

The market opportunity for Knewton arises from not only advancements in digital technology but also the stagnation of the education system over the past century. While the operating models utilized in most industries today bear limited resemblance to those of their 19th century predecessors, the education system in the United State remains virtually unchanged since Horace Mann, inspired by an 1843 visit to Prussia, institutionalized the factory-model classroom. Interestingly, Mann designed this large-group learning model based on a desire to ease the religious tensions between Protestants and Catholics and create a more tolerant society—not because of the educational efficacy of the system itself. [3] Mann’s blueprint places children into an impersonal, age-based and inflexible learning environment that advances students almost solely on the basis of amount of time spent in the system. [4] While this structured environment works for some, it is a self-esteem-crushing disaster for others. 32 million adults in the United States are illiterate, and 21% of all adults read below a 5th-grade level. [5]

In higher education, colleges and universities struggle to contain increasing tuitions as budgets balloon to support administrative personal and professors. Average annual fees at private universities grew to $31,000 in 2014, a rise of approximately 200% since the 1970s (see chart below). Student have struggled to keep up with the mounting bills and increasingly rely on loans. The average college student now graduates with $40,000 in debt, and student debt in the United States totals $1.2 trillion (a 3x increase over the past decade). [6][7] 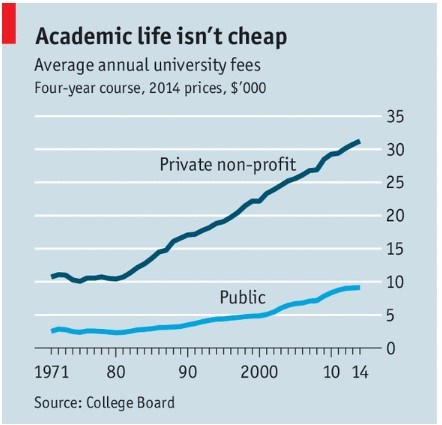 In this context, a tremendous market need exists for scalable innovations in education that will drive better outcomes at lower costs.

HBS graduate and CEO of Knewton Jose Ferreria believes his company has harnessed emerging digital technologies to develop a solution. A 1984 study by psychologist Benjamin Bloom found that students given personalized lessons performed two standard deviations better than peers in a control group. [8] Leveraging this research and work in the fields of adaptive tutoring systems, psychometrics and cognitive learning theory, Knewton developed software that integrates existing educational content into an individualized, digital adaptive learning experience for students. Developed over seven years at a cost of $100 million, the software provides users a meaningfully improved experience at a low marginal cost with benefits including: [9] [10]

Knewton is compiling compelling data on its efficacy versus traditional teaching methods. The company recently partnered with Arizona State University to create a Knewton-powered mathematics course. The impact was impressive: passing grades increased 17%, withdrawals fell by approximately 50% and 45% of students finished 12 weeks early. [13] 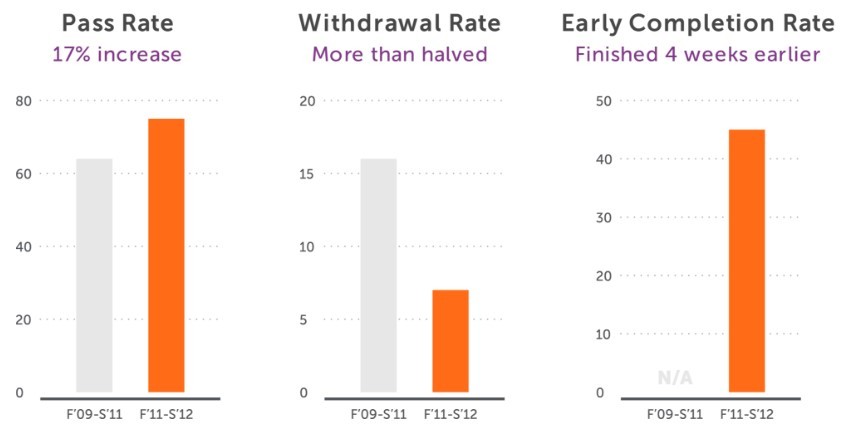 Moving forward, Knewton will have to grapple with student-privacy issues and a lack of control over the quality of the 3rd-party educational content integrated into its product. On the other hand, it has a tremendous opportunity to take advantage of the power of machine learning as it leverages a growing amount of data to generate the optimal student learning experience and further drive a performance wedge between adaptive and traditional teaching methods.

As a final thought, I’d hope to see the application of this technology extended to adult education. The accelerating rate of technological change will only lead to further dislocations in the labor markets. Affordable and effective adult learning programs are desperately needed to retrain displaced workers and help ensure society doesn’t devolve into the bleak “haves and have nots” future envisioned by Pikkety.

Student comments on Knewton: Can the Education Industry Teach Itself a New Trick?