Disney – the happiest place on earth? Not necessarily anymore. As technology facilitates broader forms of entertainment which are lower cost and easier to access, Disney’s amusement parks risk becoming relics. In studies performed in the mid-2000s, approximately 50% of first-time attendees “signaled they likely would not come back because of long lines, high ticket costs, and other park pain points” [1]. Yet, at approximately 30% of revenues, the Parks and Resorts segment is still critical to Disney’s business model [2]. Disney has committed to a $1 billion digitalization initiative that will hopefully enhance its operating model and save its amusement parks business from becoming obsolete in the face of emerging entertainment substitutes.

In 2013, with full backing of the Disney board, Disney CEO Bob Iger publicly announced a digitalization initiative to improve the customer experience, enhance operational efficiency, and increase interactivity and personalization. The multi-channel, multi-platform digital experience is named “MyMagic+”, a combination of a website, mobile application and digital wristband. 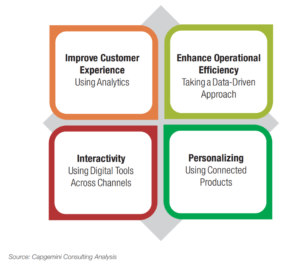 The real hallmark of the MyMagic+ experience is the Magic Band, a bracelet with a Radio Frequency Identification (RFID) chip that can be tracked by several long-range RFID readers throughout the park. The Magic Band encapsulates the four hallmarks of Disney’s digital strategy:

The Magic Band is integrated with a website, MyDisneyExperience.com, and mobile application to facilitate reservations, eliminate the need for paper maps, etc.

Despite the promise of MyMagic+, challenges abounded in implementation. The infrastructure at Disney World, which dates to the 1960s, had to be overhauled—283 park entry touch points upgraded, over 30 million square feet of Wi-Fi installed and hotel, restaurant and ride designs upgraded to integrate the MagicBand technology with design [1].

Since its implementation at DisneyWorld in 2014, the MyMagic+ has succeeded in improving operational efficiency and the customer experience. Entry turnstile time was cut by 30% and park capacity increased by over 5,000 people per day [1].

However, the digitalization hasn’t fully delivered on its promise. The MyMagic+ team faced significant pushback from Disney Imagineers, who felt cut out from its development. As the “stewards of Walt [Disney’s] creative legacy”, the Imagineers are “responsible for the design and construction of the company’s theme parks” and are instrumental to the success of My Magic+. However, they have failed to buy into the MyMagic+ vision, torpedoing various concepts and failing to integrate the technology into the broader design of the parks [1].

Additionally, MyMagic+ should be adjusted to respond to the proliferation of mobile. Although not a principal element of the original design, mobile is likely to surpass the Magic Band in adoption and versatility. Disney is already testing a more mobile-centric version of MyMagic+ at Disney Shanghai, and it should expand these capabilities to all of its parks to maximize benefits to the operating model.

With its MyMagic+ initiative, Disney has certainly hopped aboard the “carousel of progress”. Although there is additional work to be done to fully integrate digital innovations into its operating model, Disney has taken the right steps to ensure a “great big beautiful tomorrow” for its Parks and Resorts business.

In the name of transparency: TransferWise says “Bye Bye Banks”

How Talk Space has been revolutionizing the mental health industry

Student comments on Keeping “The Happiest Place on Earth” Happy