On 18 June 2017, JD.com (NASDAQ: JD), China’s second largest e-commerce company, completed a global first trial of using a robot (simple version of a driverless car) to deliver packages in China. Designed by JD, the white, four-wheeled droid can carry five packages at once and travel 20km if fully charged. It can climb up a 25-degree incline, and find the shortest route from warehouse to destination. Once it reaches its destination, the robot sends a text message to notify the recipient of the delivery. Users can accept the delivery through face-recognition technology or by using a code [1]. JD also debuted its drone delivery last year in July, and is now testing the world’s largest drone-delivery network, focused on serving rural and mountain areas which account for about two thirds of China’s lands. 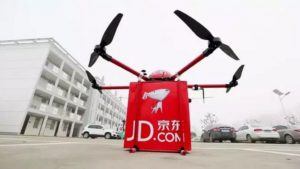 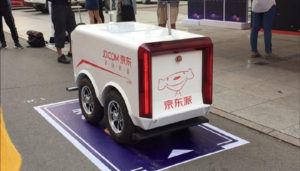 JD started as a B2C company which sells electronics and home appliance products in China through its website, at a time when Alibaba already dominated China’s C2C and B2B online shopping sector. One of the reasons JD stood out from the competition and expanded rapidly was due to heavy-investment in own logistics network and continuous efforts in supply chain improvement.

In recent years, JD has established its in-house R&D team to develop driverless programs, including drones and autonomous vehicle for the “last mile” delivery, aiming to reduce cycle time and improve throughputs. JD wants to win the race in developing self-driving technologies against other e-commerce competitors such as Alibaba (NYSE: BABA, the largest Chinese e-commerce company) and Amazon in China, both of which are also exploring ways to use self-driving technology. However, will JD be able to deal with all the challenges ahead in developing and implementing such technologies in China?

China’s e-commerce sector has been growing exponentially. Last year, the total e-commerce sales reached ~US$3.9 trillion, accounting for almost ¼ of global e-commerce revenue [2]. The sales figure on the “Singles’ Day” (11 November 2017) reached ~US$38 billion. About 1.38 billion of packages were produced on that day, await to be delivered to customers [3]. How to serve such a large volume of orders effectively and efficiently is critical for e-commerce companies to win market opportunities.

Rural area is the fastest growing market for China’s e-commerce. Total e-commerce sales in rural areas reached US$0.13 trillion in 2016, accounting for 17.4% of total national sales, twice the figure in 2015 [4]. In general, delivery to rural areas is limited by less-developed infrastructure, thus, a drone-delivery network will help tremendously in penetrating to rural markets. JD has developed its own drones and established two drone-delivery operation centers in Xi’an and Suqian cities. JD is also testing larger drones carrying products weighing as much as a metric ton, or about 2,200 lbs.

The delivery robots mentioned in the first paragraph can reduce the delivery cost from RMB7 (US$1) per human delivery to RMB1.5 (US$0.2) per robot delivery [5]. Drone delivery is also expected to reduce overall cost by 50% once drones can be operated and produced in scales. Current last-mile drone delivery cost is similar to labor delivery costs [4]. However, given overall increasing labor costs in China, autonomous delivery is attractive in reducing costs in the long-run.

In order to spearhead in driverless logistics network, JD needs to be able to deal with several challenges as follows, and needs to focus on technology R&D, production and operation cost reduction, regulation policy studies and government relationship management.

Policy and regulation risks are vital to both the applications of drone and driverless cars in last-mile delivery. Although JD has obtained flying permits from governments in certain areas, every time it flies a drone in China, it still needs to file with relevant bureaus. Driverless delivery is still in early stage and is currently only permitted in limited places such as campus or certain residential areas. In addition, how to deal with potential disputes or even lawsuits as a result of an accident is largely unknown at the moment.

Competitors are also exploring ways of using autonomous technology. For instance, SF express, the largest delivery company in China has formed up Joint Ventures to vertically enter into up and down streams of drone development. Amazon has recently launched Prime Air, a drone delivery service program. Therefore, JD needs to strengthen its R&D capability and move fast.