What does Climate Change have to do with Hospitals?

What institution operates 24 hours a day on equipment, consuming 2.5 times the energy used in other sectors, emitting 56 million metric tons of carbon dioxide equivalents per year? [1] What is the same institution which serves the casualties related to climate change? The answer is the hospital. Partners Healthcare, a Boston-based, non-for-profit healthcare system that includes hospitals like Brigham and Women’s Hospital and Massachusetts’ General Hospital, is paving the way in incorporating climate change impacts in its top priority strategy.

How is Partners Healthcare Adapting?

There are 3 main impacts on hospital systems which are impacted by climate change.

Currently, the healthcare sector’s ability to respond to climate change is nascent in development. When Hurricane Sandy hit, Bellevue Hospital and NYU Langone Medical Center both had to evacuate because electric systems and backup generators were in the basement. It took more than two months before the hospital could operate again. Spaulding Rehabilitation Hospital, an affiliate of the Partners Healthcare system, instituted changes to its operation design to face the reality of climate change. One radical change is installing all electrical equipment on the roof of the facility rather than the basement. Other design changes include natural ventilation and on-site power generation, which allow the hospital to operate even during the weather events [2]. 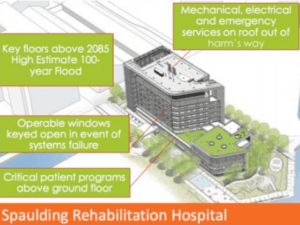 In the US, healthcare represents 18% of the of the entire GDP, and it is likely that it will increase in the future [4]. Given its enormous economic weight, the healthcare industry has enormous power in influencing the country in reducing fossil fuel usage. The US healthcare consumes 8% of the nation’s power and generates 8% of the country’s carbon dioxide emissions [5].  Hospitals release tons of regulated medical and hazardous wastes each day, some of which incinerated, into the air. Partners Healthcare is a founding member of the Healthier Hospital Initiative, which is a coalition of major healthcare systems across US to improve sustainability and safety in healthcare. Partners Healthcare’s primary goal is to reduce its energy consumption by 25% by 2020 [6].  A couple of initiatives include: 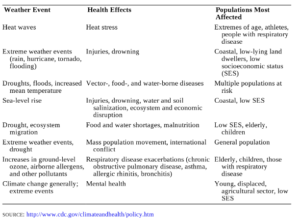 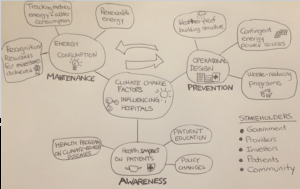 While Partners Healthcare is leading the way in many initiatives to mitigate risks involved with climate change, my recommendation is to integrate the 3 pillars of operational design, energy consumption, and patient impact into a holistic program. Furthermore, Partners Healthcare needs to consider the overall story to convey to its 5 key stakeholders: government, providers, investors, patients, and community.

Consider interconnecting operational design and energy consumption. When hospitals within the Partners Healthcare go through renovations or rebuilding, it is important to not only consider the physical construction, but also measuring system to track energy usage that is easy to use. It is important to stress that easy to track is key, as hospitals have many competing priorities in improving patient safety, speed, and quality. While adaptation to climate change might not realistically be in hospitals’ mission and vision statements, it should be outlined in the hospitals overall growth strategy. One tactical suggestion is running a monthly report on hospital usage, comparing to hospital standards. Based on metrics on energy reduction, Partners Healthcare should encourage policy makers to reward credits to hospitals.

Although energy reduction and patient outcomes may be hard to tie together, there are certain diseases such as asthma, allergens that are worsened as climate changes. Through education and advocacy, nurses and doctors are in a unique position to educate their patients about the public health impacts and be the spokespersons for energy policies to the government. Given their demanding schedules, these healthcare providers should play a more spokesperson role, and the hospital could partner with non-profit groups such as Asthma and Allergy Foundation of America and climate change forums to illustrate the long-term impact of climate change on health. Because the healthcare industry has such a large influence on market, a clear proposition would peak the attention of government and the investors.

Water Water Everywhere, Not a Drop to Drink

Carnival Corporation: A Company in “Conflict” while Cruising the C’s of Climate Change

Student comments on Is the Hospital Industry “Feeling Under the Weather”?