How can a company maintain incredibly high investor interest, despite taking nearly ten years to record its first annual net profit [1]? By building a company around eschewing short-term gains for long-term success, Amazon has been able to invest in technologies for the future. Digitization has helped optimize Amazon’s warehouse and distribution system (and created products like Amazon Web Services), and more recently brought to life two integral customer touch points.

Alexa is Amazon’s AI persona that is used on the Echo and Echo Dot devices to connect the company to your household. Amazon’s mission statement is as follows:

“Earth’s most customer centric company; to build a place where people can come to find and discover anything they might want to buy online.” [2]

Their business model relies on creating the easiest way for customers to obtain products at the best price. This new AI product allows users to seamlessly order products without typing a word or clicking a button. More conveniently, it can answer many questions and integrate into your home systems to turn on your stereo or nearly any other device with which it can connect, creating a smart infrastructure [3] and generating incredibly valuable customer data [4]. Amazon is digitizing the order process as spoken words are received and then converted into commands by these incredible machines, allowing the company to more effectively execute on their customer promise. 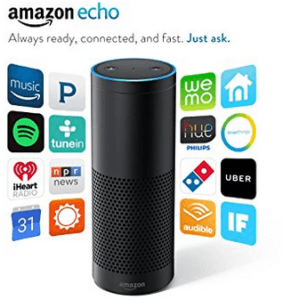 Flying into Your Home

Delivery is the opposite end of the consumer touch model. In the past several years, Amazon has invested heavily in a drone delivery system. This is viewed by some as a moon shot, but Amazon has begun proving out its technology, with tests taking place in the UK [5]. The advanced sensors on drones allow them to navigate effectively through even the most crowded airspaces by taking in massive amounts of data and converting it into directional flight inputs [6]. On a larger scale, this technology will allow Amazon to execute on its promises by autonomously delivering products exactly when and where you want them. This will improve the company’s operating model by fulfilling customer desires even more quickly.

Amazon’s propensity for massive investments has led to high profile failures such as the Fire phone, which forced Amazon to take a $170 million charge on the lost value of unsold phones [7]. In addition to reputational risk if one of these new products failed, the company is entering crowded markets. Apple’s Siri dominates iPhones, and there are plenty of other mobile assistant apps on the market.

The drone market is also crowded with companies ranging from Alphabet to start-ups. However, even if companies develop similar drone technology, when paired with Amazon’s existing service there is no company that can currently replicate the entire delivery model they envision when paired with their fulfillment centers.

Continued large investment in Alexa – Alexa has been noted by some as klunky and lacking the top voice recognition skills that a refined assistant like Siri does. In order to be adopted by the masses, the recognition and interface with Alexa will need to be seamless.

Introductions to Alexa – The two main price points for Alexa are the Echo at $179.99, and the dot at $49.99. There is an app, but reviews are putrid. Customers need a way to test drive Alexa before buying. This may be vastly improving the app, or more actively integrating Alexa into the Amazon app. This would allow customers to be introduced without downloading anything new, making the transition much easier.

Increased partnerships – Alexa can order you a Domino’s pizza with just one command [8]. An increase in the number of this type of large corporate partners will draw media attention in addition to increasing functionality.

Tightly partner with the FAA – Amazon has been testing its drones in the UK because their airspace regulation incorporated drones in 2010. Amazon is clearly making efforts to influence future drone regulations created by the FAA [9], but this is so integral to their future that massive investments must be made here because it is make or break.

Drone Safety – One of the biggest issues for individual consumers with drone delivery is safety. Where will the drone land? Can it deal with moving people and objects? Large scale public displays of the drone’s ability to avoid danger for itself, and more importantly the consumer, will help to assuage any of these concerns. Holding these displays in large cities could be a great launch event to garner attention and create a sport-like spectacle of the maneuverability and usefulness of these unpiloted machines.

Amazon has proven they are the masters of optimizing and automating internal logistics. Now they are making huge investments from the customer’s first interaction through to the last mile of delivery that will pay off handsomely.

Pictures (in order of appearance)