“Solving the clean energy problem is an essential part of building a better world. We won’t be able to make meaningful progress on other challenges — like educating or connecting the world — without secure energy and a stable climate. Yet progress towards a sustainable energy system is too slow, and the current system doesn’t encourage the kind of innovation that will get us there faster.” (Marc Zuckerberg, 2015)

Every like, every comment, every picture and every video upload on Facebook requires electricity. While the activity of an individual Facebook user might be limited, the 1.71 billion monthly active users have a massive impact on the world-wide energy consumption. Users generate 4 million likes per minute, upload 350 million photos per day, and watch 100 million hours of videos per day, resulting in a daily data generation of 4 petabytes [1].

But how do these activities actually consume electricity? What is their impact on the climate?

The carbon footprint of data

Technology-driven companies such as Facebook, Google, and Amazon store all their data in large data centers around the world. A data center is a facility where enterprise servers, storage and networking technology are centrally accommodated, operated and managed [2]. With the growth of the industry, around 8.6 million data centers on an area of 1.94 billion square feet will be running in 2018 [3].

There are mainly 3 sources of energy consumption in the centers: running servers and equipment, securing data and location, and cooling the facility. Especially the latter one requires large amounts of energy to cope with the heat produced by the technology. In 2015, data centers consumed about 416 terawatt hours of electricity (i.e., 3 % of the global supply) and accounted for about 2 % of total greenhouse gas emissions. An amount that is greater than the UK’s total consumption (i.e., 300 terawatt hours), resulting in a carbon footprint comparable to the airline industry [5].

With the global trend, also Facebook’s energy consumption increased significantly over the last 5 years; by 146 % between 2011 and 2015 (see exhibit 1).

While the mentioned scale is shocking, there is great potential in the field of data centers to reduce energy and thereby improve the carbon footprint. As a matter of fact, up to 88 % of greenhouse gas emissions can be reduced through efficient, off-the-shelf equipment and improved energy management [7]. Facebook particularly is trying to implement this kind of measures and already proved that it can be successful.

As the foundation of all efforts for energy reduction, Facebook was required to create visibility over the consumption. In 2012, as one of the first organizations, they shared numbers on emissions which were usually kept secretly for competitive reasons. However, it helped them to identify reduction potentials, send a positive message to investors and improve their brand image [8].

A more operative decision was already made in 2010: they announced to build their own data centers and resign from their previous practice of leasing space from third-party providers. Thereby, they could on the hand reduce cost and on the other hand fully control the activities in the centers, including measures for energy reduction. In the following years, Facebook built high-tech facilities across the globe, for example in Prineville (Oregon), Forest City (North Carolina) and Lulea (Sweden) [9]. Begin of 2016 they announced to build a €200m green data center in Clonee, Ireland [10]. By locating the centers in cool climate areas, they are able to use fresh air from outside rather than operating chillers. Furthermore, the locations always offered reliably electricity supply, which helped to reduce internal backup mechanisms [9].

In order to further reduce the impact of data centers on the climate, Facebook started to rely more and more on clean renewable energy. Exhibit 2 shows that already in 2015 the majority (i.e., 35 %) of their energy consumption was covered by non-fossil and non-nuclear sources. 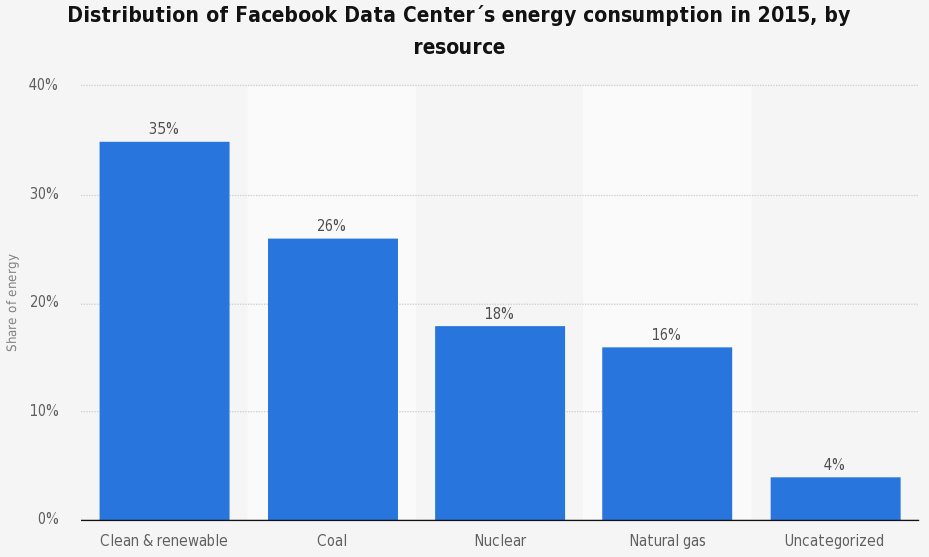 Just recently, technology giants such as Facebook, Google, Amazon and Microsoft joined the Renewable Energy Buyers Alliance (REBA) consisting of overall 60 US corporations. The first goal of the alliance is to create commitment among its members to solely use renewable energy for their operations in the future. Secondly, they aim to actually build the renewable power capacity by establishing solar and wind energy farms to add 60 gigawatts to the US grid by 2025 [12].

Solving global warming is not the responsibility of a single organization or country. However, acting as a pioneer and example is the cornerstone for great initiatives and collaborations like REBA.

Chemours: How Chemicals are Helping to Cool Climate Change

Student comments on How your Facebook Likes contribute to global warming