Climate change is such a massive and intractable threat that it will have unforeseen consequences on organizations seemingly far removed from its direct effects. Conversely, there are organizations with business models so fundamentally at odds with any ideal response that we tend to overlook the potentially valuable ways they can still contribute. The Hess Corporation is such a company.

I’ll set aside the industry’s elephant in the room—the future of oil & gas in a world with a changing climate and its operational impact— instead focusing on approaches that an independent U.S. oil & gas company can take without flouting its core business or fiduciary duty to shareholders. I’ll address the industry context and what Hess is doing today before assessing some response areas where the company could be supportive and possibly even proactive. While these prescriptions may seem frustratingly limited in scope, it’s valuable to acknowledge oil companies’ strategic restraints and still pinpoint feasible initiatives that they can publicly support. To combat climate change, the more buy-in the better—wherever we can cultivate it.

Hess’ climate change response is shaped by its obligations to investors as well as the industry’s overwhelmingly conservative standards on this issue— particularly in the context of a low oil price environment where performance has lagged and shareholder pressure has intensified.

Hess has demonstrated success in reducing operations emissions, curbing equity GHG by 5 million tons between 2008 and 2015 (1). They’ve also taken steps to reduce methane emissions and contribute to prevailing research on the topic (2). Hess acknowledges the very real threat that climate change poses in its financial reports and public messaging (3). For context, these limited actions place Hess in good standing with regard to peers: for example, despite nearly three times the market cap, Phillips66 has no stated climate change policy and only includes climate change in its annual report to warn investors that global response could threaten Phillips66’s business (4) (5) (6).

Against this backdrop, where could Hess be more progressive? Below, I list approaches within the four main mitigation strategy types, as outlined in McKinsey’s Abatement Report (7). 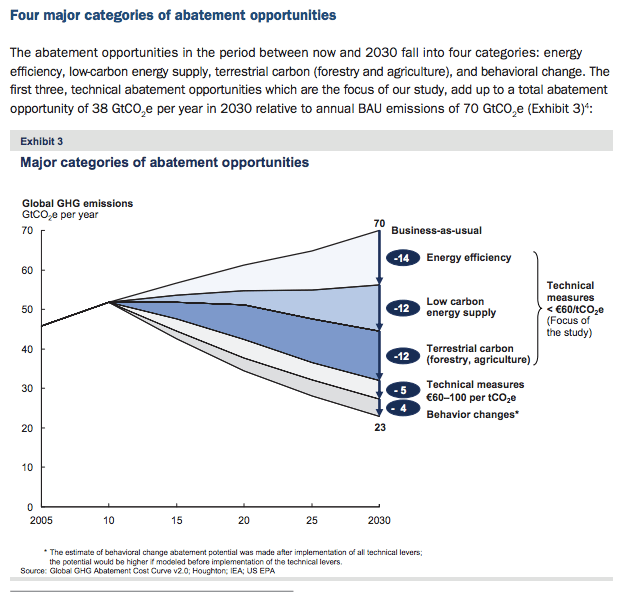 Hess can tout the importance of minimizing coal’s role in the global energy mix and shifting away from coal-fired power plants. Some oil & gas companies are becoming increasingly outspoken against coal, publicly lobbying to shift capacity over to cleaner natural gas (8). If Hess could champion reductions in coal use without lobbying on behalf of natural gas, that would perfectly align with climate change response best practices.

In addition, while adaptation is not as cost-effective as mitigation, it can still play a role: Hess can push for equipping fossil fuel plants with carbon capture and storage.

Hess could readily support initiatives such as improving insulation in buildings, or a transition to LED lightbulbs that can provide a 50% increase in energy efficiency (7). Hess could support the need for more fuel-efficient vehicles—CEO John Hess appears to be sympathetic, saying at a conference back in 2009 that “We need to have the courage to demand 50 miles per gallon fuel economy as the national standard for all vehicles” (9). The company is famous for its annual Hess Toy Truck; the company could drive significant public awareness if, for the first time ever, it merely added a second vehicle– perhaps some sort of hybrid, or a light rail train that symbolized a push to lower traffic congestion in major urban areas. 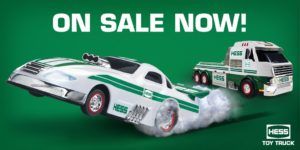 Hess is already implementing many behavioral changes company-wide—efforts like improvements in efficiency and sustainability as well as recycling (1).

Because forests and soils serve as natural sinks for carbon (10), fighting deforestation, supporting reforestation, and sequestering more carbon in soils through changes in agricultural practices are all imperative endeavors that Hess can endorse. Implementation, however, is more difficult given that 90% of the unlockable gains reside in developing countries (7).

In fact, optimal climate change response in general places an outsized burden on developing countries that need dirty, affordable energy the most; Hess could support some kind of charitable initiative that ensures energy remains affordable and accessible in developing nations.

Oil companies will never be at the bleeding edge of effective climate change response; but by acknowledging the limitations of their contributions by virtue of their industry, we can think more deeply about creative ways to encourage their involvement in valuable solutions.

A Hotel Under Water? Hilton Worldwide

In Too Deep? The Future of Flood Insurance in the Face of Climate Change

Student comments on Hess Corporation: Can Oil Companies Be Part of the Solution…Or At Least Less of the Problem?