The recipe for Gatorade was famously developed at the University of Florida by a team of scientists in 1965 after receiving a request from the football coach to help optimize player performance. By 2015, royalties earned from the sales of Gatorade surpassed $1 billion and the University of Florida had collected $281 million in royalties for its ownership stake [2]. In 2004, Stanford made roughly $336 million on the sale of Google stock that it had received in exchange for allowing two Ph.D. students, Sergey Brin and Larry Page, to license the search algorithm patent that the university-owned [3]. These are just two examples of university-developed intellectual property (IP) that have generated and continue to generate huge returns on investment for their universities and have added significant value to the world. Largely due to their ability to attract world-class talent, top-tier universities like Harvard are uniquely positioned to develop and help commercialize innovative technologies that positively impact the lives of people all over the world. As the current process stands though, the vast majority of intellectual property developed at Harvard will never achieve the success of Gatorade or Google. Having said that, the integration of software-based solutions into Harvard’s innovation supply chain could increase the probability of realizing the full value of its intellectual property.

What is Tech Transfer?

The Bayh-Dole Act of 1980 gave universities the right to own and license intellectual property [4]. Since then, many universities have established Technology Transfer Offices (TTOs), referred to as the Office of Technology Development (OTD) at Harvard, to assist laboratory researchers and inventors in bringing their technologies to market by helping to form new companies or by finding existing companies to license. Unsurprisingly, Harvard ranks as one of the “Most Innovative Universities” according to Thomson Reuters 2017 list, behind only Stanford and MIT [5]. However, according to a recent report from the Milken Institute, which ranked the effectiveness of university tech transfer offices, Harvard’s ranked number 27th [6]. Why the huge disparity?

As the process currently stands, when novel technology is developed by a researcher at Harvard, the researcher reports the innovation to Harvard’s Office of Technology Development (OTD), which evaluates the technology’s market potential. If the technology is deemed high potential, the OTD protects the technology by filing for a patent, then markets the intellectual property to potential licensing partners [7]. If a partner is found, a licensing contract is negotiated and, in most cases, any further commercial development is handled by the acquiring company. Due to the volume of technology development, this relatively cumbersome process creates a bottleneck at the OTD. To relate back to traditional supply chains, the university laboratory could be viewed as the manufacturer, the OTD is the distributor, and the existing company or new startup is the consumer. Marketing intellectual property is generally accomplished through existing relationships and word-of-mouth. This “innovation supply chain” is missing a digital retailer that can alleviate the marketing responsibilities and more effectively find licensing partners.

To address this concern in the short term and medium term, Harvard’s OTD currently lists available IP on its website [9]. The way in which it is listed, however, is relatively unorganized and difficult to contextualize. For example, interested companies and entrepreneurs have no way of filtering for important attributes of the technology beyond high-level industries. For starters, it would be helpful to understand the technology’s stage of development, potential applications of the technology, and preferred licensing terms. 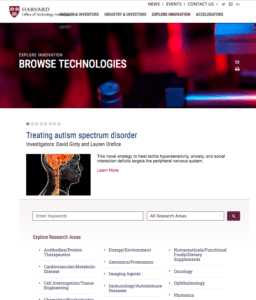 Marketing high potential IP should not rely on serendipitous relationships of university faculty. There should be an easy systematized method for identifying high-potential technologies early on, engaging potential partners and receiving feedback, and ultimately striking a mutually beneficial licensing agreement with an existing company or new startup. Harvard should consider building a software platform that facilitates collaboration between inventors, existing companies, and other universities. The platform should help identify the most popular intellectually property, similar to a Product Hunt, where the most popular tech is up-voted to the top and should include potential applications for the technologies and help to facilitate licensing agreements. 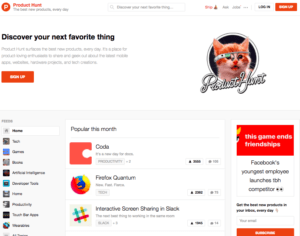 By building this platform, Harvard can increase the number of technologies brought to market and likely maximize its return on investment.

Finding licensees only solves part of the problem. In most cases, startups that acquire intellectual property will need funding to continue its development. Should the university also consider investing companies formed on its new software platform? Are there any risks in collaborating with other universities?

LaCroix-vey! Climate change and the business of (cool) carbonated water