Founded in 1869, Goldman Sachs (“GS”) have grown itself into one of the top two investment banks globally. GS built upon its success by serving mostly institutional clients through its (1) Investment Banking, (2) Institutional Sales and Trading, and (3) Investment and Lending divisions, while also high-net-worth individual clients through its Private Wealth Management division. Never in the company’s 148-year history did GS serve the mass retail customers.

This all changed since April 25, 2016, which marks GS’s attempt to penetrate into the retail banking industry. Through its wholly owned subsidiary GS Bank, the company is now offering online retail banking services to retail customers in the US with a minimum deposit of only $1.

The origins of GS Bank could be traces back to the 2008-2009 financial crisis when GS, which previously operate as an investment bank, had to reclassify itself as a bank holding company to gain access to the government’s “bail-out” money. In the next few years, GS continued to operate as before and did not involve itself in retail banking business, but rather relied on wholesale funding from large institutions, whose money is considered riskier.

Last January, Basel III, a new set of international regulations that came into effect categorized retail deposit as the lowest-risk sources of capital given that mass retail savers are unlikely to withdraw funding en masse. Therefore, for GS to lower its capital risk, the company decided to tap into the retail banking market.

Enabled by the internet technology, financial service industry has transformed itself from the brick-and-mortar model into mobile and internet-based service model. Given the massive capital required for establishing offline retail presence, and the already saturated retail banking industry, GS decided to focus only on online retail banking segment.

The value proposition of GS Bank for customers is very clear. There is no minimum deposit required to open an account, no transaction fees, a 1.05% APY (“annual percentage yield”), and FDIC insurance up to $250,000, the maximum amount allow by law. If the customer prefers to save the money through certificate of deposit, APY would range from 1.20% (12-month) to 1.85% (5-year) depending on the deposit duration.

Other traditional retail banks such as Bank of America and Chase all have significantly lower APY (0.01%-0.03%) with minimum balance required of $2,000 to $2,500. The chart below compares the APY of GS Bank vs. largest US Banks.

However, although GS Bank offers the best-in-class interest rates, there are considerable downsides to its business offering related to the lack of offline retail branches. GS Bank does not offer checking account, no debit card and no ATM access at the moment, hence it could not replace the traditional banks when it comes to everyday spending. Also, customer services are provided entirely through phone or online service centers, and would require some level of tech-savviness for its customers. 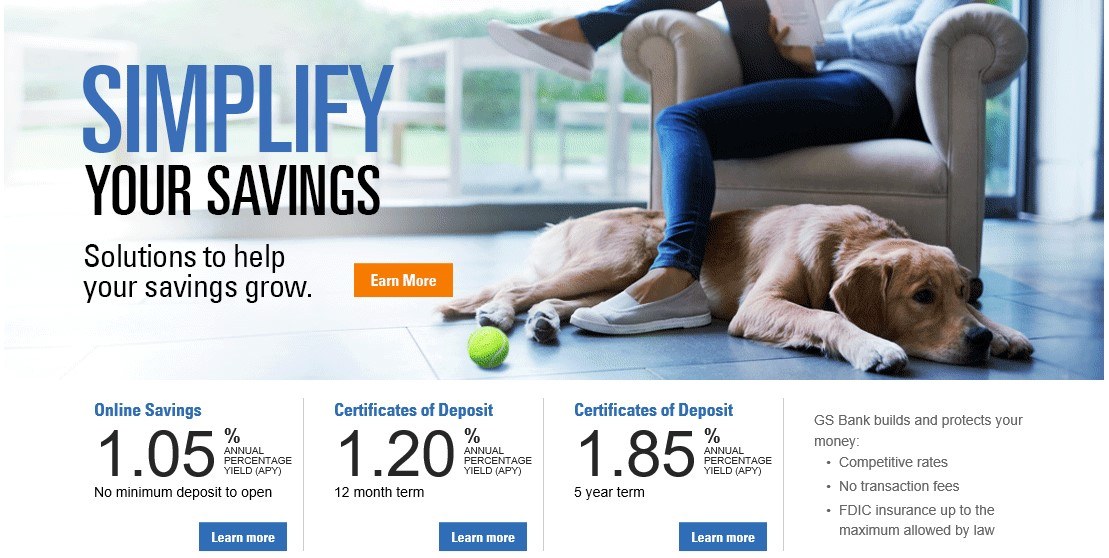 GS Bank’s ability to offer much higher savings rate to its customers is mostly due to its “online-only” operating model. Traditional retail banks require operating a network of bank branches and ATMs, and having many bank tellers and service employees to attract and service customers. Bank of America, the largest bank in the US, has 4,700 bank branches, 16,000 ATMs and over 200,000 employees globally. This requires significantly amount of capital investments and operating expenses. A quick calculation shows how much money can be saved by transforming from traditional offline to online banking model.

Take Bank of America as an example:

Assuming the company’s 2015 salary expense (~$30bn) can be saved by 50% through leaner operation and centralized functioning, and rental expense (~$4bn) can be saved entirely through its online-only strategy. The company would have saved $19bn (or 50% * $30bn + $4bn) in total. The company had $1.1trn in total deposits, and the savings would represent 1.7% of annual interest on the total deposit. And this is how GS Bank manages to offer a higher interest rate.

Since the rollout of GS Bank in April 2016, the company’s retail business has gained huge traction and on October 13, 2016, GS introduced another retail banking service “Marcus”, named after its founder Marcus Goldman, an online-only consumer lending platform that promises no sign-up fee, no late fee, and no prepayment fees ever, with comparatively low interest rate. Meanwhile, the company has been investing heavily on using big-data analytics to better understand the creditworthiness and spending behaviors of its customer base.

As Mark Schwartz, ex-CEO of Goldman Sachs Asia said during the company’s town hall meeting in 2014, “Goldman Sachs has transformed itself into a technology company”. The company is indeed investing significantly into technological innovation, to help the company stay ahead of the competition in the global financial industry.

When Epic Digitization is Not So Epic