A Primer on the Digitalization of the Grocery Store

The year is 1996, and the internet was in its infancy. At the time, just 36 million people worldwide (compared to the 3.6 billion people today) had access to the internet, and internet participation was growing at >100%/year1. For a number of daring business people, the environment of rapid internet adoption meant one thing: disruption to traditional business models.

One of the most salient examples of the zeitgeist was the desire to disrupt brick & mortar businesses. Companies like Pets.com, Books-a-Million, Kozmo.com, and Boo.com, while now long-forgotten, had the backing of millions of dollars (and the valuation of billions of dollars), all with the hope of killing off the retail store and ushering in a new digital retail experience.

It seems fitting that the grocery industry also saw its share of iconoclasts. The internet seemed to represent an end to check-out lines, ripped shopping bags, and squeaky grocery carts. With a click of a button, companies promised to move the grocery experience to the digital age. And with a $1 trillion market (between grocery and convenience shopping) up for grabs, the prize for the winner was too big to ignore2.

The Rise of Webvan

Webvan, founded in 1996 by Louis Borders (founder of Borders bookstore), seemed to be perfectly positioned to digitalize the grocery world. The market agreed, as Webvan took on $396 million in funding, at a valuation of over $4.8 billion3.

Its value proposition seemed intuitive: Instead of walking or driving to the nearest grocery store to pick up groceries, users would instead use Webvan’s web portal from the comfort of their own homes, place their orders online, and pay with their credit cards. Groceries were then delivered in brightly colored plastic boxes to the users’ homes. For a premium, customers were saving time and effort on a major part of their day to day life. The internet heralded a totally new way for customers to make their regular transactions, and Webvan seemed to be a game-changer.

The Decline of Webvan

While there was excitement about Webvan, ultimately the company spent incredible amounts of money while not recouping enough in sales to make the venture profitable.

Because Webvan decided to build out its own infrastructure (including warehouses across the country and a nation-wide fleet of vans), its capital expenditures were enormous.

So despite Webvan’s novel use of technology to revolutionize the shopper experience, Webvan kept one very heavy foot squarely in the non-digitized world of grocery logistics.

In just 4 years, the financial rollercoaster that began with over $300 million in funding ended with Webvan’s declaration of bankruptcy.

So now, 15 years after the demise of Webvan, a new player in the grocery digitalization space has come to take its place. Two key questions immediately arise: 1. What makes Instacart different than Webvan? 2. Will these differences lead to a different outcome?

Instacart, however, has one key difference that gives investors hope that Instacart won’t just be Webvan 2.0. Instacart leverages the “sharing economy” that companies like Uber and Task Rabbit have popularized. Instead of Instacart-owned vans delivering goods from Instacart-owned warehouses, Instacart instead enlists the help of contractors who use their own cars to drive to local grocery stores to shop for the Instacart users.

The outcome is millions of dollars worth of capital expenditure savings for Instacart compared to Webvan.

So far, Instacart has raised $264 million in funding at a $2 billion valuation4.

Ultimately, we still don’t know whether the grocery industry is going to be revolutionized by digitalization. It remains to be seen whether Instacart becomes a mainstay for a large portion of grocery consumers; however, it’s not a stretch to see why consumers and investors are hoping it works.

But we still cannot forget that digitalization alone cannot revolutionize businesses easily: perhaps Instacart has figured out a way to not only improve the shopper experience, but also to cheapen the logistics behind grocery shopping. Or perhaps, like Webvan, Instacart will come across another impasse that its digitalization efforts won’t be able to easily overcome, and we’ll have to wait another 15 years before we find another service that really brings home the bacon. 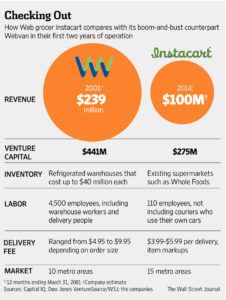 The Verdict is still out – Will Square Survive?