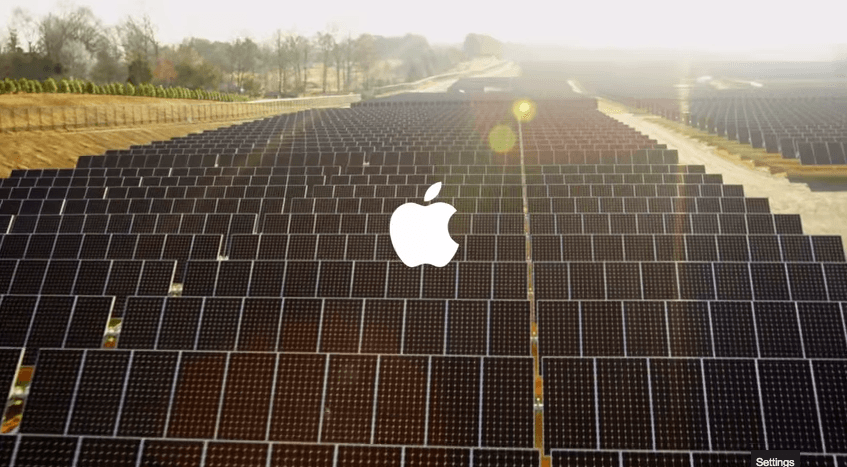 In college, I did a research project on the sustainability of Keurig’s coffee machine, looking specifically at its product design. Today, I wanted to talk about Apple, another electronics manufacturer, but from a more holistic perspective – business operations

Apple’s engagement in sustainability really took off in 2006. “Green my Apple” was the innovative campaign led by Greenpeace that urged Steve Jobs to take action to combat climate change. The campaign was a huge success, and Jobs announced publicly that Apple would phase out of toxic chemicals in its product range by 2008 [1]. In 2010, Apple’s main contract manufacturing facility Foxconn in China became the epicenter of scandal when 18 workers attempted suicide, and additional pressure was placed on Apple to promise more transparency in its supply chains management. [2] Since then, Apple has really stepped up to lead the electronics manufacturers in sustainability and social responsibility.

On top of its public image, Apple has financial incentives to incorporate more responsible practices. Renewable energy could be considered less risky compared to fossil fuels in the future as carbon emissions are being monitored and regulated more tightly with time [3]. Also, natural resources are becoming more expensive, so recycling materials has a huge cost benefit [4].

Business operations made up for 82% of the total emissions, and product & service design, which affects the end consumers, made up for 18%.

To address the carbon emissions during business operations, Apple focused mainly on manufacturing by altering resources and energy.

The first big step Apple took was to phase out all the toxic materials, including Beryllium, Mercury, Lead, Arsenic, PVC and Phthalates, and Brominated Flame Retardants (BFRs) [5]. Apple also replaced the polycarbonate and fiberglass chassis with aluminum in iPhones and MacBooks for aluminum’s recyclability. Apple also transitioned from fossil fuels to hydroelectricity in processing of aluminum to reduce carbon emissions, as well as reengineering its manufacturing process to reincorporate the scrap aluminum. In 2015, Apple was able to reduce the carbon footprint of the latest generation of iPhone 6 to 50% of the impact of the previous generation [5]. This change in materials is well-aligned with Apple’s values as a company– aluminum to create sleek design that is still light enough for its users and recyclability and materials efficiency that resulted in cost savings.

In 2015, 93% of Apple’s energy came from renewable sources. Although an impressive figure, this figure incorporates all of Apple’s less energy-intensive facilities and carbon offset programs. Because I’m mostly concerned with Apple’s manufacturing process, I decided to calculate Foxconn’s reliance on its own solar farm in Zhengzhou, China, where most of Apple’s products are made. In 2015, Apple produced 38.4 million metric tons of carbon emissions total, 77% of which was from manufacturing. Foxconn’s solar farm produces about 400 megawatts of solar, and assuming that 4 gigawatts of solar energy offsets 30 million metric tons of carbon, Foxconn’s solar farm offsets about 3 million metric tons of CO2 [5]. Therefore, in reality, only 10.2% of its manufacturing energy was actually provided by its own renewable source. This is definitely a huge area for improvement for Apple.

But what is really exciting is that Apple helps its supplier facilities in China, Taiwan, and Japan to be more sustainable through energy audits. The audits successfully identified more than 224 million kilowatt-hours of electricity in annual savings opportunities over 13 facilities. From these identified improvements, suppliers have already reduced over 18 million kilowatt-hours of electricity, avoiding 13,800 metric tons of CO2 [5].

What more can they do?

I am mostly concerned about Apple product and service design, specifically its’ re-usability. At the end of the day, electronics are in nature very resource-intensive products, and Apple needs to incorporate more sustainable design principles to reduce the impact of usage. Even though Apple products are known to be durable, its free warranty only lasts for one year. This is both a product and service design problem – just a couple weeks ago, my 2-year-old MacBook broke down. I had the option of sending in my laptop to be fixed for around $800 or buying a new one for $1200. I chose the latter. This is a product design problem because unlike many PCs, MacBooks have to be sent back to its manufacturer in China to be fixed because of how compact the built-in parts are. It’s also a service design problem because the public perception is still that warranty is not worth the money [7]. If Apple truly wants to cut down on their carbon emissions, rethinking how their products are perceived and used throughout its lifecycle will be essential.

Seeking Snow: The Impact of Climate Change on Vail Resorts