In 2005, the U.S. lost half of its coral reefs in the Caribbean in one year due to a massive bleaching event. Comparison of satellite data from the previous 20 years confirmed that thermal stress from the 2005 event was greater than the previous 20 years combined.1  Warmer water temperatures can result in coral bleaching. When water is too warm, corals will expel the algae (zooxanthellae) living in their tissues causing the coral to turn completely white. Recent studies of the Caribbean coral reefs have shown that 80% of its coral reef cover has been killed due to bleaching.1 The Caribbean reefs span from Belize to Mexico, and include Anguilla, Bermuda, St. Lucia and Turks & Caicos. The economic implications of coral bleaching are substantial.2 These country’s economies depend heavily on fishing and aquatic tourism, which have been impacted as a result of coral bleaching. The damage in the Caribbean foreshadowed what is now happening in the Great Barrier Reef. 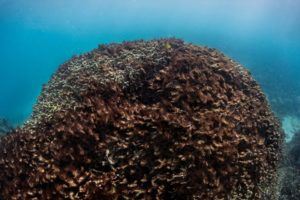 (The above image is dead coral off Lizard Island in the Great Barrier Reef, it was bleached in March and then dead and covered in seaweed in May)

Stretching 2300 kilometres, the Great Barrier Reef is the largest living structure on the planet.3 The reefs are known for its intricate and colorful architecture. It includes 600 types of soft and hard corals, more than 100 species of jellyfish, 3000 varieties of molluscs, 500 species of worms, 1625 types of fish, 133 varieties of sharks and rays, and more than 30 species of whales and dolphins3. Recently coral bleaching has begun to kill off vast portions of the Great Barrier Reef and the surrounding wildlife. Rising global water temperatures are continuing to contribute to the bleaching of coral systems that has occurred in the Caribbean.  A lot is at stake with the continuation of damage to the Great Barrier Reef. It’s the largest living structure in the world, and by far the largest coral reef system may cease to exist in the not so distant future.

About 2 million people visit it each year and together they contribute almost $6 billion to the Australian economy.5 Diving Cairns is an online diving company based in North Queensland, Australia. It specializes in providing comprehensive information covering all aspects of scuba diving, skin diving and snorkeling.6 Diving Cairns is run by specialized divers and are well versed in navigating the Great Barrier Reef area. The livelihood of their business is dependent of the preservation of the Great Barrier Reefs since the reefs are large driver of inbound tourism into the country. The company has also has a banner that calls attention to the health of the Great Barrier Reefs. Marine biologists give updates on coral bleaching and the extent to which is affecting the region. Additionally, Diving Cairns has an update from “Quicksliver Group’s Environmental & Compliance Manager, Dougie Baird, who also discussed the slowing degradation of the reefs.6

No Clear Next Steps and Way Forward

By drawing attention to the issue in website, Diving Cairns is trying to bring awareness to the issue of global warming with potential customers. Individuals play a large role in contributing to global warming and can help reduce carbon emissions by changing our lifestyle. Activities like recycling and using public transportation are individuals actions that when peformed on a large scale can help reduce the impact of global warming. Climate change, pollution, overfishing and degradation all play a role in damaging marine wild life. Individuals can also influence the actions of large corruptions by boycotting products or influcing their polictical representatives to impose regulations. Although coral bleaching has devastating impacts on companies like Diving Cairns, they have minimal control in curbing its impact. What steps do you think should be taken to change this trend or is it too late?