Remember when you had to navigate with a map the size of a sheet of paper or the size of your favorite movie poster and you needed a magnifying glass to read it?  Something like this: 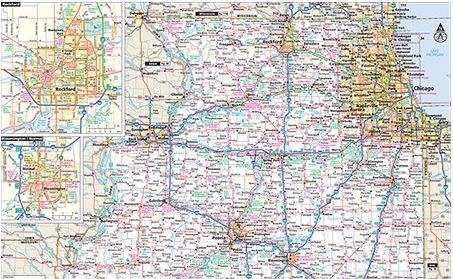 This was the world that Garmin initially competed in as a global positioning system (GPS) navigation company started in 1989. The company focused on providing outstanding mapping and navigation products based on access to a set of US Department of Defense satellites.  From 1989 to 2008 Garmin grew rapidly in this space and peaked with sales around $3.8 billion, dominating the GPS market.[1]  They broke their products into four segments: aviation, outdoor/fitness, automotive, and marine devices.   Garmin has always been a vertically integrated company designing, developing, manufacturing, and marketing this wide range of products both direct to consumers and in commercial markets.[2]

As society and the economy entered the digital age, Garmin continued to maintain an operational edge through new product development.  As technology improved, Garmin led the industry in personal navigation devices and car navigation systems developing a wide range of products both for software in new cars and for the direct consumer to use.  They were one of the first to offer a mobile mapping navigation software in 2005 with Garmin Mobile, available as a paid subscription on BlackBerry devices.[2]  Garmin was also one of the original players in the wearables category with the original introduction of its Forerunner 201 in the early 2000’s.[3]

The industry around GPS technology, navigation, and wearables was becoming increasingly competitive in the 2000’s after the US Department of Defense raised all GPS restrictions for public use.  Garmin faced intense competition from companies like TomTom, Magellan, and others.  However, in 2006 Garmin was still not recognizing tech companies like Apple, Google, and others as competitors in the automotive, personal navigation, and wearables categories.[4]

As the digital transformation continued and intensified from 2005 to 2015, Garmin has benefited from its operational model and vertical integration.  Being the first to market products like those mentioned above.  However, they have fallen short in many ways as well.  They have seen their main revenue producers eroded away by google maps, the iPhone, and free navigation services on smartphones.

Garmin has also suffered in the fitness wearables category.  As devices and people have become more interconnected, Garmin remained focused on the professional athletes with top end devices and left the average consumer to be served by rivals like Fitbit.  Now they are struggling to regain any advantage in this market where the device is no longer the differentiation.  Instead it is the consumer’s data and interconnectedness between a device and their lifestyle.[5]

So why has Garmin, with its outstanding product line, vertically integrated operations process, and head start failed to see growth in the digital age and instead has seen declining or flat revenue?  One lens that may help is looking at the digital transformation as “previously discrete objects, people, and activities are being connected.”[6]

With this context, lets examine the operational process at Garmin in a little more detail.  First they do all their own R&D and product design, spending 15% of net sales in 2015 on R&D. [7]  Overtime, what can be seen is that the company continually iterating on a set product line.  They did not expand their product innovation funnel to include changing aspects of the social context and see how they can meet those needs.

What to do next?

Even today it does not appear that Garmin has learned the lesson of the digital transformation.  That interconnectedness and data are key parts of what their products need to provide.  Garmin needs to revamp its operations model to be more innovative in its product development process.  Working to differentiate themselves in the extremely competitive fitness wearables segment.  But also, finding ways to take the market segments that are still relatively segmented like aviation and marine navigation and integrate their top of the line navigation equipment into a connected world.  If they do not these areas will also be taken over by technology driven companies capitalizing on the interconnected world of devices.  Particularly as the technology in these segments will soon no longer be barriers to entry, Garmin needs to lead this shift rather than allow new competitors to enter the market and capture this value like they allowed in hand-held navigation market.  They are already attempting to do this with apps like Garmin Pilot where aviation navigation is displayed on devices like a pilot’s iPad.[8]  Is this enough to stay ahead and be the leader?

[5] Knapp, A 2016, ‘How Garmin Mapped Out A New Direction With Fitness Wearables’, Forbes.Com,

Student comments on Garmin: Lost in an Interconnected World