The Atlantic cod is in hot water.

Historically, the largest challenge facing commercially fished species has been overfishing: the removal of fish from the habitat at a rate faster than they reproduce, leading to scarcity or near-extinction of such species. The Atlantic cod is a well-known example, with aggressive fishing and the development of high-yield trawlers leading to a crash in fish population in the early 1990s. The establishment of fishing quotas by regional fishery management councils have helped stocks of various species since recover.

Yet this wasn’t happening with cod in the Gulf of Maine. Despite quotas informed by strong science, cod stock kept plummeting [1] [Exhibit 1]. As researchers dug into the data, they found a disturbing connection between water temperature and cod reproduction. Beginning in 2004, the rate of warming had increased seven-fold in the Gulf of Maine, leading to this body of water warming faster than 99.9% of the ocean between 2004-2013. Warmer water is believed to lead to lower survival rates of larvae and juveniles, as well as increased predation, decreased available prey, and increased metabolic costs [2]. The warm-water effect is not limited to cod. Cold-blooded animals are extremely sensitive to changes in ambient temperature, and studies have shown hake, lobster, and sardines all moving north in search of colder waters as oceans warm [3]. 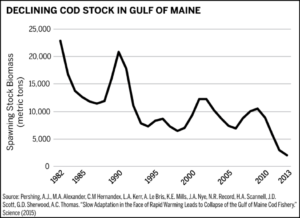 Suddenly, an industry that for four decades believed overfishing was the biggest challenge is facing a new existential threat: climate change. This threat, while also human-caused, is much more unpredictable and difficult to control. Can the US fishing industry adapt and respond to the effects of climate change? Answering this requires a deeper dive into the industry structure.

In the Gulf of Maine, individuals are licensed as fish harvesters and apply for access to commercial fisheries, such as those for groundfish, lobster, tuna, etc. Often fishermen move between multiple fisheries as resource abundance and market demand change. Starting at about three miles offshore, marine fisheries are considered federal waters, and are managed by the New England Fishery Management Council (NEFMC). The NEFMC is one of eight regional Fishery Management Councils (FMCs) established in 1976 specifically to address overfishing and determine quotas [4] [Exhibit 2]. Historically, climate change mitigation has not been in this charter. 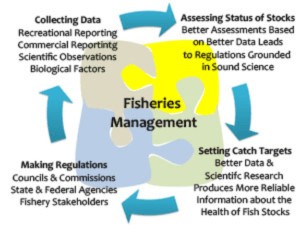 How Can the NEFMC Adapt?

FMCs face the challenge of striking the right balance between economics and the environment. While quotas have improved fish populations, they have also placed severe strains on fishermen’s profitability. As the effects of climate change become increasingly clear, how must FMCs such as the NEFMC adapt their management practices? At least three changes are needed: increased coordination across FMCs, improved data usage, and consideration for impact on fishermen.

FMCs are set up regionally. The NEFMC covers through southern New England, at which point oversight switches to the Mid-Atlantic Council. Climate change blurs these lines. Species historically located in the Mid-Atlantic, such as summer flounder and scup, are being observed in the Gulf of Maine [5]. As these species move north, do they fall under jurisdiction of the NEFMC, or do we extend reach of the Mid-Atlantic FMC? One option includes leveraging the Atlantic States Marine Fisheries Commission (ASFMC), which oversees non-federal waters along the entire east coast. This would require federal-based FMCs to relocate decision-making to inter-state agencies. Unsurprisingly, implementing such change is slow.

Additionally, accounting for climate change in quota decisions will require the NEFMC to use more diverse sources of data and climate forecasts that are inherently uncertain. They also need stronger management-scientist feedback loops to inform the most useful research questions and measure the impact of regulatory changes. As federal budgets are tightened, FMC bandwidth is already at capacity [6]. Investment in FMC capability-building is critical to collect and apply data in valuable and efficient ways.

Lastly, there is the little-discussed question of how to support fishermen whose livelihood is threatened by further reduced quotas and externalities [Exhibit 3]. Unlike the case of overfishing, they have little ability to reverse the cause. FMCs could look to agricultural practices such as farm subsidization, yet these solutions are criticized for interfering with price mechanisms and may make the US uncompetitive in the international fish industry. Alternatively, educating consumers on eco-friendly seafood could help shift tastes towards less endangered species, or increase willingness-to-pay for eco-friendly sourcing. 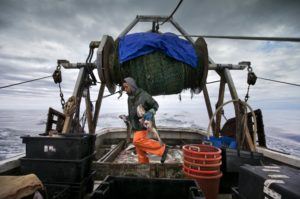 Exhibit 3: Fishermen Are Facing Extinction, Too

One of the biggest lessons learned in the last few years is that the rate of climate-induced ecosystem change has far exceeded our rate of adapting management practices. Federal agencies responsible for regulation are changing, but slowly. In order to accelerate solutions, how can we induce more responsibility in the more agile private sector? What must be addressed through regulation, and what can be addressed through innovation?

Peter Shelley, “Optimum Yield for the Environment and All of Us,” Talking Fish (30 September 2016), accessed 30 October 2016,  http://www.talkingfish.org/newengland-fisheries/optimum-yield-for-the-environment-and-all-of-us.

Student comments on From Overfishing to Overheated: The New Threat to New England Fisheries