The current U.S. administration is contemplating a dramatic isolationist trade policy in the form of a significant “border tax” which would impose steep tariffs on Chinese and Mexican imports – potentially as high as 45% on goods from China and 35% on goods from Mexico.[1][2] Successful implementation of these policies would have a profound impact on the U.S. auto industry, as more than half of U.S. auto sales are supplied by production from Asia and Mexico.[3]

Government officials are also in the midst of renegotiating NAFTA. Continued U.S. isolationism during these negotiations carries the threat of rebuke from long-standing trade partners. Of particular concern to U.S. auto makers, such as Ford and General Motors, is the potential end of an exemption from a 25% duty the U.S. imposes on all pickup trucks produced outside the country.[4] This has significant implications, as “Last year through November, the U.S. imported $18.5 billion worth of vehicles from Mexico that would be subject to the tax.”[4] As a result, the U.S. auto industry faces potential tariffs on both cars that are manufactured abroad and imported domestically and on imported parts used for manufacturing within the U.S. Ford and other auto manufacturers are particularly vulnerable to strains on the supply chain because cars require up to 15,000 individual parts and failure to deliver even one can halt a production line. Furthermore, studies indicate that companies “that experienced even minor [supply chain] disruptions faced significant declines in sales growth, stock returns, and shareholder wealth, and that these effects tended to linger for at least 2 years after the disruption.” [5] 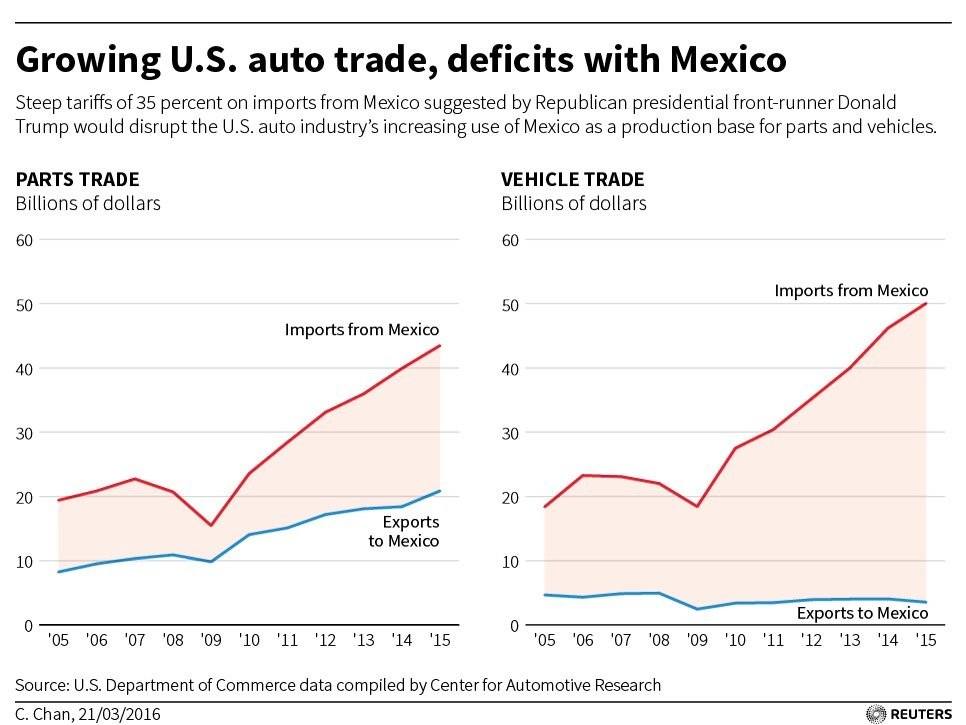 In the short term, Ford’s management has responded to these threats by curbing imminent plans to build manufacturing plants in Mexico. Earlier this year, the company cancelled a $1.6Bn car plant in Mexico and chose to increase production in Michigan instead.[6] To complement its existing geographically diverse manufacturing base, Ford is, in the medium term, continuing a healthy rate of investment in U.S. plants: the company’s investment strategy calls for $9Bn for U.S. plants over the next four years.[7] By investing heavily in domestic plants, Ford partially insulates itself from the potential tax that it would have had to pay on cars produced abroad for the U.S. market. One specific element of its supply chain that Ford would likely look to either manufacture themselves domestically or source from a domestic supplier is diesel engines. The company’s F-Series and other medium-duty pickup trucks represent some of its most profitable vehicle lines, but they are currently built using Mexican-made diesel engines; a 35% tariff would materially affect the company’s cost of production. [8]

Ford’s response to this relatively recent megatrend has been appropriately cautious, likely lessening the negative effects on the company if these tariffs end up becoming legislation. I would recommend not overreacting quite yet, as the U.S. President championing these tariffs has proved relatively ineffective at turning ideas into law. Others question the President’s conviction on such matters: “it is also possible that Mr. Trump will not follow through such policies to their conclusion. His strategy may simply be to bounce individual businesses into making eye-catching investment decisions that will win the White House a news cycle.”[9] In the scenario in which these tariffs are implemented, there is risk of stoking a protectionist backlash against America [10], meaning potential tariffs when automobiles are imported into foreign countries from the U.S. For this reason, I would also recommend continuing to invest in manufacturing abroad so that Ford cars imported into foreign countries would not be subject to such a tax. This way, Ford’s domestic business would be harmed the most, but it would still be on a level playing field with other U.S. auto manufacturers, and the increased cost of production might be passed onto consumers. Eliminating risk of import tax on the foreign part of Ford’s business is strategically beneficial given “95 percent of consumers, 80 percent of purchasing power and the fastest-growing markets for our products are outside the United States.” [11]

Looking to the future, the biggest open question related to this isolationist trend in America is whether or not it will continue beyond the current administration. How strongly should companies react to recent trends which may eventually be reversed?

Strengthening a Supply Chain to Save Lives: UNICEF, Malnutrition, and Global Warming