How Climate Change is Effecting Beer

Beer is composed of four main ingredients: water, grain, hops and yeast. Due global climate change, breweries are facing issues concerning these core ingredients. Water is crucial since it is a primary ingredient and used to grow the remaining ingredients. An increase in drought conditions in locations like California have caused breweries to rely on ground water to produce their beer. The higher mineral content in ground water has brewers saying it is like “brewing with Alka-Seltzer” and thus effecting the overall taste1.

73% of US hops is made in Washington, primarily in the Yakama Valley1. In 2015, temperatures in the region were 4.5oF higher than average, resulting in no snowpack formation. Farmers met targeted yields through use of groundwater, irrigation, and additional water conservation technology2. However, growing concerns that these higher temperatures will be the “new normal” will require larger investments in sustainable technology, especially considering these current hops have been developed to primarily grow in the regions “normal” weather patterns. This pattern is even scarier for breweries as the price of hops has already increased by 250% over the last decade due to smaller yields1.

The current process of growing grain requires heavy amounts of water. Grain is generally a non-perennial crop, meaning farmers must plow the soil and replant every year. These types of plants require more watering since their roots do not go deep enough to obtain water deep in the soil. The plowing of the soil also releases additional carbon into the atmosphere. Farmers are beginning to experiment with perennial based grains, such as kernza, but overall production of these grains is still low and primarily experimental3. 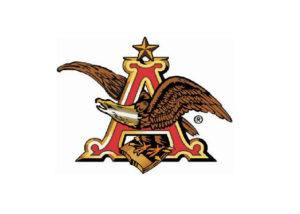 Anheuser Busch has responded positively in the face of climate change to improve its overall production process and relationship with suppliers and distributors. They have created the Seed Research Facility and Smart Barley Program to create more efficient seeds (using 40% less water) and water management systems to deter the challenges caused by the current lack of snowpacks4,5. They have installed weather monitoring systems in Idaho and Montana to help their suppliers use 9-23% less water. Their overall water improvement projects since 2012 have allowed them to improve from a 4.0:1 water used:beer produced ratio, to 3.16:1 as of June 20165.

They have partnered with local organizations such as the Nature Conservancy in Colorado to clean and improve filtration of lakes and rivers, as well as implement systems to reduce forest fires, thus eliminating emissions6. The company currently recycles 99.8% of the solid waste created during the brewing and packaging processes. They have also cut down in the use of overall materials in their packaging, resulting in a reduction of 75,000 tons of raw materials since 20097. They convert nutrients from their wastewater to meet 8% of their fuel needs, making them the world’s largest operator of Bio-Energy Recovery Systems8. They have installed wind and solar power into three of their US breweries. These locations can fully run using these technologies and even sell additional power to third parties. The company is also the industry leader in sustainable logistics. They use a planning system to service retailers with the fewest travel miles possible. They recently converted their Houston and St. Louis distribution network into natural gas tractors, reducing CO2 emissions by more than 2,500 tons per year8,9.  They have also supplied their retailers with eco-friendly coolers that use LED lights and an environmentally friendly refrigerant5. 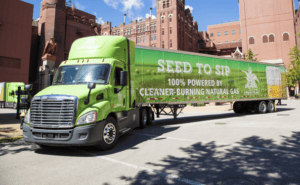 Overall, Anheuser Busch has created a good foundation for working with their suppliers and distributors to make their overall process more efficient, cost friendly, and sustainable. It will be key for them to continue to invest in research and technology. They currently have a barley seed research group, but they should invest additional capital in research for hops production and water efficiency systems. They should experiment with different types of hops and barley in their recipes without sacrificing taste. Creating a network of suppliers in different locations with different species of barley and hops would give them insurance in case a single area is hit with weather conditions like Washington in 2015. The company should also decide on whether to share best practices with additional brewers. Although their improvements are giving them a competitive advantage, a set of breweries has already set the precedent and made a declaration to promote sustainability that Anheuser Busch has not signed10. Given the fact they are an industry leader in a lot of sustainability metrics and programs, it would be beneficial to the health and environmental sustainability of the industry to lend a helping hand when possible.

Hershey’s and the Extra Bitter Future of Chocolate