In 2015, ten of the world’s largest energy companies signed a joint declaration in the COP 21 Paris Climate Summit to express their commitment to help keep global warming below two degrees Celsius above pre-industrial levels. Some of the efforts to which these companies committed to were:

Among the companies that attended and ultimately signed the joint declaration was Total, a French integrated oil and gas company, with operations around the world. Approximately 53% of the company’s $165B in 2015 revenues came from upstream, refining, and chemical operations, with the remaining balance coming from the downstream sector. While the company does not disclose what percentage of its downstream revenues are derived from renewable sources, it made a public commitment in 2015 of investing at least $500M in capital expenditures per year going forward with the goal of increasing its renewables portfolio, primarily in the solar and biofuel segments. This signaled the market that the company is serious about becoming a more diversified energy company. Among the investments that the company made in 2015 is the construction of a 579MWac photovoltaic solar plant in the United States, which now supplies electricity to ~255K homes in California [2].

In 2016 the company took its commitment a step further by acquiring the French battery maker Saft Groupe SA for $1.1B. This acquisition is expected to ultimately accelerate Total’s presence in the renewables market, as companies from around the world race to find ways to store energy generated by solar and wind farms and integrate it into the existing power grids [3]. While this investment is still significantly lower compared to the company’s $119B market cap, it will allow Total to better invest its capital expenditures committed towards renewable energy sources going forward.

It should be noted that there is some skepticism as to whether Total is looking to diversify its asset base purely on philanthropic merit- to reduce carbon emissions. The oil and gas industry has continued to experience volatile pricing since mid-2014, which has led to decreases in revenues for many companies in the sector. This has caused companies to actively look for ways to diversify and stabilize cash flows. Simply look at the Saudi government, which in 2015 announced its intent to IPO ~5% of Saudi Aramco, with the goal of using part of the proceeds to help diversify the government’s sources of revenues. As part of the plan, the government is also looking to partially investing in renewables, with the hope of reducing its dependence on revenue streams from the oil and gas sector, which as of 2014 stood at ~90% (Exhibit 1) [4]. Oil and gas companies are also incentivized by changes in regulations. With some countries committed to reducing carbon emissions at home, these companies have had to find ways to remain competitive in the energy industry. 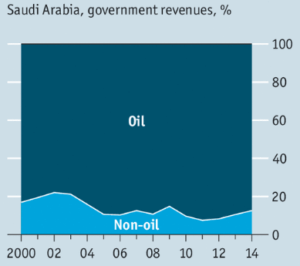 Regardless its intent, Total has been able to stay ahead of the game relative to other companies in its sector. The integrated aspect of the business has served as a partial hedge for the company during the commodity downturn, allowing the company to make use of its cash to invest and diversify its asset base. One could argue that the company should have taken the initiative years ago to at least invest more in clean energy (i.e. natural gas) in order to reduce its carbon footprint, given that Total’s gas reserves have stayed at around 53% of total proved reserves for the past five years [2].  However, the fact that Brent crude prices rose steadily from 2009 to 2011 and then stayed above $100/bbl through mid-2014 could have encouraged the company to maintain its asset base and ignore other alternatives.

As we retrospectively analyze the company’s decisions, we can see how failing to address changes in a competitive environment can ultimately lead to potential threats and company-specific weaknesses. Total could have addressed the changes in regulation and the increased innovation in renewables at an earlier time. This would have allowed them to develop the knowledge and expertise in-house, giving them a stronger competitive advantage in the industry. However, the steps that Total has taken to invest its resources in renewables at a time when its competitors continue to struggle with the volatility in the market can serve as an indication that the company is headed in the right direction.

Apple Reacts to and Leads in Climate Challenge

Mud Skiing: Vail’s Race to save its Winter Sports Business

Student comments on Disruption in the Oil & Gas Industry