Apple Reacts to and Leads in Climate Challenge

Apple has been a responsible technology giant in implementing socially and environmentally responsible business practices throughout its operation- from the deployment of clean energy to encourage efficient use of water, from maintaining high environmental standards for Apple itself to encouraging or enforcing environmental standards to its suppliers. It has truly been a leader in private sector which takes action in solving climate change challenges. It sets well as an example to the rest of the companies on the Fortune 500 list.

In the 50-page Apple Environmental Responsibility Report[1], we not only see key words such as “social responsibility” but also begin to sense how Apple is spearheading the fight for climate change and grasp this global challenge as an opportunity to improve its energy use, product design (Exhibit 1), supply chain management, travel (Exhibit 2) and use of natural resources including water (Exhibit 3), paper and so forth. The strategy towards sustainability not only mirrors the brand image in the eyes of consumers but also sheds a light for Apple to become a next-generation Tech Giant with operational excellence and innovation mindset in long-term. 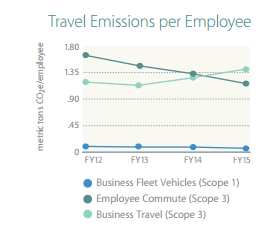 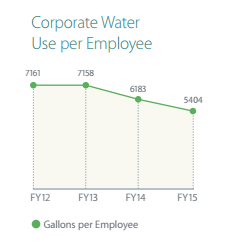 2015 marked one of the most significant years for climate change practitioners, as the world was watching the unveil of the United Nations Climate Summit in Paris. This was also the year that Apple showed its commitment and leadership in combating its carbon footprint- the deployment of solar in the U.S. operation, and later in China. But these were not the only actions Apple took regarding reducing carbon emissions. Under the leadership of Lisa Jackson, VP of Environmental Initiative and former Administrator of EPA, Apple approaches climate change in a systematic way:

By 2015, 93% of Apple’s facilities run on renewable energy[2] (Exhibit 4). In October 2015, Apple completed the construction on 40 megawatts of solar in West China which is enough to power 100% power use of Apple China’s operation. It made it possible for Apple to claim itself carbon neutral in one of its largest markets as well as the manufacturing sites in China. In addition, Apple also works with Foxconn, Apple’s largest manufacturing partner, to join its efforts and Foxconn committed 400 megawatts of solar by 2020 in the production of iPhones. 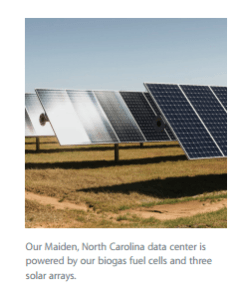 In fact, even before China, Apple announced it would dedicate $848 million to California campus and retail stores, and another $2 billion to data centers in Arizona in early 2015[3].  On the one hand, these seem to be social responsibility; on the other hand, these investments help Apple manage operational risks of fluctuating power costs.

Through approximately $3 billion investment into renewable, Apple is emerging as a new player in the energy sector. In August 2016, Apple received regulatory permission to sell its excess energy to the market[4].  Although the regulation is approved on the condition that Apple’s energy supply to the market is small enough to not influence the market price, the approval may well enlighten Apple a new way of thinking about its future business and the future of its newly formed subsidiary, Apple Energy LLC [5][6].

Despite Apple has made much progress, it can do better. Apple has made its commitment in clean source of energy, and then the next natural step should be focusing its attention on how to use energy more efficiently, for example, installing LED light bulbs in 475 retail stores and corporate campus of Apple, and have Apple buildings LEED certified.

With the magnitude of capital investment into clean energy by Apple, the debate over who should be responsible for tackling climate change, how countries should adapt or mitigate the climate change, and what the role of private sector should be, becomes insignificant, as Tim Cooke, Apple’s CEO, said in an Apple Press Release, [7]” Climate change is one of the great challenges of our time, and the time for action is now.”

[4] Solar Power From Apple Could Light Up Your Home http://fortune.com/2016/08/04/apple-approval-solar-electricity/

Travelers Insurance: If storms are getting worse, who pays first?

Disruption in the Oil & Gas Industry

Student comments on Apple Reacts to and Leads in Climate Challenge