There’s arguably no more important industry to humanity than agriculture: it feeds us, employs one-third of the global workforce [1], and contributes 3 trillion dollars to global GDP [2]. Given the prominence, significant effort and money are invested in accurately predicting seasonal crop output. In the United States, traders, insurers, lenders, and many others utilize crop forecasts to support the agricultural financial ecosystem. Until recently, these players relied almost entirely on monthly production reports issued by the US Department of Agriculture (USDA) to glean information about future supply and demand. The USDA compiled this data by surveying samples of farmers around the country and using statistical techniques to extrapolate domestic-level estimates [3]. While these estimates were decent (usually less than 5% error) [4], unexpected weather events or other anomalies between monthly reports reduce accuracy and provide inaccurate signals to the market.

Descartes Labs processes satellite imagery of US farmland (3.1 million square miles) [5] using neural networks and cloud computing horsepower to provide free crop yield forecasts on a weekly basis. This methodology has proven to be more accurate than the USDA survey and provides real-time price signals that improve overall market efficiency. In fact, the Descartes Lab forecast is so accurate (1% error relative to actual production) it is effectively measuring the weight of every corn kernel in America to an error of plus or minus 3 milligrams [4]. Descartes’ first harvest was in 2015 when it offered free state-by-state and country-wide corn yield forecasts on a weekly basis. In 2016, it expanded the forecast to include soy production and offered a further county-by-county breakdown of yield [5].

While Descartes can promise customers accuracy, its business model seems unlikely to be profitable at first glance; releasing a free weekly report has little top-line value. However, this free morsel is only to entice customers to pay for additional premium services. Currently, paying subscribers can have access to crop forecasts updated every two days enabling speculators to take positions based on data not yet publicly available. More notably, Descartes offers customizable forecast solutions that allow paying customers to apply proprietary machine-learning algorithms and staff expertise to their own big data questions (see below for detail) [6]. 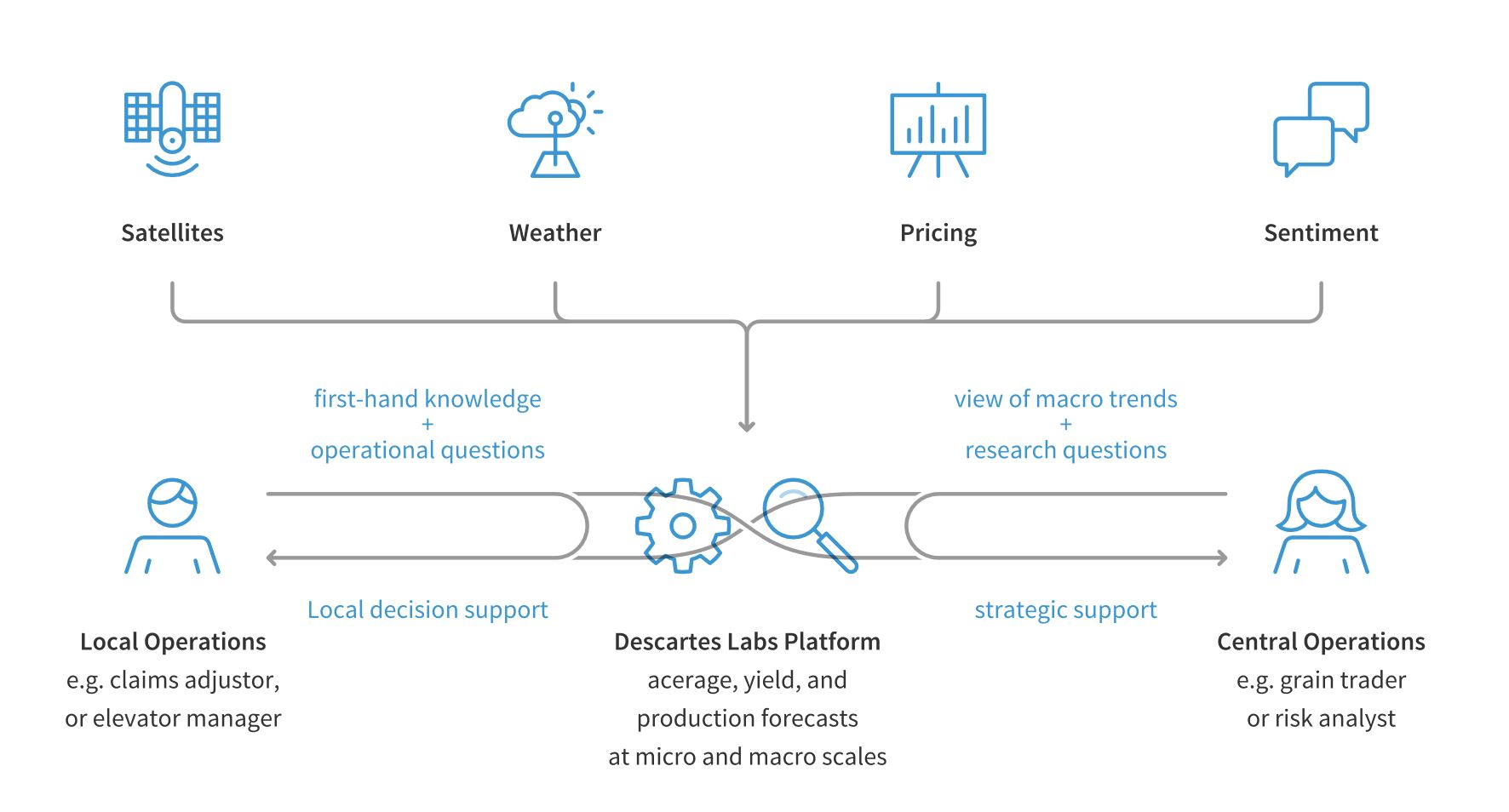 Descartes utilizes these technologies in concert to produce superior agricultural forecasts. They have also developed a standardized forecast development process (shown below) with the potential to be applied broadly to other commercial applications.

If this technology can be used to monitor changes in crop yields, what is preventing it from being retooled to assess construction activity in China or human migration patterns out of Syria? The white space for earth-observation AI applications is massive and as costs for satellite images and cloud computing space fall, this operational model is extremely scalable given the low marginal cost of new forecasting applications.

The Future of Earth Observation

Despite the seemingly boundless potential for this technology, Descartes will face several key challenges in the future. First, the frequently refreshed satellite imagery that their models rely on are controlled by only a few companies like DigitalGlobe and Planet [10]. What is stopping them from using their monopoly power to squeeze Descartes’ margins? Furthermore, what is preventing these companies or another capable start-up from simply replicating what Descartes has done? To get ahead of these challenges, I recommend that Descartes consider the following recommendations to expand capabilities and protect market position:

Just as Rene Descartes redefined the way we look at and think about the world, Descartes Labs is using digital technology to revolutionize the global marketplace for goods and ideas. In a world with more transparency and efficient markets, we’re all better off.

Omada Health: A Leader in the Digital Health Revolution