Cotton, the most widely used natural fibre, is highly susceptible to climate change. Each year, some 22 million tons of raw cotton are produced but according to even the slowest climate warming models, the US production could go down by 30 to 46 percent by 2100 [1]. For footwear and apparel manufacturers such as Nike, who rely heavily on fibres in their production, climate change could cause major supply chain disruptions in the future.

Cotton production in the face of climate change

Rising temperature has a dual effect on cotton production. Higher temperatures can increase cotton yields in cooler areas by extending the growing season, but many areas will become too hot to grow cotton. Although cotton can survive in higher temperatures, sufficient water levels become crucial as plants need water to maintain their temperature within an optimal range. As a result, an estimated 73 percent of all cotton worldwide is currently grown with partial or full irrigation. With increasing freshwater demand and competition for water availability in many countries, droughts become an important factor limiting cotton production [1]. According to a report by the House Committee on Natural Resources, the drought of 2011 in Texas resulted in an estimated financial loss of roughly $2.2 billion [2]. However, cotton is also susceptible to damage from floods and unexpected heavy rain because drenched roots cannot provide sufficient amounts of nutrients and oxygen from the soil.

Furthermore, as temperature rises, insects and diseases are likely to pose additional threats. Firstly, plants have a harder time adapting to temperature changes than animals. Secondly, higher temperatures could so lead to prolonged periods during which insects are active and speed up reproduction rates, both factors leading to further deceasing cotton production. [1]

In response to the broad range of climate change issues, Nike has done a lot of work to understand its supply chain to eliminate waste and reduce its carbon footprint, which has led to its decreased dependency on cotton.

Firstly, Nike has done a lot of work to make its manufacturing technologies and product design more efficient. Nike’s Flyknit technology leads to waste reduction of 60% in comparison to traditional cut-and-sew methods [3]. According the Nike, the technology has eliminated nearly 3.5 million pounds of waste since 2012 [4]. 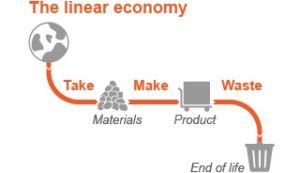 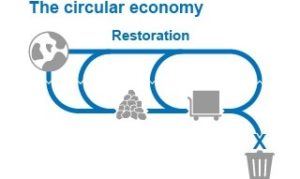 Secondly, in an effort to move from linear to circular economy, where materials are reused or upgraded for other productive applications through as many cycles as possible [5], Nike improved its waste management and recycling. Nike a introduced the Nike grind – a palette of premium recycled materials – used in 71% of Nike footwear and apparel products. Moreover, Nike uses polyester for some of its premium products recycled from billions of plastic bottles. [4]

According to Nike, “in FY15 alone, 54 million pounds of factory scrap was transformed into premium materials used in Nike performance footwear and apparel.  In footwear manufacturing, we diverted 92% of total waste from landfill and incineration without energy recovery.” [4]

Although Nike is a leading example of a for-profit company acknowledging its impact on the environment and making huge leaps towards zero carbon footprint, there are ways to go further.

In the medium run, Nike should double down on recycling waste into fibres used for footwear and apparel production. Not just their own waste, but also waste from agricultural production. New emerging technologies can now be used for upcycling, i.e. turning crop residue into new fibre.

One of the alternative materials used by Nike is semi-synthetic fibre called rayon. Today, rayon is made primarily of chemically treated wood pulp. As such, although seemingly more sustainable, rayon production still puts a lot of pressure on the environment [6] and thus is not in line with Nike zero carbon footprint and is more threatened by climate change.

In today’s ever-changing environment, Nike needs to continuously look for new sources of reducing its footprint and dependency on fresh raw materials. Tyton Bio, a U.S. based company, can serve as an example of a new partnership that Nike could pursue. Tyton Bio uses a hydrothermal process to turn old cotton or waste such as sugar can bagasse or wheat straw into rayon, with a better than 90% reduction in chemistry [7].

As climate change continues to put pressure on the environment and the society, a few questions arise: Is it enough for companies to react to climate change only to the extent to which it directly impacts their value chain? Should it be a company responsibility to reduce its carbon footprint? Can it be made mandatory in the near future for most or all businesses?

Not in your Size? Not a Problem

Student comments on Cotton in footwear and apparel manufacturing