The energy sector has always taken the criticism and regulatory injunctions for processing fossil fuels that allow corporations and communities to function, but should they take the heat alone? Manufacturing industries account for roughly 30% of the world’s carbons emissions and the EPA estimates that the industry and transportation sectors account for 48% the greenhouse gas (GHG) emissions in the US [1][2]. The Coca-Cola Company recognizes the impact their operations have on climate change and as a result have committed to specific and measurable emissions reduction goals throughout their value chain [3]. 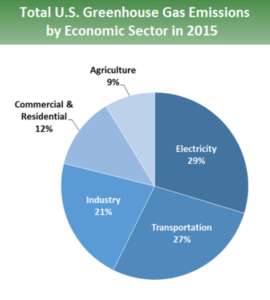 Coca-Cola’s ambition is to reduce the enterprise’s carbon footprint of the “drink in your hand” by 25% by 2020 [4]. Coca-Cola’s sustainability goal spans the value chain from the manufacturer, to the supplier, to the bottler, to the distributor, to the retailer, and the consumer. The economic benefit to improve energy efficiency in manufacturing processes coupled with pressures from shareholders and the growing socially responsible consumer base are catalyzing companies to be pro-active instead of reactive towards potential climate change policy and carbon caps expansion into industry [3].

Coca-Cola along with a host of other companies have adopted the Greenhouse Gas Protocol’s Accounting and Reporting Standard to calculate their emissions inventory throughout the value chain [5]. There are two emission types—direct and indirect—that get categorized into three tiers—scope 1, scope 2 and scope 3—within this industry accepted protocol to delineate what emission sources are within a company’s span of control and how the GHG emissions are produced [6]. Figure 1 illustrates the potential elements within Coca-Cola’s value chain and how the direct vs. indirect channels are scoped according to Greenhouse Gas Protocol.

Figure 1. Overview of GHG Protocol scopes and emissions across the value chain 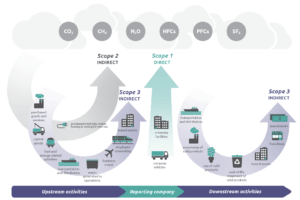 For Coca-Cola’s complex global business systems, some of the value chain entities cross over into multiple categories and Coca-Cola details what emissions type each item in the value chain is classified as [5, Table 1].  Coca-Cola uses licensed bottlers and independent bottlers to reach the consumer, which adds a layer of complexity for the enterprise when trying to categorize and control those downstream activities within their value chain. Therefore, Coca-Cola must account for direct fossil fuel consumption for the company owned-fleet as well as for the bottler-owned fleet that account for Coca-Cola’s indirect emissions from fossil fuel consumption.

Although the lines of direct corporate accountability on GHG emissions for Coca-Cola are a little blurred, Coca-Cola has reigned in on three critical elements within their value chain that would have the greatest impact in reducing their carbon footprint—manufacturing plants, the distribution fleet and cold drink equipment [9]. In the company’s 2016 Annual Sustainability Report4, Coca-Cola estimates what percentage of their overall GHG emissions are attributed to the various elements of the value chain.

Refrigeration contributes the largest amount of GHG emissions for Coca-Cola through hydrofluorocarbon (HFCs) refrigerants. Over the past decade, Coca-Cola has developed cooling equipment that is 40% more efficient and has “eliminated 75% of direct GHG emissions by transitioning to HFC-free insulation foam for new equipment” [10]. Coca-Cola has also made strides towards fleet enhancements through the use of alternative fuels, electric vehicles, and industry and government partnerships to support other socially responsible businesses while also minimizing the carbon emissions of their fleet [11][12]. Over the years, Coca-Cola has also been upgrading their manufacturing facilities in over 25 countries to source power from renewable energy sources.  At end of 2016, Coca-Cola had 81 operational renewable energy projects and are actively pursuing 50 additional projects [13].

Growth through acquisition, entrance into emerging markets, and product evolutions to appeal to a broader range of consumers may appear to have a negative effect on Coca-Cola’s carbon footprint as their manufacturing GHG emissions saw an increase in 2010-2015 due to increase in sales.  However, they’ve remained focused on “growing the business, and not the carbon,” which is evidenced by the decline in the emissions ratio to liter of product produced shown the graphic below[13].

There is potential for governments and regulatory entities do begin to hold big business accountable for their environmental impact on climate change either through an economic penalty for non-compliance or tax benefit. If that thought materializes, then Coca-Cola will need to make sure their value chain is fully bought into to the idea of The Coca-Cola Company owning both the negative and positive implications of the regulations or risk potential legal ramifications with their bottling partners.

As Coca-Cola continues to be analytical and innovative in their carbon reduction strategy, how confident are you about big business’ ability to influence and impact global climate change solutions and regulations?