As stated by Xavier Mufraggi, President and CEO, “Club Med’s all-inclusive getaways give you the freedom and peace-of-mind to share unforgettable experiences with those you love”. (Exhibit 1) So imagine what would happen if a hurricane, a storm or a tsunami happened…

Indeed, climate change consequences can jeopardize the company’s operating model in different ways. First, climate change will provoke greater weather volatility and increased frequency of extreme weather events that could threaten infrastructure and customers’ safety (Exhibit 2). In addition to that, air travel costs will increase (e.g., carbon tax, increased price for fuel), leading altogether to decreased attractivity of touristic destinations. In the long run, the company may also be criticized because climate change will have negatively impacted water and food resources, reduced biodiversity and changed the landscape. 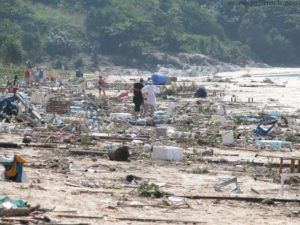 In order to face such challenges, “Club Med” could implement two series of solutions – curative and preventive. Curative solutions could include the construction of resorts higher above sea level, storing food for emergencies, implementing disaster training or a “four-seasons” approach for mountain-based locations.

Interestingly enough, “Club Med” seems to currently prioritize preventive solutions. Not only has the company taken a series of symbolic actions to show its commitment to the fight against climate change[1], but the management team has also launched a global strategy to fight global warming. Indeed, according to Agnès Weil[2], Chief Sustainability Officer at Club Med in 2013, the strategy has three core components:

Beyond those principles – that a lot of companies are legally obliged to follow – “Club Med” also designed a more granular strategy aiming at reducing its environmental footprint[3] (Exhibit 3). Such strategy is designed across three pillars: 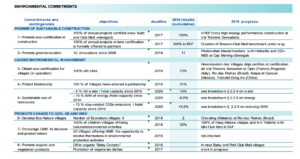 So far, the success of Club Med’s strategy seems to be relative. One the one hand, successes have been achieved. For instance, the Green Globe certification process launched in 2010 was continued in 2015 and to led to 73% of all villages being eco-certified (Exhibit 4). 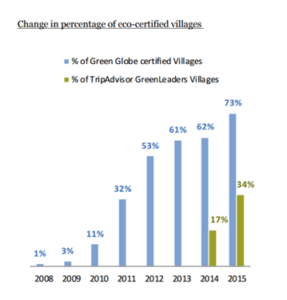 On the other hand, carbon intensity linked to the energy use of buildings is still relatively high. Indeed, at constant scope, over the 2010-2015 period, the change in intensity is ~ 5% per THD, especially due to the increase in consumption of fossil fuels in Asia. In addition to that, the proportion of renewable energy is only 14% of the total of electricity consumed.

Compared to one of its peers – Accor, environment efforts are aligned. Indeed, Accor has identified “commitments for 2020” in its “Planet21” strategy[4]: 100% of renovated or new hotels to be low-carbon buildings, -5% of energy consumption per room and of water consumption per night by 2018 and – 65% of waste.

Going forward, I think that “Club Med” should radically change its high-end positioning to transition to ecotourism[5]. I think that the strategy that has already been implemented in the company enables “Club Med” to obtain the ecotourism certification in a lot of countries.

Having authentic ecotourism would not be too far from the original value proposition of Club Med’s “Villages” and we could easily imagine “Club Med” create its high-end version of other recent examples: “Porino Ecotourism Ltd” – a safari company working with local Masai communities, which only uses renewable energy or even “Rainforest Expeditions” – a Peruvian Ecotourism company which started offering “sustainable experiences” in “Amazonas Villas”.

[1] Support in the adoption of a new international climate agreement formed under COP21, Signing member of the “Paris Pledge for Climate”, Participation to the Carbon Disclosure Project (CDP) questionnaire since 2006 and increased rating from 70 C (2013) to 98 B (2015)

A World without Hershey Kisses?

Student comments on “Club Med”: from (non)economical tourism to eco(logical)-tourism