Espresso. Macchiato. Frappuccino®. To many of us, these words elicit a great degree of joy. Now imagine a world where the daily grind is absent its greatest perk: your morning Starbucks. Sound unfathomable? Unfortunately, climate studies show that coffee as we know it may soon be a luxury of the past.

The grimmest reports state that Coffea arabica and Coffea robusta, the only two commercially relevant species of coffee, could be extinct by 2080 [1], [2]. However, what is far more likely is a constricted supply chain of quality beans. As demand continues to outpace production, prices will skyrocket and quality will plummet [3], [4]. Let’s dive deeper into the causes of this trend, and then touch on what Starbucks is doing about it.

To start our analysis, it’s important to understand where coffee grows. The Coffee Bean Belt is a strip of land from the Tropics of Cancer and Capricorn. Within this belt, Arabica grows best in tropical highlands with a temperature range of 18-21°C. Conversely, Robusta thrives in lowlands with higher temperatures. Arabica is the premium variety and currently accounts for 60% of global production [5]. As temperatures rise, farmers must seek higher ground and lower temperatures, thereby increasing costs. If no higher ground exists, then the only option is switching from Arabica to Robusta, which is a lower grade product largely reserved for instant and discount coffees [6]. Either way, both farmers and consumers are negatively impacted by increasing temperatures.

In many cases, loss of terrain is a smaller concern to an increasing prevalence of pests and diseases. The coffee berry borer is an insect that grazes primarily on coffee fruit. Rising temperatures have expanded the domain of this pest to areas where it previously could not survive [7]. Likewise, coffee rust is of much greater concern to farmers today than in years previous. Coffee rust is a fungal disease that devastated the Sri Lankan coffee industry in the 19th century [8]. Since coffee trees take three years to mature, farmers rarely have the capital resources to replant their crop once the disease takes root. Coffee rust is now a concern in most of the Bean Belt.

Fortunately for consumers, Starbucks has taken note of these trends and is well on the way to finding solutions. In 2013, Starbucks bought its first coffee farm: Hacienda Alsacia in Costa Rica. The intent is to develop tasty Arabica beans that are resistant to coffee rust and pests [9]. Unlike other major commodity crops like corn and soybeans, coffee is grown by small farmers that do not have the resources to pay for optimized growing systems, R&D, and the latest seed technology [10]. Coffee is also cursed with an usually shallow gene pool since Arabica trees self-pollinate [11]. As new seeds are developed at Alsacia, Starbucks is distributing them for free throughout the supply chain [12].

Another initiative that precedes Alsacia is Starbucks’s commitment to making coffee the first sustainable agricultural product [13]. Through a variety of initiatives, the company has donated over $100 million to coffee communities across the globe to improve growing practices and help farmers impacted by climate change to recover their livelihoods. They recently partnered with Texas A&M University-based World Coffee Research to aid farmers in Central America recovering from a leaf rust outbreak that decimated crops [14].

Despite strong efforts from Starbucks, more can be done to combat climate change in the medium and long term. For example, some farmers are turning away from shade grown coffee despite its universal reputation as the superior product. Shade grown coffee tastes better, requires little fertilizer, and less pesticides [15]. The tradeoff is yield: it is impossible to plant and harvest as many crops as you could in an open field. Unfortunately, as temperatures increase across the Bean Belt, many farmers desperate for profits have turned to deforestation to increase yields in the short term. They are able to turn a quick profit on the lumber and then grow more crops [16]. This shortsighted strategy is going to have cascading effects on coffee quality and in turn the livelihood of these farmers.

Climate change will also impact the role of pollinators such as bees in coffee production. Pollinators are currently responsible for 20-25% of coffee production through increased fruit size and uniformity. As ecosystems are impacted or destroyed by climate change, projections show that habitats of pollinators will overlap less and less with the remaining coffee farms [17]. Taking actions with local governments to protect forests and improving shade grown coffee practices will help to mitigate the impacts of this threat.

At the current rate, coffee production will need to triple by 2050 to meet increased demand, doubling the current area of production [18]. As yields continue to decrease, how can Starbucks best position itself for long term success? 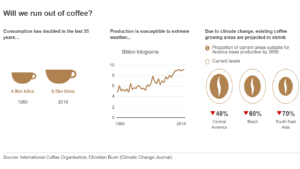 [1] Emma Mills, “’Coffee could be extinct by 2080′: why climate change may eradicate your daily latte,” The Telegraph, September 1, 2016, http://www.telegraph.co.uk/food-and-drink/news/coffee-will-be-extinct-by-2080-climate-change-could-spell-an-end/, accessed November 2017.

Race to the Last-Mile: Challenges to Wal-Mart E-Commerce Deliveries

Clouds on the horizon? Nestle, climate change, and the future of bottled water.

Student comments on Climate Change is Mugging Your Coffee