With over 610 container vessels globally, Maersk Line accounts for 15% of total maritime freight traffic and is the largest container shipping company in the worlda. Among the Copenhagen-based company’s most important routes is the Europe-to-Asia sea lane transiting through the Suez Canal Route (SCR)a [Exhibit 1]. At around 17,500 transiting vessels and 822mm1 tons of cargo shipped in 2015c, the Suez Canal accounts for 15% of global maritime tradeb and is the main nautical artery connecting Europe to Asia.

The SCR is a critical part of Maersk Line’s business given strong import-export activity between Europe and Asia. Asia is the largest destination for European exports – in 2015, Asia purchased 35% of EU goods traded outside of the EU d. Likewise, Europe is the largest non-Asian export destination for Chinese, Indian, and Japanese goods. In 2015, the EU purchased 12.4%, 11.2%, and 11.4% of 2015 exports from China, India, and Japan respectivelye. 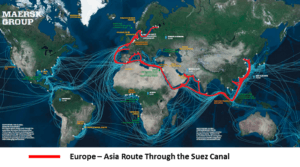 Climate change is twice as destructive in the Arctic as it is elsewhere on earth. From 1951 to 2012, temperatures in Greenland rose by 1.5°C compared to a 0.7°C average global rise during the same periodf. The effects on the Arctic Ocean have been particularly stark. In 2012, minimum summer sea ice levels decreased to 3.4m km2, a 60% drop relative to the 1960s. Some researchers predict ice-free summers in the Arctic Ocean starting in 2026b. Where sea ice isn’t disappearing, it is becoming thinner, unlocking new Arctic sea lanes and extending shipping seasons for existing onesg.

In response to thawing sea lines and improving navigation conditions, arctic cargo activity has grown dramatically as shipping companies seek shorter routes. Of particular interest is the Northern Sea Route (NSR) which provides an increasingly attractive shortcut linking Europe to Asia [Exhibit 2]. Maritime shipping through the NSR has risen from 110m tons of cargo and four vessels in 2010 to 1.4mm tons of cargo and 71 vessels by 2013h. These numbers are still insignificant relative to the Suez Canal, but they are expected to increase moving forwardg.

How will Maersk Line benefit? New shipping routes along the Arctic Ocean present an interesting long-term opportunity for the company: to reach Asia through the NSR rather than the SCR. Taking the Yokohama – Hamburg route as a yardstick, the NSR cuts distance traveled from Europe to Asia by 37% and time traveled by 32%i relative to the SCR [Exhibit 3]. The shorter distance traveled translates into significant cost savings in fuel (in the order of 35 to 45%)i. The lower travel time decreases salary costs per trip and increases overall fleet capacity as individual vessel cycle time2 decreases. 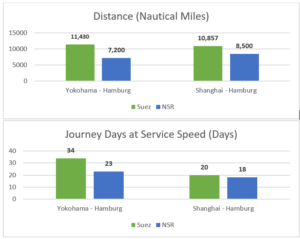 When the time comes to capitalize on this opportunity, Maersk will need to invest in ice-water navigation and advanced planning and communications technologies.

For starters, Maersk will need to supplement its fleet with specialized vessels capable of navigating the Arctic’s icy waters. These vessels will be equipped with reinforced hulls designed to withstand collisions with ice, as well as specialized steering and propulsion systemsb. In addition, Maersk will need to invest in icebreakers, special-purpose ancillary ships developed to clear cargo ships’ paths of iceb.

Ice sheet placement, extent, thickness, and consistency vary wildly throughout the NSR and at different points during the yearb. Establishing a commercially viable shipping line in the NSR will require careful surveying of weather conditions and ice formations as well as diligent planning.

Moreover, given the route’s proximity to the north pole and the limited satellite coverage in the Arctic Ocean, Maersk will need to invest in specialized communications and navigation equipmentb.

Navigating the Path Ahead

Maersk Line must time its entry into the NSR carefully – early enough to be a first mover, but not before NSR ice levels become manageable for full-size cargo ships.

Though Maersk’s CEO has been giving Arctic shipping routes the cold shoulder, dismissing them as long-term opportunitiesj, the company should keep close tabs on thinning Arctic ice sheets and be prepared to enter the market when the time is right.

The shipping industry operates on razor-thin margins (Maersk Line reported 2015 net income margins of ~5%k) and limited differentiation. The NSR is an opportunity to provide customers with faster shipping at lower prices, as such, first movers will be handsomely rewarded with market share gains in the short-run.

The path ahead is risky given the required capital investments and the logistical complexity inherent in navigating unfamiliar waters with commercial cargo vessels. But with its low-leverage balance sheet (14% 2015 Debt-to-Assets ratiok) and its USD 5 Bn war chest3, k, Maersk is currently well positioned to sail ahead.

Maersk should consider entry into the NSR a strategic priority and pursue it aggressively. The company would be ill-advised to let this titanic opportunity cool off.

2 Cycle time is defined as the time it takes a vessel to complete a given one-way trip (in this context an Asia – Europe, or Europe – Asia trip)

b Raza, 2013, “A Comparative Study of the Northern Sea Rout (NSR) in Commercial and Environmental Perspective with focus on LNG Shipping”, https://brage.bibsys.no/xmlui//bitstream/handle/11250/192946/Raza_Z_2013_Masteroppgave.pdf

Weathering the Storm: Kleiner Perkins and the Tragedy of Clean-Tech Venture Capital

Going out of business! Reduce emissions by increasing diesel consumption