Scotland has not been immune to the effects of climate change. Since 1961, temperatures have increased by 1 degree Celsius, resulting in the growing season increasing by 30 days each year. Average annual precipitation rate has risen 27% since 1961[1]. The combination of these effects has led to a rising yield in barley, a key ingredient of single malt Scotch whisky. Another key ingredient of Scotch whisky, yeast, is negatively affected by the rise in temperature, decreasing the yield[2]. Such factors make climate change an important interest of whisky producers. Fortunately, the highly wasteful process of producing whisky gives its producers ample opportunity to do their part to reduce the human effects on climate change. In this, The Glenmorangie Company, producer of scotch whisky based in Tain, Scotland, has been an industry leader[3].

To address the challenges of climate change, Glenmorangie began working with Aquabio, a company a leading manufacturer of biologic water restoration, water reclaim, rain harvest, odor control and reverse osmosis systems[4]. Aquabio had made a name for itself by introducing innovative ways to implement water recycling in a wide range of industries, such as food and drink, bio fuels, paper, landfill, and pharmaceuticals. Their task with Glenmorangie would be similar: to design and build the whisky industry’s first anaerobic membrane bioreactor system. Building such a system properly, though, would allow Glenmorangie to treat its wastewater produced by their distillery using natural biological processes. Further, building the plant would create energy in the form of methane rich biogas, thereby reducing the need for fossil fuels to run the plant[5].

In the summer of 2017, Aquabio did exactly as they set out to do by completing work on the Glenmorangie Ross-shire distillery in Scotland’s Northern Highlands. Their work successfully converted Glenmorangie’s largest factory to a low-energy anaerobic membrane bioreactor, or anaerobic digester (AD), plant[6].  The distillery effectively reduces the output of wastewater by up to 95 percent while creating biogas, which is then used as energy. The biogas indeed reduces the need for the factory use of fossil fuels as the biogas is used to heat the stills (the apparatus that uses a boiler system to selectively evaporate values of the whisky that are of no commercial value, thereby increasing the alcohol content) in which the spirit is made. An unplanned benefit of the new plant is that the standard of the wastewater produced is improved as well. Also, as planned, the plant improves the quality of the diminished amount of liquid waste that is discharged into the Dornoch Firth, a coastal water located near the distillery[7].

Creating such a distillery has allowed Glenmorangie to protect the environment and limit its contribution to climate change for the next several years. To extend that effect for the medium term, Glenmorangie needed to ensure that its diminished sewage levels, high quality of sewage, and reuse of biogas. To ensure the long-term advantages of the plant, Glenmorangie had Aquabio automate the plant, allowing Glenmorangie to govern the plant’s actions remotely online.

While these measures set an impressive example for the whisky industry as a whole and drastically cut the damage Glenmorangie factory’s have produced, there is still more they can do. Although they have built the plant in a time when solar panels are more efficient than they ever have been, Glenmorangie has not taken any steps to replace their fossil fuels with energy from the sun. Further, while the plant has innovated the way that a whisky plant can run, it has not effectively shared these techniques and lessons learned with other whisky producers. To improve, they could establish a council for whisky industry leaders dedicated to reducing their negative impacts on the environment by sharing lessons learned and allowing scientists and researchers to visit each other’s plants to effectively learn how best to improve environmental operations.

While these steps would improve their footprint, do they do enough? Glenmorangie has decreased the amount of sewage it will pump into the firth, but is any amount acceptable? Are there different, important lessons to learn from other liquor manufacturers? Have beer distilleries figured out any methods of reducing their environmental footprint that might be helpful to Glenmorangie as it seeks to become more environmentally friendly? 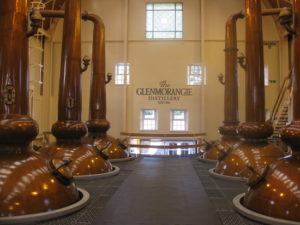 [3] “Environmental About Us”, The Glenmorangie Company, 2017, http://www.theglenmorangiecompany.com/about-us/environmental/, accessed November 14, 2017

Hubble Contacts in an Era of Isolationism

Student comments on Can The Glenmorangie Co Lead the Whisky Industry to Greener Pastures?