Located on the coast of Doonbeg, Ireland, the Trump International Golf Links & Hotel is threatened by the effects of rising sea levels due to climate change. The 18-hole golf course was originally purchased by Donald Trump in 2014 via a distressed sale, re-opening on May 14th, 2016 after significant renovations (i).

To counteract the threat of rising tides overflowing into the golf course, the resort has filed plans to construct a 1.7 mile wall through Doughmore Beach(ii). The project would require 200,000 tons of boulders and rise 15 feet high, creating a barrier between the resort and the Atlantic Ocean(iii). While the wall presents an opportunity to preserve the integrity of the course, groups such as the Irish Surfing Association, West Coast Surf Club, Friends of the Irish and Environment, and Save Doughmore Beach are protesting its construction due to the potential damage it could do to the Doughmore ecosystem in addition to restricted local access to the beach (iv).

Besides protests by environmentalists, Trump International Golf Links saw resistance from local planning regulators and the Irish government, which rejected the proposal for permit in September 2016 (iv). However, the project does have some support from local residents who fear that potential flooding would eventually harm surrounding houses in the area unless a barrier is created.

According to NASA, global sea levels have risen 85mm since 1993 alone, and are rising at a rate of 3.4mm per year (v). This does not bode well for Doonbeg, which sits 16 ft above water along the coastline (vi). It is thus a concern for the resort to explore options that would mitigate the inevitable flooding of the golf course, however it is important to consider various options before taking any kind of action because it could have lasting effects. 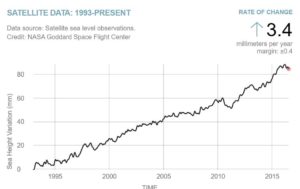 One alternative to building an outright wall is to create a natural levy that prevents the water from encroaching onto the golf course. This would in effect create a barrier made of sand and mud which increases the elevation of the land located just beyond the beach. While not as much of an obstruction as creating a wall of rocks, natural levies still create an eyesore and eventually wear out over time by the weather.

Another alternative is to keep the beach as is and convert it into a conservation in the decades to come as the water level rises. The beach and surrounding sand dunes hold a unique ecosystem which benefits the surrounding environment. Preserving this land and selling it back to the government or private provider of capital allows for the course to be relocated to higher ground. Given the current rate at which the sea level is rising, it is doubtful that there would be an immediate threat to the golf course going underwater in the coming decades. The underlying motivation seems to be more of a reactive one that relies on short term solution to a longer term problem.

It is important to always consider the consequences of man-made changes to natural habitats such as the beach coastline. Creating a 1.7 mile stretch of stones is a temporary fix to a problem that will ultimately overcome the solution in the long run. Not to mention the significant aesthetic and environmental changes that will result as well. While the decision has yet to be finalized on whether the wall will be constructed next to the resort, the key takeaway is that every man-made decision has a clear consequence, and that we as humans must work together to make the world a great place to live for the decades and centuries to come.