“Limiting warming to 1.5°C would require transformative systemic change, integrated with sustainable development. Such change would require the upscaling and acceleration of the implementation of far-reaching, multi-level and cross-sectoral climate mitigation and addressing barriers.”

Over the next twenty years, the government of the United States of America faces challenges in funding the country’s existing social benefits programs or redefining such programs’ benefits for future recipients. In addition to these and other formidable domestic challenges, experts in the scientific community suggest that stemming global temperature and sea level rise will require a concerted effort from all world governments, including that of the United States. Figure 1. [3] below illustrates current temporal trends towards critical milestones in benefit funding and climate change. In order to address these challenges under such a time constraint, government bodies in the United States stand to benefit from rapid and cost-effective ideation and solution development. 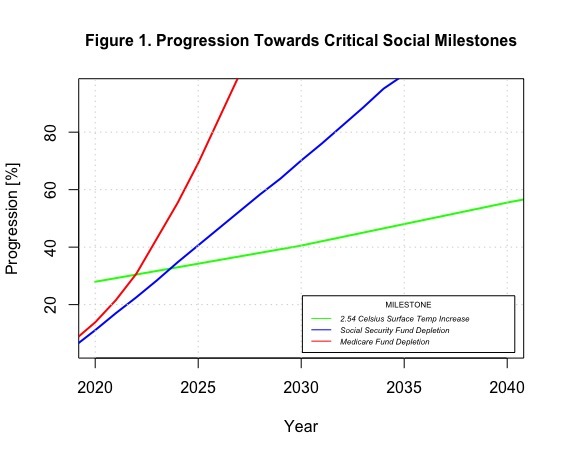 Open innovation initiatives offer one path forward towards this combination of cost efficiency and speed for addressing these critical issues. Importantly in the governmental context, open innovation platforms have been cited to increase organizations’ cost efficiency and innovation even in monopoly conditions. The “X-efficiency” concept describes the efficiency of an agent operating in a near monopoly environment that lacks competitive pressures. A study by JinHyo Yun, et al. indicates that installing transparent economic devices that enable the public to participate in product or process development activates user-based open innovation and enhances enterprise “X-efficiency”. [4] On the speed front, research by JinHyo Yun, et al. also indicates that open innovation platforms activate “economies of diversity” that identify niche market needs and rapidly draft solutions around these needs. [5]

For its part, the U.S. government has already taken steps towards open innovation over the past decade. The modes by which the government has participated in open innovation can be categorized in two ways: an inside-out approach of increased transparency to public data and an outside-in approach of gathering inputs for particular projects. On the inside-out front, the Data.gov and Regulations.gov initiatives illustrate this new paradigm of transparency. Underpinning these repositories is the idea that a common knowledge base of data provides a starting point upon which innovation from outside can be built. Importantly, these datasets are as openly available as they are machine legible, allowing not only public users to access them but also allowing for the programmatic consumption of the information. Crowd-sourcing and public competition are the main mechanisms by which the government is entertaining outside-in inputs for innovation. As a mechanism for gathering public insights on pending patents, the US Patent & Trademark Office’s “Peer-to-Patent” program is an illustrative example of crowd-sourced innovation. In the initial pilot of the program, a peer reviewed patent set demonstrated a significantly lower need for prolonged review by the patent office, as compared to the overall patent population. [6] Further examples of the outside-in approach are evidenced in the Presidential Innovation Fellows program that staffs industry experts inside government agencies and in the USAID’s Development Innovation Venture (DIV) program that seeks to fund innovative product offerings submitted by the public.

While attempts at open innovation have been made over the past decade within the U.S. government, the examples thus far have kept distance from the contentious and politicized arenas of public benefits reform and climate change solutions. In the near- to mid-term, the government should seek to open the dialogue and challenge these existing open innovation networks to address such contentious issues, allowing the discussion to progress in a bottom up way towards solutions. Open innovation as we have seen it in the U.S. government so far has been relegated to behind-the-scenes efficiencies (Peer-to-Patent) and tangential product offerings (DIV) but has not fully entered the arena of civic engagement in public policy. The government would do well to experiment more with these open platforms in these areas even if only in limited ways to begin daylighting, discussing and pushing for innovative policy and cost solutions to these more intractable and time-constrained issues.

As the government continues to explore open innovation networks, a few questions arise as to how these networks may reshape existing government operations. Firstly, can an effective open innovation platform feed into the “front-end” of government in policy making or will these networks only feed “back-end” efficiency and tangential service offerings? In a related way, if an open innovation platform does cross over into the policy making arena – does traditional bureaucracy exist alongside the network in a purely additive way or does the open network replace certain rungs of agency control? Or is there another mode of coexistence altogether?

Student comments on Beyond Bureaucracy: Open Innovation in the U.S. Government