For decades, the cost of new drug development has been rising at an unsustainable clip and pharmaceutical companies have had to look outside the proverbial four walls of their companies for the cure. The estimated cost to approve a new drug in the U.S. has ballooned to $2.6B, growing at an 8.5% CAGR since 2003. [1] In 2009, Eli Lilly pioneered one of the first open innovation platform for researchers to submit new chemical molecules for a particular drug target. [2] Since, pharmaceutical companies have intuitively partnered with academia, launching contests for scientists to submit proposals and awarding grants to winners. The results? Greater reach and unexpected discoveries at a lower cost vis-à-vis in-house R&D. 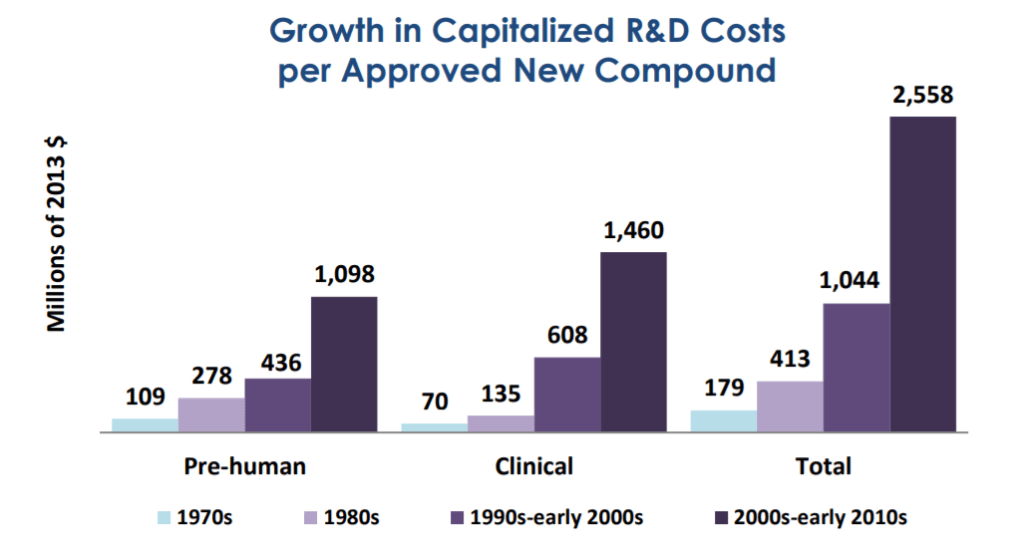 Pfizer (NYSE: PFE) is the world’s largest biopharmaceutical company, achieving $52.5B of revenues in 2017 [3]. Despite its success, Pfizer has not been immune to the industry’s headwinds; patent cliffs on its blockbuster drugs such as Zoloft, Lipitor, and Viagra have made it necessary for the Company to launch 5-6 successful drugs per year to sustain growth. [4] As part of its medium to long-term strategy, Pfizer is addressing these R&D challenges by cultivating a culture of authentic collaboration, shared decision making, and aligned incentives. Crowdsourcing initiatives were launched in 2012 and are housed in the Center for Therapeutic Innovation (CTI), a R&D network that uses a collaborative model to bring ideas to market. Since, the Company has sponsored 100+ challenges and unearthed 11k crowdsourced ideas. [5] In the near-term, Pfizer will continue to stretch its innovative reach even further, by not only tapping into the ingenuity of top researchers, but also harnessing the insights, creativity, and horsepower of non-scientific contributors. 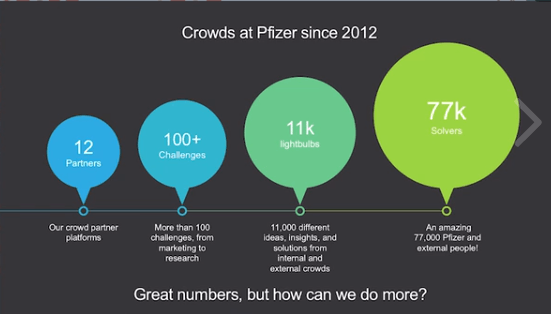 In 2014, Pfizer collected millions of data points for its research on Chronic Obstructive Pulmonary Disease [a] study. However, in-house technology at the time would require ten hours to analyze genetic markers for a single trait, creating a coding bottleneck. Knowing its technological limitations, Pfizer launched a coding contest. The winner, a French coder who worked at a digital marketing company by day, developed an algorithm that reduced processing speed to 30 seconds. [6]

As healthcare becomes increasingly consumer-centric, Pfizer is pioneering ways to collect novel data directly from the consumer. In 2016, Pfizer became the first pharmaceutical company to partner with Indiegogo, a website that helps individuals and corporations solicit funds and ideas. Through the crowdsourcing platform, Pfizer tapped into Indiegogo’s vast pool of entrepreneurs and challenged people across America to develop the next new big idea in healthy aging. This partnership exemplifies another benefit of open innovation: creating awareness around social issues such as challenging misconceptions of aging. [7]

The Future of “Failing Fast”

Crowdsourcing is analogous to attaching a high-tech battery pack to an existing machine (e.g. traditional R&D department) to improve power and speed at a fraction of the cost of upgrading the machine itself. Crowdsourcing enables large and risk-adverse companies to function as nimble start-ups, by allowing companies to move fast and fail fast. This “fail fast” mentality, however, is not without inherent risk. Pfizer must acknowledge the risks of crowdsourcing medical problems to potentially untrained individuals. As such, in the near-term, management should set quality standards, and define which questions are suitable for crowdsourcing. In the near to medium-term, management should be highly critical to crowdsourced ideas, particularly those with clinical implications, and be willing to shut down entire campaigns that show signs of failure. In addition, lingering in the background of open innovation is the issue of intellectual property. Particularly as the pharmaceutical industry is under fire for ethical issues such as price hikes, Pfizer must commit to fairly compensating and awarding credit to all contributors of its projects.

When it comes to one of the most devastating disease, cancer, researchers have already been using crowdsourcing to surface both professional and non-professional views on clinical trial design, care plans, and various other important R&D questions. [8] One can argue that open innovation is particularly effective in the healthcare industry due to the “do good” nature of the field as crowdsourcing taps into people’s intrinsic motivators to help improve global health and find a cure for cancer.

[a] Chronic inflammatory lung disease that causes obstructed airflow from the lungs.

Student comments on An Open Call for Help: Can Pfizer Find the Cure for Cancer… Outside the Walls of Pfizer?