Taking it all the way

Poised to become the first trillion-dollar company, Amazon always has been on the forefront of innovation, especially in its core value proposition of seamless, quick delivery across its global supply chain [1]. As global eCommerce sales are expected to grow by 23% in 2017 to account for one-tenth of global total retail sales [2], the digitalization of the “last mile” of delivery has become paramount. This final segment of the supply chain has been historically inefficient and costly, comprising up to 40% of the total shipping cost [3]. For Amazon overall net shipping costs have increased by more than 43% in 2016, thereby surpassing the net sales growth of 26% for the year [4].

Several key trends fuel the pressure on Amazon’s last mile supply chain as it needs to become faster, more granular and more precise in order to keep up with changing expectations and customer demands. (See Figure 1) 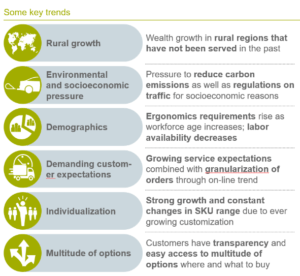 At the same time, a number of disruptive technologies have emerged that are likely to enable the digitization of supply chain management. These technologies – ranging from advancements in computational power that will transform the Internet of Things (IoT) to breakthroughs in artificial intelligence – will transform the last-mile delivery operations for Amazon. However, it has yet to be decided what ultimately will cause the paradigm shift in last-mile deliveries [6].

“The best way to predict the future is to invent it.” (Alan Kay)

Over the past years, Amazon has explored a variety of options and technologies to address the opportunities and challenges of last-mile delivery.

In 2012, Amazon filed a patent for an anticipatory shipping method that promises to significantly reduce delivery time by initiating the shipment of products before the actual order has been submitted [7]. Using insights on previous orders, product searches and even the time of cursor hovering, Amazon predicts and ships your future orders, thereby significantly reducing delivery times [8].

Another technology that has recently been patented revolves around mounted 3D printers in delivery trucks that could print purchases on the go and deliver them immediately [9]. By using this technology Amazon would not only save significant time on the last mile, it would also reduce its dependence on warehouse space and costly sorting operations.

Another hot topic in digitalization of supply chains is unmanned aerial vehicles (UAVs), or drones. In December 2013, Jeff Bezos announced his plan to use drones to deliver packages up to five pounds in a 10-mile radius around Amazon’s fulfillment centers [10]. Using octocopter aerial drones to fulfill orders has massive implications for both delivery time and cost. Not only could customers receive their items within 30 minutes but also, based on a research report of Deutsche Bank, drone deliveries have the potential to reduce shipping costs by half [11].

“Only those who dare to fail greatly can ever achieve greatly.” (Robert F. Kennedy)

Given the willingness of Amazon to revolutionize last-mile delivery combined with its financial firepower to push the boundaries of what is possible, few stones will be left unturned. Nevertheless, I believe that there are some additional levers that Amazon can improve on as well as some significant risks that need to be mitigated in order to ensure ultimate success.

Some critics argue [12], that it is unlikely that AmazonAir drones will become reality given the obstacles of prohibitive state and underdeveloped state regulations as well as growing privacy and security concerns. Hence, the management has to engage in costly lobbying practices and an extensive testing program to make the idea a practical reality.

Regarding the predictive shipping algorithm, one also has to realize the potential for errors that it could cause, in turn causing costly returns. To minimize those costs, Amazon might consider giving customers discounts, or convert the unwanted delivery into a gift to build additional customer loyalty.

All in all, I believe that Amazon’s management is well equipped for the transformational impact that digital technology will have on its supply chain. My recommendation would be however to not overpace to ensure that safety (drones) and customer satisfaction are never put in jeopardy.

A giant will find it difficult to hide

As Amazon reaches its goal to successfully transform the status quo of last-mile delivery, the technologies that start as internal tools will become third-party services as an additional income source. The play to establish Amazon Logistic Services as a new platform for freight forwarding could be the next logical step.

(1) Consequently, the question arises whether Amazon has set its eyes on the logistics industry and whether the company will be able to compete with and outperform the established players?

(2) If yes, will that be possible without triggering interest from regulators given its increased market power could potentially pose anticompetitive concerns?

Getting personal: What digitization and customization mean for Nike’s supply chain

Digitalizing the supply of household appliances in Turkey: Arcelik

Student comments on Amazon – In Prime position for the last mile