Playing sports is all about emotions, speed, strength and talent. Or is it? There is a limit to how much better one team can be than another with regard to these player driven factors. Today teams who want to rise to the next level are using technology as their secret weapon to win. Technology may not understand the game as well as the coach does, but it enables the coach to collect information and gain new insights about the game which wasn’t accessible until a few years ago. 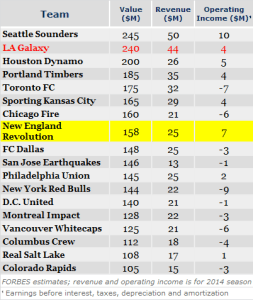 The New England Revolution, an MLS soccer team that plays in Foxborough Massachusetts does not have the highest budget in the league. It neither has the best players nor even the highest number of fans attending their games. However, last year the Revolution finishe
d second out of 20 teams, losing only to the rich Los Angeles Galaxy team in the championship match. The Galaxy budget is 50% higher than the Revolution and its roster includes several all-star players. (Attached is Forbes MLS most valuable teams table.)

So what makes the Revolution a winner team? The answer lies in the team’s analytics group which uses the most innovative technology solutions to monitor, track and analyze every team, player and event of every game. The most important things the Revolution uses technology-wise are GPSports for the sports science and the Panoramic Cameras for tactics. With GPSports, they are able to track a player’s heart rate, velocity, acceleration, and work load in training, and hopefully soon in matches. This enables the Revolution to manage a player’s fitness and hopefully prevent injuries, or sense when something isn’t fully correct. This risk of injury is not trivial considering that at any given point in the season an average of 20% of all players were sidelined by one injury or another.

The panoramic cameras enable the Revolution to see the whole field of play in matches, rather than simply the action on the ball. While every team has access to this technology, the Revolution maximize its benefits by also having a contract with MatchAnalysis.  MatchAnalysis syncs the video with the TV feed and tags all of the events in the match (corners, passes, etc.) so that they can easily edit the video for the coaches to reflect on our performances and research their opponents. The Revolution can therefore see movement and interactions away from the main play which allows them to spot vulnerabilities in either their own or their opponents’ shape.

The advantage the Revolution gets from using these new technology tools is crucial to the team’s path to success. Not only does the team perform better and accumulate more wins than other teams, the efficiency that this technology enables means that the Revolution can still win without big name players who demand high salaries by maximizing the potential of their player roster. Additionally, they keep their players more healthy and that way they more fully utilize their talent. Lastly, the result is clear, the Revolution are the second most profitable team in the league (on EBITDA). The Revolution is only second to the Seattle Sounders which have an average attendance of 43,000 fans each game compared to the Revolution’s 18,000. However, even in the attendance category the Revolution is considered a winner team. Located in New England, a young team like the Revolution that was only established 20 years ago must compete with many other regional sports teams for the average New England sports fan allegiance. The Patriots, Red Sox, Celtics and Bruins (all local professional teams in other sports leagues) have a long tradition of attracting fans. However, the Revolution leads the MLS in attendance growth from last year presenting an impressive 20% growth from 15,000 fans in 2014.

The Revolution moto is to win every day, on and off the field. By adopting technology, they are constantly growing in terms of revenue, profits and attendance. It would not be a surprise to see them also winning the MLS championship.

A TED talk about integrating technology in sports as a great tool for analyzing data.