Yelp is a classic example of the power of crowd-sourcing. Founded in 2004, it collects crowd-sourced reviews on local businesses, specializing in restaurants but covering almost any kind of brick-and-mortar business. On its website, every business has its own listings page which displays objective information about the business (e.g. hours of operation, menu) as well as user reviews in both an aggregated 5-star rating form and as individual ratings and comments.

Today, it is an impressive source of information in the US. Users certainly demand the information provided by Yelp: it reported having 83 million monthly unique visitors in 2015, and there is research showing that a one-star increase in rating can lead to a 5-9% increase in revenues for the business.[1] Users are also eager contributors of reviews: a cumulative total of 83 million reviews have been written on Yelp, and the most reviewed restaurant in New York City has over 7,500 reviews.

Although it is ubiquitous today, crowd-sourcing reviews was a novel idea ten years ago. Yelp solved the user problem of gauging the quality of a local business by empowering average people to be the reviewers. No longer would restaurant critics have to be anonymous, snooty professionals. Now, the average individual could contribute anything on his or her mind and give brief insight into their specific experience. What results is a strange but somewhat compelling mosaic of everyday user experiences: 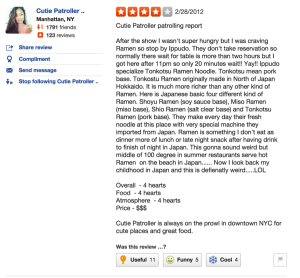 The usefulness of crowd-sourcing is evident in at least two other ways. First, there are now “review highlights” that look for common phrases in all reviews of a restaurant to help users discover the popular dishes at an establishment. Second, users can also suggest changes to the listing’s business information if they believe there is an erroneous fact (e.g. if hours of operation have changed).

How are users incentivized to contribute reviews? One way is through direct network effects. For example, Yelp is a magnet for negative reviews because users see it as a forum to get their complaints heard, since the presence of other users legitimizes the platform (Yelp has become a “system of record” on business quality).

To encourage reviews across the spectrum, Yelp has also implemented a number of smaller features to make posting reviews more fun for users. For example, viewers can give individual reviews an upvote on three dimensions: “Useful”, “Funny” and “Cool”. Moreover, every day in every city, there is a “Review of the Day”, where an individual review is selected for the front page, which ostensibly is an ego boost for the reviewer. Indeed, ego seems to be a good way to attract reviewers: each user has a profile page highlighting various social achievements on Yelp: 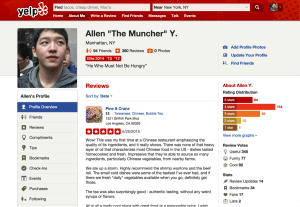 On top of all that, there is the “Elite Yelper” designation, a title bestowed only upon active Yelpers who have contributed a significant number of reviews to the platform. These Yelpers are not only rewarded with a special badge on their profile pages, but there are also dedicated events for Elite Yelpers. These events are highly publicized (though they are exclusive), and often feature free food from local restaurants. Many Elite Yelpers report having made friends, even romantic relationships, via these events.

Despite the success so far, Yelp may run into some difficulties with its crowd in the future. There are potentially slightly negative direct network effects on reviewers over time as the company grows. In the early stages, having users who write reviews leads to more users who want to write reviews, as Yelp became an established forum to express one’s opinion. However, once there are too many reviewers, then the motivation for each individual user to write a review decreases. It becomes harder for one’s review to be seen among all existing reviews, and it becomes harder to find a listing where one’s review “makes a difference” to the prevailing opinion.

If these negative direct network effects do exist, one might blame it on an imbalance in value creation and capture. Reviewers are creating a lot of value for Yelp, but they capture relatively little incremental value relative to a passive, non-writing Yelp user; Yelp captures almost all the value from review writers. In other words, at some point small ego boosts and Elite Yelper parties are not going to be enough to keep encouraging contributions from Yelp’s most loyal reviewers. This could be a problem going forward, not only because Yelp needs writers to cover new businesses, but also because their algorithms (e.g. spam detection, review quality, recommendation) likely grow stronger the more data is generated by individual users over time.

Yelp will need to figure out how to better share the value created with its value creators: the crowd of review writers. Yelp was an early and prominent user of crowd-sourcing ratings and empowering individuals, but today it faces much greater competition from the likes of Google, Foursquare, and OpenTable in this core arena, and will need to figure out what else it can contribute to a user’s life.

Student comments on Yelp: An old dog may need a new trick soon