“Energy is something that is hard to explain – it is something you feel of you don’t. I’d like to call it the ‘We’ generation” – Adam Neuman (founder of WeWork)

Defining what exactly WeWork is, is not a simple issue to resolve. Many outsiders view WeWork as a commercial real estate company seeking to provide temporary and short term shared working spaces.  Many others, including WeWork, might refer to itself as a Technology company or use broader terminology including ‘energy’ and ‘community-based if Adam Neuman, the founder, might be asked. This tension, arbitrary and straightforward as it may seem, was at the core of issues the startup experienced. How at its peak had this office-sharing startup been worth $47Bn (over 10X the valuation of similar office-sharing company IWG which boasted better results? 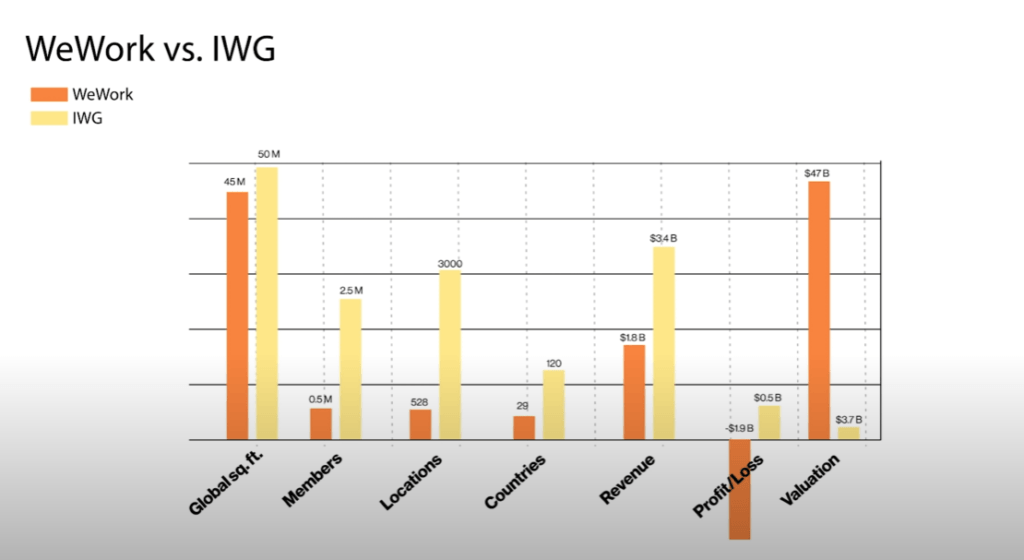 With companies such as Uber, Airbnb and others, the rise of the’ platform’ economy with the business model of creating a platform to link one side of users to another had grown significantly popular. Startups were often trying to find new use-cases for this model, and WeWork was one of the first to jump at the idea of letting out office space. Adam Neuman had sold an earlier coworking space in Brooklyn called “Green Desk” and believed that this space had even more potential. Adam saw how the economic crises had led to many empty buildings that were not being used, and on the other hand, he saw many people freelancing and starting companies who had nowhere to work. Adam believed that there was a way of matching these two groups.

The fundamental issue was that these freelancers and new startups could not take on these large leases due to many factors, including long-term leases, high deposits, and lack of company and credit history. This where WeWork would come in; WeWork would lease the large office spaces and divide them into smaller parts and lease to users at a low “$45/month for a desk”. This model had legs as the number of new startups in the USA rose at a meteoric rate, and all these startups needed somewhere to work.

WeWork’s differentiator was not only the price and convenience but a ‘sense of belonging’ and ‘community’ that freelancers and startups felt being WeWork space. They thought they had found a space to meet like-minded individuals and share their experiences with young and exciting individuals. On the back of this, WeWork aimed not only to be an Office leasing company but also to “accelerate the new world” of startups. WeWork from 2011 would start to expand at a break-neck pace, almost doubling each year to operating close to 4 million square meters of buildings around the world.

Capturing value was something that would remain difficult for WeWork to materialise. WeWork would take some of the most extravagant leases like the Lord and Taylor building in New York 5th Avenue for 5th Avenue but would need to keep pricing flexible and affordable for the often young and fragile startups to afford the WeWork spaces. In a flight to capture more value (and enhance the experience), WeWork diversified into opening gyms, having fitnesses classes around locations and opening online stores for software services. All of these additional add-ons were eventually a drag on the underlying business and not revenue accretive.

The scalability and sustainability question is tightly linked with this company as the rapid scale it took on without associated governance would lead to the company’s ultimate downfall. With the support of SoftBank and its leader Masayoshi Son – fuel was poured into the business in billions of dollars in further investments. Then eagerness to grow and acquisitive nature led to valuations sky-rocketing past $20Bn to even $47Bn. The underlying issue in all this was that the business was not responsible during the growth phase and was over-spending. Adam Neuman, the CEO, did not have enough restrain and governance around him. All this led to WeWork trying to IPO. When investors read their S-1, they realised that the ’emperor had no clothes’ and saw how the company was spending rapidly with no substantial business fundamentals, the sentiment of the company quickly changed. The company made some immediate changes, ousting Adam, selling non-core assets and cutting valuation to a fifth of its value.

The current state of WeWork put lots of digital-enabled platforms into question. Was the business model sustainable? Do these platforms create value, and if so, how do you quantify the value – probably not with a $47B valuation?