No other company till date has been able to create a global operating system for a predominantly physical sector at the scale which has Uber has done. AirBnB and WeWork have done the same for the real estate space but as of now Uber is more ubiquitous than either of them.

Uber is a digital operating layer over the transport and logistics industries. Let us see how has Uber arrived at the scale it is today (though it still can scale a lot in the transportation and logistics space) and what propels it.

Clear value proposition: Uber right from its inception has identified and served a job to be done for riders “a hassle free on demand car”. It has identified and diversified into various transportation modes such that as a rider, for going from my dorm to a friend’s place, it provides options which vary from $ 2.75 to $ 25 – thus, there is a car to fit almost everyone’s needs! In addition, it allows drivers (both professional and occasional) a hassle free experience of when they want to ride and whom they want to ride with.

Product: Uber has invested a lot in the product. Both from UI and UX perspective it is neat and seamless. Uber’s continuous investment in technology is evident in geo location techniques to match riders to the nearby cabs, features to improve safety, optimizing routes, surge pricing schemes to balance supply and demand.[b][e] To top it all it continues to invest in technologies which will make the experience more seamless and integrated – setting up of the AI lab in Dec 2016 is one of the many examples to prove the same. Uber does a lot of structured product experiments to see what works and what not.

People: Uber has a reputation of hiring driven people, who desire to create an impact on the world and are some of the smartest people in the various geographies it operates in. Uber is very selective and gives its teams a lot of autonomy. The surge pricing which is built on supply and demand economics was built by the Boston city team to check if more drivers were on the roads in the chilly winter nights because of higher payouts.[a] It worked and rest as they say is history!

Value Capture: Uber takes a cut out of every ride that is taken by the riders. This is it’s primary revenue source.
These elements are captured in this diagram below 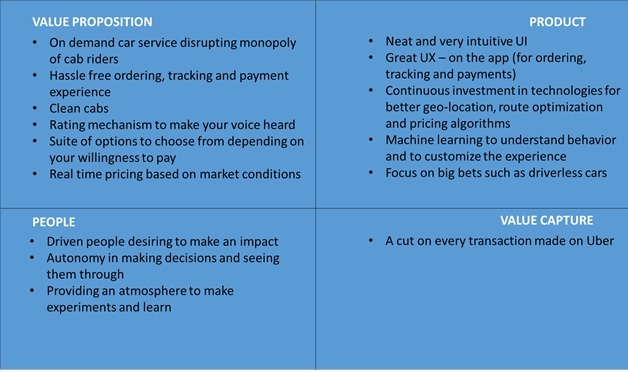 Today Uber servers in over half a thousand cities across the world. Being the operating layer between drivers and riders, it has reached this scale by relying on indirect network effects.

Initially, Uber took time in rolling out to new geographies and with time its ability to launch a new city became a lot better. Being a two sided market place, in its first market SF, Uber relied on a combination of clear value proposition, great product, free rides and word of mouth publicity to attract riders to its platform[c][d]. Simultaneously it attracted drivers. It followed a similar playbook in subsequent cities, with its brand value getting added to the list of reasons. The diagram below does a great job of explaining the Uber launch playbook. 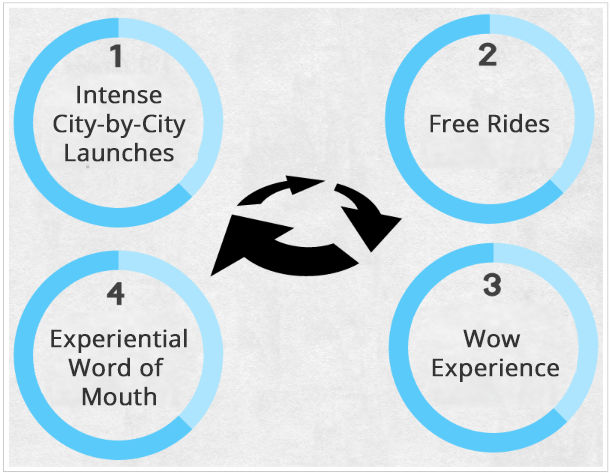 Source: GrowthHackers.com [d]
Uber relied not only on indirect network effects to get more drivers but also had schemes such as low interest car loans for drivers. This not only allowed it to attract drivers but also enabled it to get the drivers stick to its platform thus further strengthening its network.

What does the future have in store?

Although these network effects are local and several players (such as Fasten) are trying to take market share away from Uber by employing different business models, I would bet that Uber will triumph.

Concerns of multi-homing are valid but if one looks at the history, Uber is becoming more entrenched in the transportation fabric of today’s world not only through its simple on demand car app, but by diversifying into UberEATS, Uber for Business, Uber Freight and its ambitious investments into AI for making the dream of driverless cars come true – and this will allow it to always stay leaps ahead of competition.[f]

I believe Uber’s primary reason for triumph would not just be a better app but because a few years down the line we would not remember Uber as an on demand car app but we will recognize it as an intelligent platform simplifying transportation and logistics at unimaginable scale.

Student comments on Uber: Revolutionizing transport – one ride at a time!!