Who makes the calls?

Who really makes the decisions that guide the United States and its economy forward? Technically, the US is a democratic republic, meaning that every citizen doesn’t get to vote on every policy or bill.  It does however mean that everyone has equal opportunity to vote for representatives to make decisions for them. Every two years we elect approximately 469 congressmen and women, all 435 members of the House of Representatives and a third of the 100 Senators.  Unfortunately, in 2016 there were only 37 races, were even considered contested [1].  We also get to elect a President every four years.  Due to the system of the Electoral College, which is the topic for another discussion, a state basically casts all of its votes for one candidate.  This means that only the states with extremely similar numbers of Republicans or Democrats will have competitive races.  During the 2016 Presidential election only 11 out of the 50 states were considered to be in play; the rest were basically already decided. 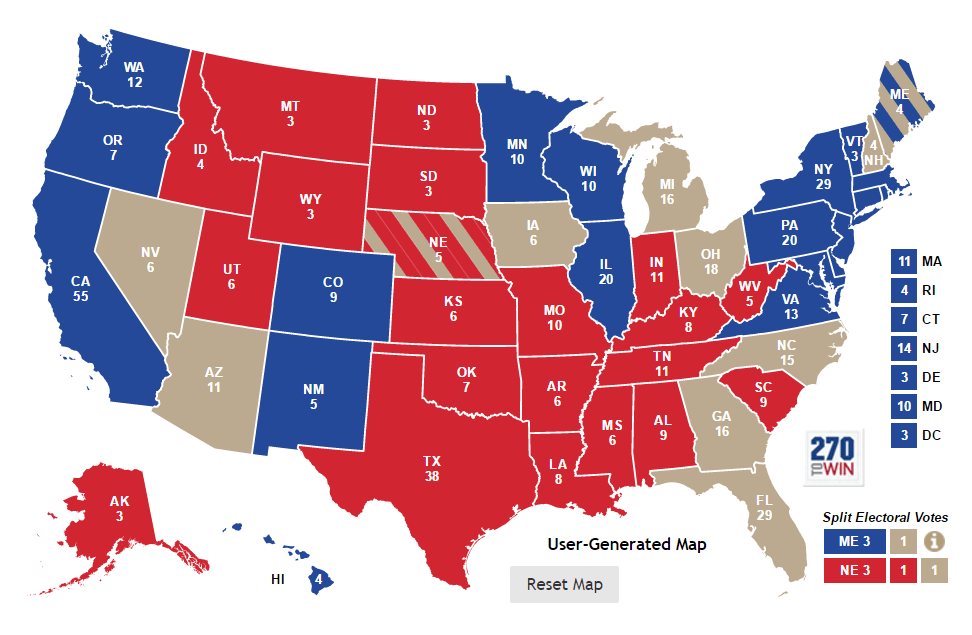 That’s it.  Every 2 years 8% of US citizens get a meaningful vote for Congress.  Every 4 years 11 states get to place meaningful votes for President.  All the while the 114th Congress, which was in session for 2015 and 2016, voted to enact 329 laws and passed 708 resolutions over two years [3].  This may have been the best system the founding fathers could come up with in the 1700’s, given the technology and transportation challenges of the time.  Can’t there be some way for members of congress to tap into the opinions of their constituencies to better represent them?

Imagine a mechanism by which a Congressman or Congresswoman could release a poll, the same way you would on Survey Monkey or other popular sites, every time there was an important vote.  The poll could be sent to an entire state for a Senator or a specific district for a member of the House of Representatives.   While I don’t necessarily think it would be a wise idea to always vote 100% with the way the crowd voted, but it would be a far more accurate representation than the current system.

Why would the crowd would participate?

At a time when trust of those in Washington DC, whether we elected them or not, is at an all-time low, I believe crowd participation would be incredibly high [4].  Not only do I think they would appreciate being better informed about what is actually getting voted on and when, I believe they would relish in the idea that they could compare how they would have voted to how their representatives voted.  While it is impossible for everyday voters to spend the time to read the pages and pages of bills being debated (the average bill is over 16,000 words [5]) it would force Congress to be able to boil down what they are deciding into manageable pieces.

In many political races, differentiation is the main goal.  What sets you apart from the candidate before you, from the opposing party, and from everyone else in Washington?  This could be an incredible way for a young politician to separate him or herself from the competition.  It would also be an amazing way to gain very accurate data on your constituencies and how they think and feel about various issues and over time and geography.

Why would it be better than the current system?

Two main features would make this system much better than the current system of vote and wait.  Being able to show a political exactly how their constituency voted on key issues would be a great way for their supporters to hold their feet to the fire about the many promises made during the campaign process, as well as opponents to call them out on instances when they weren’t representing their districts well.  More importantly though, is that it would encourage a more informed and involved electorate.  I would consider myself a fairly educated human, but I have no idea what is being voted on this week or this month in congress.  I often only learn how my representatives voted the next time they run for something, rather than before they happen.  So while there would be some obvious and extremely large challenges, surrounding technology, security, and data integrity, I cant help but believe it would be better than what we have now!

Student comments on Transforming Government – Giving some power back to the people!