The embattled newspaper industry is experiencing nothing short of an existential crisis. As traditional newspaper organizations attempt to transform themselves into digital media companies, the decline of their print business has coincided with the rise of digital “native” media platforms (such as Buzzfeed, the Huffington Post, and Vox Media) that are better equipped to capture value in the digital age. The New York Times, the most respected of all American newspapers, is a classic case study of Clayton Christensen’s theory on innovation and disruption. The discussion below summarizes why TNYT’s business model is not aligned with the evolving news industry, despite the fact that it continues to generate the highest quality reporting of any news publication. TNYT is fighting a battle it won’t win.

TNYT creates value in two fundamental ways: (1) generating high quality content and (2) delivering that content to as many readers as possible.

On the first point, TNYT is the undisputed leader in journalism. Since its inception, TNYT has been awarded 117 Pulitzer prizes, more than any other newspaper, and it has received a Pulitzer every year for the last fifteen years.  In addition to creating excellent content, TNYT is renowned for its curation of content – positioning and prioritizing articles meticulously so as to create the optimal experience for the reader. Unfortunately, the value of these core capabilities is being eroded in the marketplace. The news industry today is built around speed and virality, rather than thoroughness and quality. More on this later.

On the second point, TNYT boasts 1.1 million print-and-digital subscribers and 1.0 million digital-only subscribers, surpassing every other U.S. newspaper other than The Wall Street Journal. However, TNYT’s stiffest online competition is not from other newspapers, but rather from digital media platforms like The Huffington Post (see graphic below).

These digital media platforms are attracting more readers than TNYT, even when they are simply repackaging TNYT’s own content.  Their success is due to the transformation of the online content distribution model in two key ways: 1) leverage of big data and trending algorithms to prioritize article placement in real time, and 2) utilization of social media to spread content. Additionally, the digital media companies specialize in shareable, informal quick reads –the written equivalent of news bites—in contrast to TNYT’s emphasis on deep analysis and original thought pieces.  The content and distribution model of TNYT’s digital competitors are very well aligned with the nature of the news industry today: a 24-hour news cycle in which news is disseminated rapidly and digested quickly, usually online, and increasingly on mobile vs. desktop.

TNYT captures value in two ways: subscriptions and ad sales. TNYT offers two types of subscriptions (print-and-digital or digital only) and sells ads both in its print editions and on its website.

As TNYT’s print circulation has declined over the last two decades, so too have print subscription revenue and print ad sales. The value of each ad in the newspaper drops as the number of eyeballs reached falls. Not surprisingly, TNYT saw the writing on the wall and aggressively built a digital presence.

To be sure, the NYT has compensated for some of its losses on the print side with growth in the digital business. However, given the intense competitive dynamics in digital news (numerous digital media outlets offering free content, combined with low switching costs) and consumer behavior that favors shareable short pieces, TNYT is not competitively well positioned to capture value on the digital side. The graphic below from The Economist shows that TNYT is in a neck-and-neck race for digital eyeballs, despite its superior journalism. The second graphic demonstrates that TNYT has not been able to compensate for its print circulation decline with an increase in digital ad revenue. 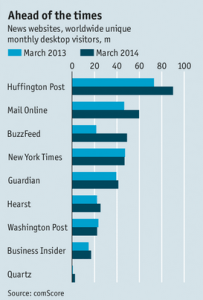 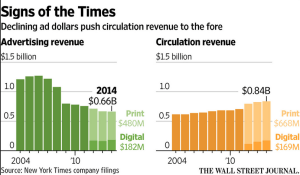 These dynamics are reflected in TNYT’s financials: in 2003, TNYT generated $551M in net operating profit, compared to $92M in 2014. TNYT’s weakened position in the news industry is also reflected in its declining market capitalization, which has fallen to $2.0B from a peak of $7.2B in 2002.

The writing is on the wall for TNYT, and they know it. In May 2014, an internal report written by TNYT strategists was leaked to the public: “With the endless upheaval in technology, reader habits and the entire business model, The Times needs to pursue smart new strategies for growing our audience.  The urgency is only growing because digital media is getting more crowded, better funded and far more innovative.”  It will require significant ingenuity for the NYT to halt its own disruption.

Blockbuster – From Blockbuster to Bomb: An Industry Leader’s Stunning Failure

Student comments on The New York Times: Outwitted in the Digital Age?