It is well-known that political campaigns and social movements are becoming increasingly digitized and data-driven. The 2008 Barack Obama presidential campaign notoriously set the new standard for election forecasting and data-driven campaigning (there’s a whole book about it!), and the 2016 Donald Trump presidential campaign pushed the boundaries even further as campaigning moved online, developing controversial new “micro-targeting” methodologies to win an election over social media.

However, what is not talked about as much is the emerging commercial industry developing the technology behind winning elections. Who are these players, and how do they create value for political campaigns and social movements?

Arguably the most important digital asset underlying a political campaign is what is known as the “voter file” (or “base file”). 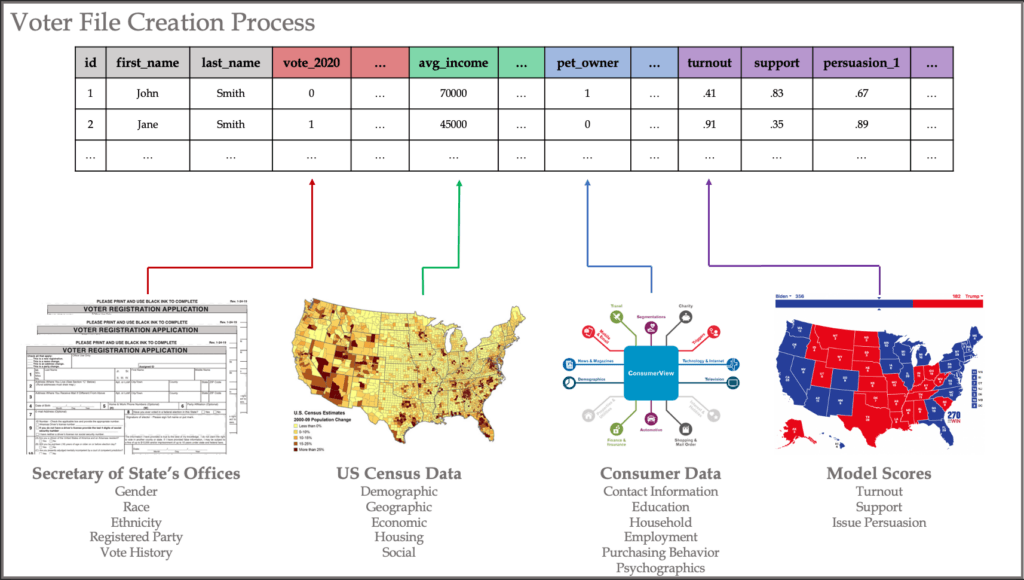 A voter file is the database of registered voters that underpins all technology and analytical methodologies in politics. The voter file is immense — merging numerous public and private data sources to compile thousands of data points on the almost 200 million registered voters in the United States. Public sources such as your state’s Secretary of State’s office and Census data provide data such as voter registration status, political party registration, demographic information, geographic information, and an individual’s voting history. Data from data brokers such as Experian or Acxiom can further provide known contact information, projected income levels, psychographics, and even purchasing behavior (everything from whether someone is likely to own a pet to whether someone purchases greek yogurt more on average).

The process to create and maintain voter files is a massive data engineering effort and requires the use of matching algorithms to merge person-level records from various sources.

Different companies provide voter files to each of the political parties.

The Republican Party (GOP) was the first to build a combined voter file in the early 1990s (15 years before the Democratic Party), though it wasn’t until 2012 until GOP-operatives developed The Data Trust, a for-profit company that determines which groups can access the GOP’s central maintained and enriched voter file.

In contrast, though the Democratic Party took longer to build such a voter file, the party’s enthusiasm for its need in the early 2000s was so profound that it actually splintered the market. Today two major voter file providers exist for the Democratic Party and Democrat-supporting organizations: Catalist and TargetSmart. The two companies compete on many points, including the accuracy and completeness of their voter file creation process and the data sources from which they pull to enrich the file.

Such an enriched file provides ample opportunities for analytics to help guide strategic and tactical decision-making on campaigns.

The most common analytical products produced for political campaigns are a set of three statistical models provided by companies such as Civis Analytics for Democrats and Deep Root Analytics for Republicans: turnout models, support models, and persuasion models.

Together, the turnout and support models are combined to produce election forecasts for every race in an upcoming cycle, from the presidential race all the way down to state house races.

These models are built by data scientists through a combination of historical data from voter files and surveys that are run leading up to the election. Analytics companies issue thousands of surveys a week to individuals on the voter file, asking them to indicate whether they are likely to turnout (for the turnout model) and which candidate they are likely to support (for the support model). Survey recipients are additionally placed through a randomized control trial (for the persuasion models) to see if their candidate support changes upon hearing their position on a policy issue.

Data scientists are then able to merge the survey results with the voter file and then train their statistical models. Upon completion of the model, they then score the rest of the voter file with their models, so each individual in the voter file receives turnout, support, and persuasion scores.

Political campaigns and advocacy organizations purchase these scores on a subscription basis, and processes are developed by the companies to refresh models as new survey data is completed leading up to the election.

The below demonstrates an example of how an organization might use the voter file to develop their election strategy. 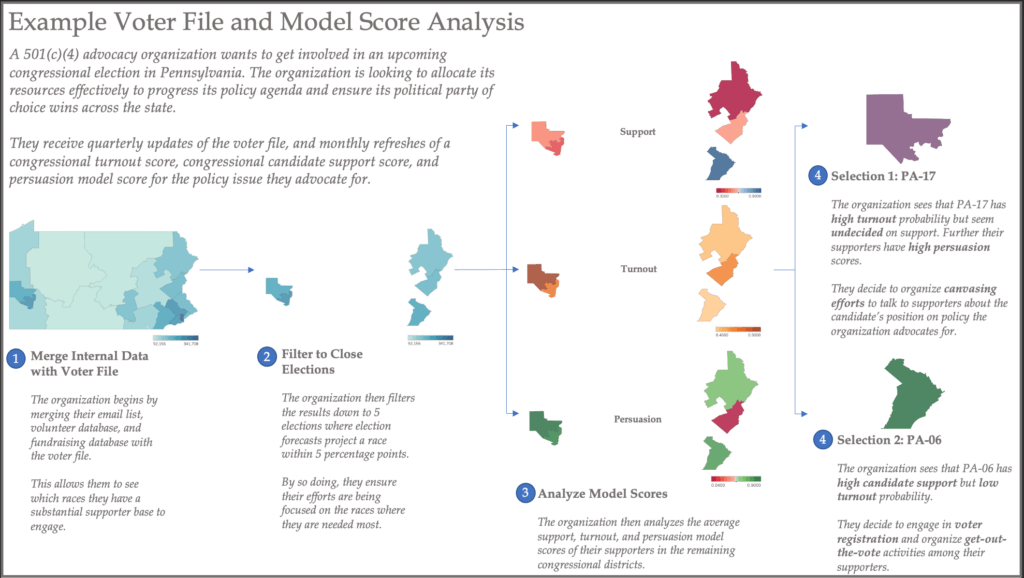 The graph above captures how data and analytics have reshaped the modern political campaign. Recent campaigns suggest that these tactics will continue to evolve as technology and channels of communication evolve. Companies across the value chain have built sustaining business models to support campaigns and advocacy organizations, and are constantly innovating to continue to provide value for their political party of choice.

And yet, the new normal for modern political campaigning raises significant questions.

One question that comes to mind is the implication of the hyper-optimization of political campaigns that has occurred through these new data-driven methodologies. As voters and citizens, though we expect our representatives to speak to and for all of us, campaigns are continually narrowing their resources to a minuscule subset of citizens that tip an election one way or another. Is this the political system that we as voters and citizens desire?

Finally, perhaps the most discussed question of the day is one of ethics, especially in the wake of the 2016 Cambridge Analytica scandal, which involved campaign tactics that some referred to as “psychological warfare” on the American people. There is no question that the rise of political data and technology companies have created a new set of commercial gatekeepers between voters and their representatives, and there are very few restrictions on the way that political entities can acquire, share, and use data. Calls for the establishment of industry norms and privacy advocates will certainly shape the industry, and time will tell how the industry evolves to meet the changing environment.

Student comments on The Business of Predicting and Winning Elections