There are markets where the incumbent appears vulnerable, where the legacy players seem old and tired, and where customers seem so desperate for something fresh that disruption feels inevitable. The financial information market is not that. Bloomberg invented the market in the 1980s and established strong network effects and high switching costs. The Bloomberg Terminal is a closed platform that integrates communications, data, news and analytical tools. Bloomberg’s success has been derived from the combination of functionality and proprietary knowledge. According to recent research, the majority of the 325,000 people using Bloomberg Terminals primarily use the Terminal’s chat capability (1).

The latest challenger to the Bloomberg throne is Symphony Communications Services. The company founded a year ago is attacking at the heart of what has, particularly of late, made Bloomberg so sticky: its communications layer. Symphony is an open-source, secure communication and workflow platform that aims to improve workplace productivity and connects users to their community (2). The CEO has emphasized the open-source capability to attract people in the future to build features like content on top of the platform (indirect network effects). In contrast, Bloomberg’s platform is closed. Symphony benefits from both direct and indirect network effects. The value of its communications product increases proportionally as more people use it. And it follows that as more people use the communications product, the value of developing applications on top of the Symphony platform also increases.

Originally, Symphony was an internal messaging system used by Goldman Sachs. But in October 2014, Goldman Sachs and 14 other highly-reputable financial institutions invested $66 million to create Symphony and bought Perzo, a secure communication application that provided end-to-end messaging encryption. Unlike Bloomberg’s business model that charges $24,000 per Bloomberg Terminal per year, Symphony charges $15 per user per month (although it is currently free for businesses and individuals with less than 50 users) (3). 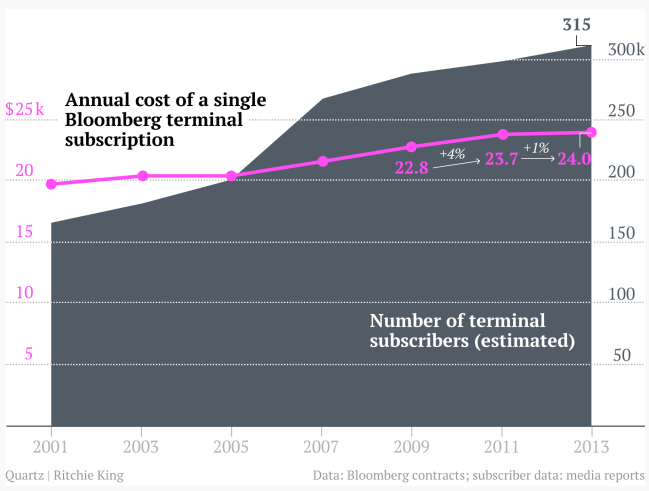 In taking Bloomberg head on, Symphony is challenging the notion that an entrenched platform with massive network effects cannot be toppled. It is laying out a playbook for how dominant networks can be unbundled and supplanted.

1. One network node at a time.

Symphony has actually taken a page from Bloomberg’s book and sold significant equity interests to a group of 14 financial firms (including Goldman Sachs, Morgan Stanley, JPMorgan, BlackRock, Citi). The firms are Symphony’s ideal early customers. In the 1980s, Merrill Lynch took a thirty percent equity stake in Bloomberg and helped finance the development of the Bloomberg Terminal (4). The backing of Symphony by some of Bloomberg’s top customers demonstrates the demand for a more open, secure, compliant communication platform in the marketplace. The consortium structure incentivizes the banks to use and test the product, of course. But more importantly, as a result of onboarding the entire personnel of a given customer all at once, Symphony can achieve critical mass density within a given company so as to mitigate the impact of having a smaller network for its users to interact with. Symphony can effectively side step the challenges of not having as many people for its users to talk to, because for internal communications the experience feels comprehensive from the beginning.

2. Direct attack on the incumbent’s network.

Symphony is attacking the incumbent platform in one area first. It does not initially seem concerned with replicating the full extent of the Bloomberg offering. Symphony is not providing financial information. It is only offering chat services. The communications layer of its product is where Bloomberg enjoys the most powerful network effects. Symphony’s is therefore a higher risk, higher return strategy. If Symphony’s network can begin to gain momentum, it will also directly weaken Bloomberg’s position.

3. Differentiate in one, clear way.

Symphony is differentiating itself with one major, “calling card” improvement: increased privacy and security. Symphony has identified one specific way in which its product can be better than Bloomberg’s chat offering. Indeed, if Bloomberg customers are to take a step back in terms of strength of network initially, Symphony must be able to deliver on an under-served need that is highly valued. Given the 2014 scandal in which Bloomberg journalists were accused of accessing Terminal customer information, it is no surprise that many customers have grown increasingly skeptical of using a Bloomberg Terminal that simultaneously supports a massive news-gathering organization. If Symphony is sufficiently better at “securing” customer’s information, it is plausible that customers would be willing to switch despite a smaller network with which to communicate. The clarity of Symphony’s value proposition makes it easier for people to understand why they should be willing to make this trade-off initially. On September 14, 2015, the New York State Department of Financial Services reached an agreement with four major banks about the appropriate record-keeping requirements and protections to guarantee responsible use of Symphony (5). The ruling legitimizes Symphony’s security technology in the eyes of the regulatory industry, should help avert future regulatory headaches for financial firms, and increase the value of Symphony services to customers. Symphony’s CEO David Gurle talks about the deal on CNBC.

It is too early to know whether Symphony will be successful. The firm’s current strategy seems promising though. Symphony seems aware of the importance of network effects to its growth. The firm is carefully positioning itself to attack a strong incumbent like Bloomberg. The creators hope Symphony will become the all-in-one hub for business and social interactions and a potential alternative to email in the future. While certainly a lofty vision for a one-year-old startup, Symphony’s strategy must have the C-suite at Bloomberg HQ buzzing.