According to a study by NCAA, there were more than 41,000 injuries and 25 million athlete exposures from 2004 to 2009. Moreover, the same study also reported that 12.5% of injuries happen during practice.[i] In sports, many see injuries as a cost to win. However, they also cost money. MLB spent $665 million last season to pay injured athletes and their replacements. NBA teams lost $358 in 2015 to cover injured athletes; and the injury-ridden Los Angeles Lakers lost $44 million alone. While in NFL where average athlete salary is approximately $2 million, the starting team players missed 1,600 games in 2013 due to injuries.[ii]

The industry treat these losses as cost of doing business. However, with the rise of athletic performance tracking and data analytics both on and off the court, the injuries could be prevented both by using data to anticipate when and how an athlete might get hurt and by conducting practice regiment without the physical stress through VR. 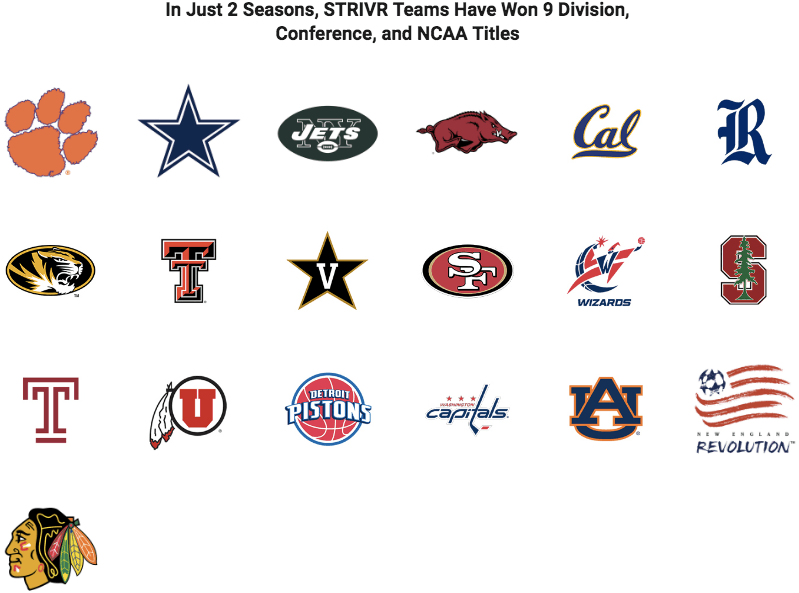 In 2015, the company was founded by Derek Belch, an ex-Stanford football player and coach, who researched about the VR development technology for his master’s thesis and Trent Edwards, an ex-NFL quarterback, who fine tune the technology for better usage on the field. STRIVR (Sports Training in Virtual Reality) is one of the pioneer in sports training through virtual reality. Sports Illustrated honored the company as the Innovation of the year, because of STRIVR focus and contribution to sports training especially football.[iii] By September 2015, six NFL teams were already using STRIVR technology: the Dallas Cowboys, New Orleans Saints, Minnesota Vikings, New York Jets, Arizona Cardinals, and San Francisco 49ers.[iv] In December 2016, the company raised $5million Series A investment round led by Signia Venture Partners with participation from BMWi Ventures, Advancit Capital, and Presence Capital.[v]

By using VR for film study, NFL players could immerse themselves more intensively into the game instead of just watching the game video like all other teams currently do. By allowing the players to run the game through VR, they could see how the game went wrong and how they can improve next time through the perspective of being on the field. VR technology is most valuable for quarterback more than other position in NFL because they can see the breakdown of the defense in real time and thus able to find an opening in that defense, so they will be more prepared if next time they are in similar situation.[vi]

Other players find VR training beneficial to train the basic throwing mechanics as well. Carson Palmer, quarterback of the Arizona Cardinals, claims that STRIVR allow him to practice his throwing motion as well, since the VR headset enable him to practice different plays from every possible angle and see the result of different elbow and arm placement.[vii] Palmer also raved about Cardinal’s implementation of VR to Monday Morning Quarterback’s Carson Palmer by commenting “It’s phenomenal. I don’t buy in to all the new technology, but I am all in on this,” then explained in detail about how training with STRIVR helped him review and improve his mechanics through realistic gameplay that he sometimes has “flashbacks” to games.[viii]

These benefits could be achieved without the same level of muscle wear and tear through conventional practices, thus both reducing the risk of injury while increasing the accuracy of players. Moreover, the NFL also trying to use VR to help players beyond their physical and mental game preparation. NFL is planning to use VR to expose players to discrimination and harassment and how to act under such situation.[ix]

As the efficacy of training with VR proven, it will attract other competitor to also create practice VR contents. With the immaturity of the field, I predict that there will be a specialized sports VR training provider for each sport. It’s the classic scaling problem whether STRIVR should go for depth in a single sport or breadth to tackle the entrance of other vendor even into other sports. Belch estimates that a third of NCAA Division 1 football programs are already using VR training technology, with 13 high-powered college gridiron teams using his company’s software.[x] STRIVR also has expanded into the NBA and NHL as well from last year. Although there will be some cross-learning from different sports to create better content, I am concern whether their funding is enough to create good enough content for an ever-expanding sports portfolio.