Spacehive is a British crowdfunding platform that funds civic projects that improve neighborhoods and public spaces. It seeks to “make it as easy as possible for as many people as possible to bring their civic environment to life.” Former architecture and urban planning journalist Chris Gourlay founded Spacehive in 2011 because he wanted to democratize urban planning, which he felt was held back by the “merry-go-round of planning meetings, consultations, fundraising rallies and paperwork.”

Spacehive encourages all project types—big and small—to use its platform. To date, the total value of funded projects is £3.8 million, with the average value of a project at £28,500. Previously funded projects include a community center in South Wales, a collective artists space in Croydon, and a papier mache Queen’s Head for a parade.

Here is how the funding process works: 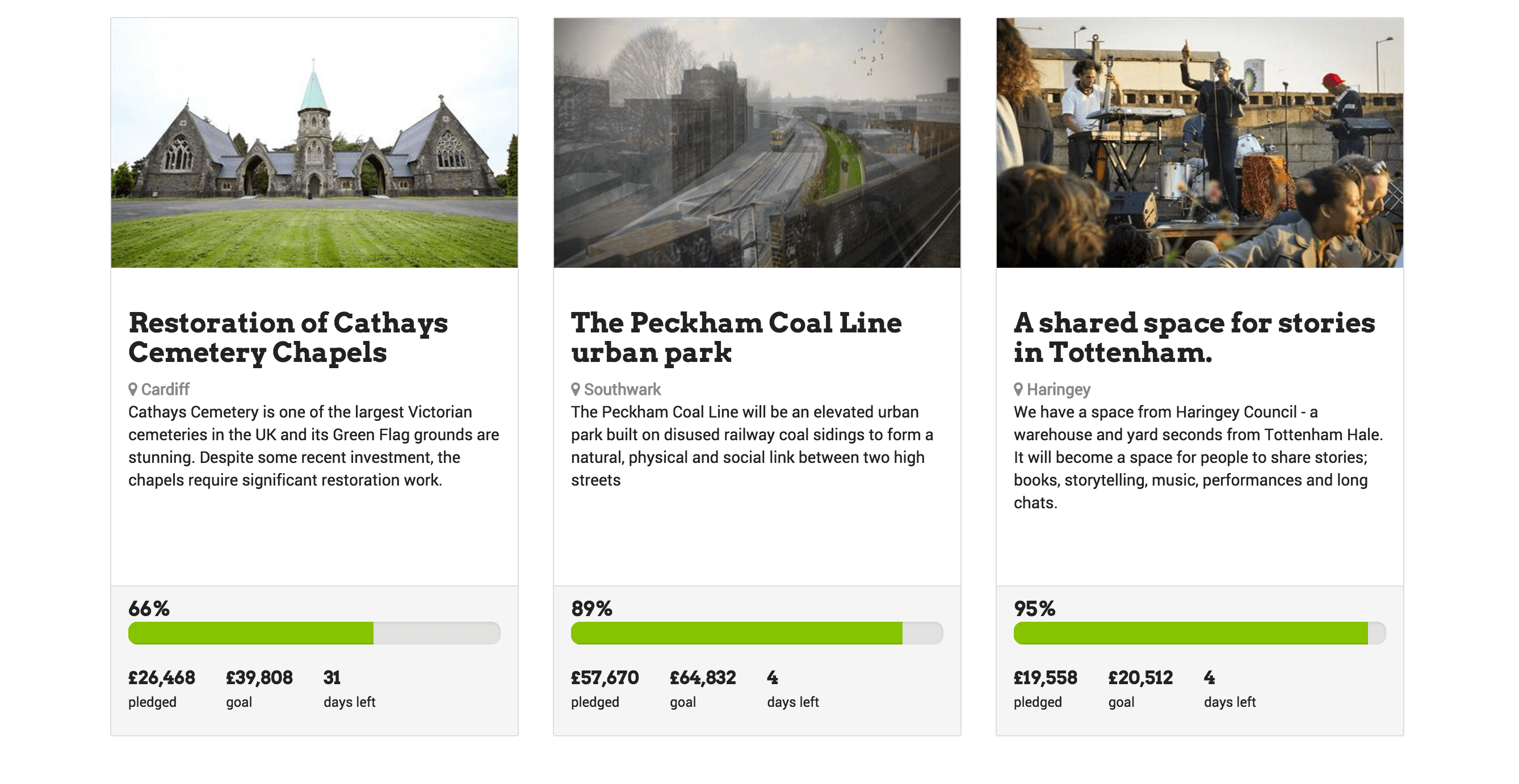 Spacehive also allows users to create hives, which are incubators for projects that “work by connecting project creators with communities of likeminded supporters—from local people to companies and councils—that want to make things happen”. There are now 35 hives on the platform, and are typically set up around a neighborhood or idea. For example, there is a Save Santa hive that collects Christmas themed projects. There is also the #MakeMCR hive, which focuses on projects to improve Manchester. Check out the video below on #MakeMCR:

Spacehive makes money through a series of fees. Although it is free to create a project, successful projects are charged a 5% commission fee (Spacehive adds the commission fee to the overall project cost so the crowd ends up paying the fee). There is also a small transaction fee for successful projects; this fee changes for each project. For example, a project funded by 10,000 small donations will have a higher transaction fee than a project funded by a single large donation. Spacehive also charges £2,000 + VAT a year to maintain a hive.

Those who contribute to projects on Spacehive are motivated by the desire to enrich their own community. The projects affect their day-to-day lives, so it does not matter that they do not receive a physical product or equity in a company like on Kickstarter or Indiegogo. Spacehive leverages community to create a sense of ownership amongst the crowd. It is rewarding, for example, to walk by a park in your neighborhood or attend an arts festival that you helped fund. Additionally, there is no minimum donation and many project goals are small, so users still feel like they are making a difference even with a small amount.

Spacehive also incentivizes participation through corporate and government partners that match the money raised by the crowd for each project. These partners include Experian and the Mayor of London.

Another challenge for Spacehive if it wants to grow is increasing the amount of projects on the site. In theory the crowd should be motivated by the desire to improve their neighborhood, but many users are busy and would rather contribute to instead of create a project. One way to incentivize project creation is to create a prize or reward for the creator if the project is fully funded.

GasBuddy: from a friendly gas price whisperer to a data analytics giant