Launched in 2005 by Will Glaser, Jon Kraft and Tim Westergren, Pandora is a freemium online radio service. The service, known for its ease of use and the ability for users to vote for songs they liked and disliked through thumbs-up and thumbs-down, became extremely popular and one of the true rising stars of the early digital music industry. Pandora, unlike many other popular digital music streaming companies, did not strike deals directly with music labels, but instead operated as a pure play Internet Radio station. The company, therefore, had to pay royalties set by the US Copyright Royalty Board. In 2009, the company launched Pandora One, a service that allowed users for $4.99 to stream the radio stations without ads. In 2017, the company launched Pandora Premium (see below an overview of Pandora’s offering).

For the years, the company was considered a shining star in the digital music space and continued to grow active users as well as revenues (see below).

A Star Is Loosing Its Shine

When Pandora went public in 2011 with a valuation of $2.6bn and a leading US market share in online music consumption, Spotify barely entered the US and was valued at $1bn, 2.6x less than Pandora at the time. However, over the last 5 years, Spotify and other music streaming companies have re-shaped the digital music industry significantly – Pandora’s Monthly Active User growth has declined and according to industry experts, Spotify will overtake Pandora in Monthly Active Users as early as mid-2020 (see below). 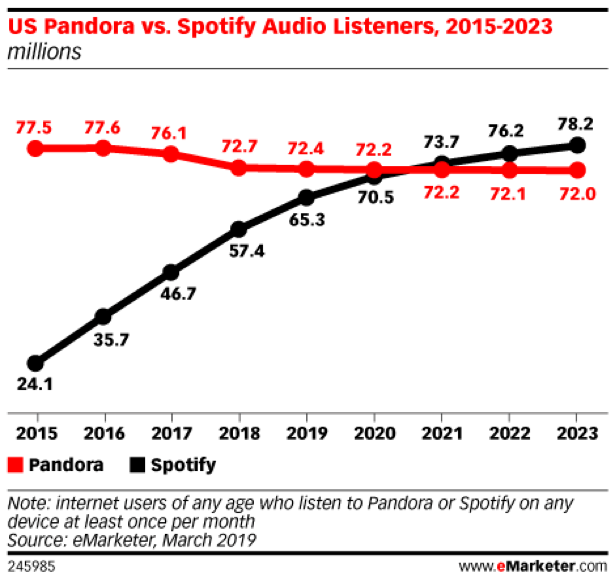 But what has happened that the clear incumbent leader is loosing its power? The below outlines the issues with the Pandora model:

Want to listen to your favorite song? Please wait.

For the longest time, Pandora’s personalized radio channels, allowing consumers to discover new music, were a big hit and helped the company grow its user base. However, then came Spotify – allowing customers to listen to their favorite songs, whenever they want, as many times as they want. At the same time, until the launch of Pandora Premium in 2017, Pandora did not allow users to skip songs beyond 30 skips in 24 hrs. Therefore, users could not listen to their favorite songs.

Sitting on a flight? Sorry, can’t get online radio.

While Spotify, Apple Music and other streaming services allow premium users to download songs and play them offline (e.g. when in a low or no network environment), Pandora, until 2017, did not allow users to listen to music offline.

Want to create your own playlist? Nah, we’ll do it.

While Pandora’s custom radio stations are a great feature for music discovery, they limit the personalization opportunities within the platform. While Spotify, Apple Music and other subscription companies allow users to create their own playlist, with their own individual songs, thereby creating very sticky consumers, Pandora, until 2017, did not allow for this feature.

The three above mentioned points show the critical importance of being close to the consumer and understanding user needs and demands in order to stay relevant in a digital world. Apart from these user-centric issues, Pandora is facing another challenge, that other players are not facing:

A global business? Nope, not possible.

While Spotify, Apple Music and other premium streaming platforms have always been striking deals with music labels directly, Pandora, as an online radio is tied to local radio laws in the countries that it operates in and therefore, has not been able to launch in any other geography than the US, New Zealand and Australia, while others have been able to create a global business.

In 2016, after years of loosing consumers to competitors, Pandora finally announced that it would give in to consumer demands and launch its own premium subscription service for $9.99 per months. It had acquired Rdio for $75m a year before and planned to launch Pandora Premium in March 2017. In 2018, the company got acquired by SiriusXM at $10.14 per share, a 37% discount from the initial IPO price of $16. It remains to be seen whether Pandora will be able to catch up with its strong competition.

Sephora – Blurring the line between Digital and Physical

Student comments on Pandora Media – from winner to loser – and back?