Founded in Barcelona in 2015, Glovo is an on-demand service platform that purchases, picks-up and delivers products ordered through its mobile app. Glovo allows you to order anything available locally and promises to deliver it to you “within minutes” (average of 28 minutes). The products are delivered by one of Glovo’s 50,000 couriers or so-called “riders”. This includes both food items (such as take-out) and non-food items (such as groceries, courier, and pharmaceuticals). The app also has an “Anything” category where users can request any item or service. An example of an order in this open-ended category could be something like: “Pick up my house keys from my husband and bring them to my office”). Glovo is available in over 25 countries across Europe, Latin America, and Africa. 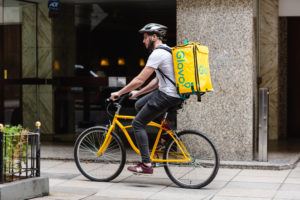 Several factors have driven Glovo’s success across its different markets. The first one is the highly effective partnership network it has established. Local merchants see the attractive value of the platform and lever Glovo as an opportunity to compete against the giant e-commerce retailers. Secondly, Glovo is affordable to its customers because the platform charges a commission to its partners for every product purchased via the app and transfers part of that revenue to its customers through lower delivery prices. The platform’s success from the customer side is further enhanced by the variety of products and services it offers. Lastly, since its founding, Glovo has followed a high growth strategy to position itself as the reference delivery application. Glovo has consistently directed capital to improve customers’ app experience and to lower its delivery times.

Glovo adds value to all parties in its platform. On the vendors side, Glovo allows physical merchants to reach a greater number of customers and subsequently increase their sales. Similarly, e-commerce merchants also benefit from Glovo by offering it as an express delivery option during check-out. The platform also provides locals with more employment opportunities to work as a freelance or part-time. Finally, Glovo provides its customers high convenience, rapid access to local goods, and a seamless shopping experience.

Glovo believes that the key to its platform sustainability is its focus on profitability from early on. Glovo’s CEO, Oscar Pierre, believes that the delivery sector is particularly difficult in Europe and that the key to Glovo’s survival is its successful fundraising, which in turn is due to its proven business model. He claims that Glovo is “obsessed about being profitable.” Glovo continuously focuses on growth, but also on getting new markets to show positive numbers as quickly as possible. In an interview with Via Empresa, Pierre described how other new entrants in Spain with similar proposals failed to survive because of not taking care of their thin margins.

The Delivery Space is Becoming Overcrowded

Despite these merits, several challenges could hinder Glovo’s scalability. On the one hand, the delivery space is becoming overcrowded with large service companies like UberEats and Cabify Express entering the sector. However, Glovo is able to differentiate from them by being the only platform in Europe that supplies its customers with anything in the city. Its small size is also an advantage when establishing partnerships. For instance, Glovo competed with UberEats and Deliveroo for a partnership with McDonald’s. Glovo’s start-up mentality allowed it to be flexible and customize a model for McDonald’s in less time than its larger, but slower-moving, competitors.

Another challenge for Glovo is how it decides to position itself versus Amazon. According to its CEO, Glovo does not compete against Amazon because its long-term vision is drastically different. While Amazon envisions large warehouses with infinite products located close to cities, Glovo wants to work and support local businesses and uses them as its warehouse.

Glovo’s successful growth story is undoubtable. However, given the increasingly crowded delivery space and high price sensitivity from the customer side, Glovo must continue to build its competitive differentiation and improve its key features (user experience, low delivery times, broad product range) to maintain and grow its customer base. Because thin margins like abundant orders, one way that Glovo is trying to do this is by becoming even more a multi-category platform. This includes establishing partnerships with large supermarkets and improving the agility of its courier orders. In Barcelona, Glovo is testing the possibility of selling via its platform last minute tickets for the cinema, football matches, etc.

Glovo’s business model has been proved by the scalability of the platform which is currently operating in over 20 countries. However, another question mark remains regarding the lack of regulation in the delivery industry. Glovo, as well as other delivery platforms including Deliveroo, face uncertainty regarding the final doctrine from the European Union’s Courts regarding the labor definition and specifics of its delivery riders. Unfavorable legal frameworks could impair Glovo’s business model and all the work its founders have accomplished so far.

Oscar Pierre: “We are obsessed with being profitable,” Via Empresa (October 2017)

Glovo is a new entrant to the on-demand economy – delivering anything from keys to nappies, NS Business (February 2019)

Stitcher Podcasts, Midroll Media, and the Art of Battling Giants

Student comments on Meet Glovo: The App That Will Deliver Anything to Your Door